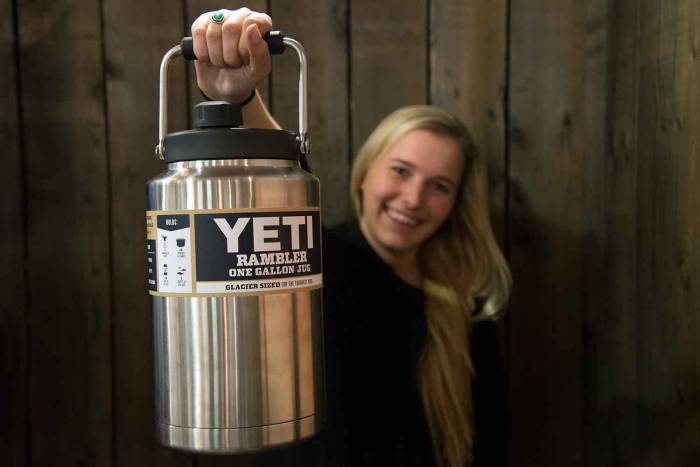 Do you need a one-gallon water bottle that could survive the apocalypse? Even YETI admits its to-be-released Rambler Jugs are over-engineered.

The stainless steel jugs are designed for “bulk hydration and multiple servings,” as the company puts it.

They come in half-gallon and one-gallon sizes, and the company uses 18/8 kitchen-grade stainless steel on a double-wall, vacuum-insulated body.

There is an inch of insulation in the lid to help keep liquid regulated (hot or cold) inside for hours.

The cap screws off and then clips on as you pour. Called the MagCap, the threaded piece secures to the unit’s lid via a strong magnet recessed in a slight depression.

How to manage the big units? YETI thought of that: To mount the oversize vessel to an ATV or boat, the company will sell a polypropylene holder for $39.99. 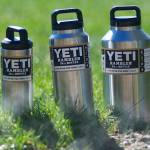 YETI's Rambler Bottles are rugged stainless steel and keep beverages hot or cold for hours. Are they worth the price? Read more…

We tried out the Rambler Jugs at the company’s headquarters in November. The units are solid in the hand, including a stout rotating handle and a big-thread main lid.

The magnetic cap is a slick idea. YETI addresses the “where do you put it?” question with the MagCap design — the threaded plug snaps onto its magnet on the lid and stays securely in place.

Today, at the Outdoor Retailer trade show in Utah the company unveiled the Rambler Jugs to the public. People crowded around the booth to see the massive metal containers.

The YETI Rambler Jugs will be sold on YETI.com and in stores starting in April.