As an editor at GearJunkie, I’ve run in probably 100 pairs of shoes over the past four years. They’ve spanned the gamut on price, and a recent study has me wondering: Are expensive shoes better?

Well, isn’t that a kick in the shorts? The study shows an inverse correlation between the cost and rating, with more expensive shoes rated worse. Check out the graph below, keeping in mind that this isn’t a scientific study and that perceived shoe quality very subjective.

As a consumer, that should open your eyes. As an avid runner (trails, roads and ultras) and gear tester, it certainly opened mine.

Price Not A Factor?

My first take-away from this number-crunching study is that price is not the only factor in shoe quality. In many ways that makes sense. 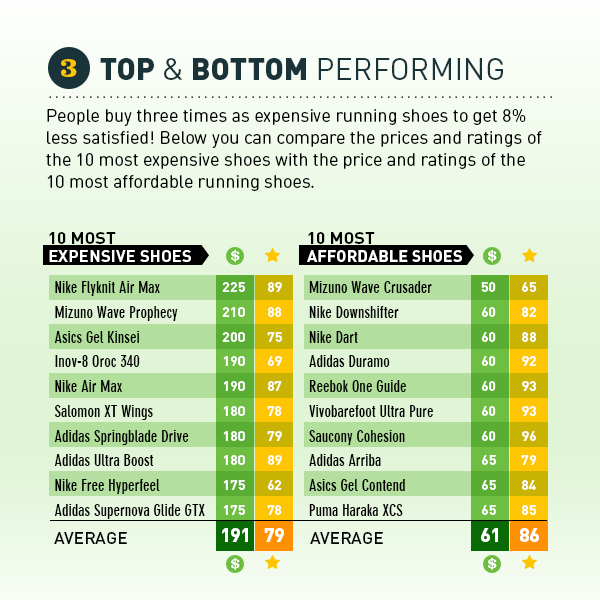 Marketing budgets are expensive. Many brands put big bucks into marketing campaigns, and while that does a great job of building brand image, it doesn’t do much for product quality.

That’s not to say brands that push marketing are not good — in fact, the top rated shoe on the site is the Salomon S-Lab Sense Ultra SG, and Salomon spends significant dollars marketing its shoes. So does Nike, Adidas, and, yes, even budget-friendly Sketchers.

But my take-away is that higher price doesn’t necessarily equal higher quality, and that less-expensive shoes aren’t always bad. 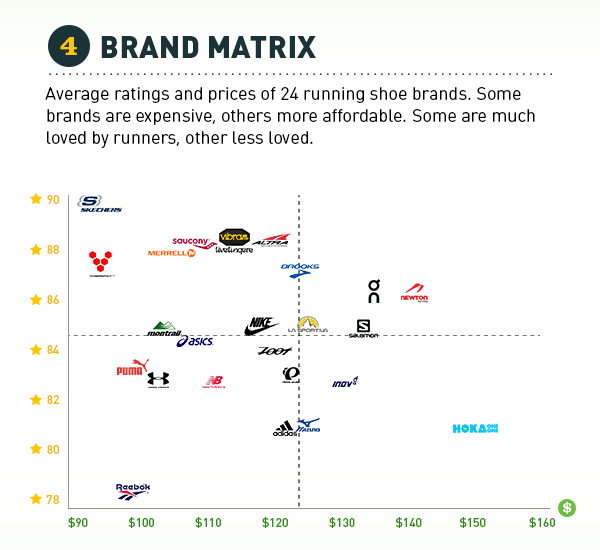 Looking at the graph above, which compares average rating with average price by brand, an interesting trend is revealed: Many of the more expensive shoes are also the most innovative and worst rated.

At the high end of the price range (and poorly rated) is HOKA. The shoes have legions of followers in the ultrarunning scene and are beloved by many. But they also have about as many haters as lovers, and that can lead to a lower overall rating.

Innovation is about pushing design, and with that usually comes unorthodox shoes that may not be universally accepted. HOKA is a prime example, with super-cush and fat shoes designed for the ultra set.

Inov-8, Salomon, and Newton Running all fall into the same high-price category, and all these shoes have cutting edge, expensive and unorthodox designs. Some will love these pricy shoes, but, no doubt, some will hate them.

Critical At The High End

I am an ultrarunner who regularly runs races well beyond 26 miles. And as a gear editor, I have nearly unlimited access to shoes for testing. But I recognize that price is a key concern for most runners, especially those who put in enough miles to need several pairs of shoes each year.

So I’m not surprised that runners who buy more expensive shoes may be more critical of the shoes they buy. If you’re dropping $180 a pair on shoes, they damn well better perform!

I talked this over with GearJunkie founder Stephen Regenold, also an avid runner and gear tester. We arrived at another conclusion: Those willing to drop big bucks on high-end shoes are also likely to be more experienced runners who are critical of small flaws in shoes.

“People who buy high-price shoes are likely more experienced runners. They have used many shoes over the years and probably have harsher and more detailed feedback,” Regenold said.

I asked Jens Jakob Andersen, founder of RunRepeat.com, if he thought the results could indicate that those who spend more money on shoes may also be more critical reviewers.

“Of course,” he said. “Higher spending will increase expectations, which is a natural correlation. But if you compare to restaurants, for instance, McDonalds does get worse reviews than Michelin-rated restaurants.”

He’s also got a good point there.

What does this mean for the runner, the consumer of shoes? Well, we don’t think this information brings us to a conclusion, but we hope it sparks discussion.

Many high-end running shoes work really well. But as we see here, so do many cheap shoes. 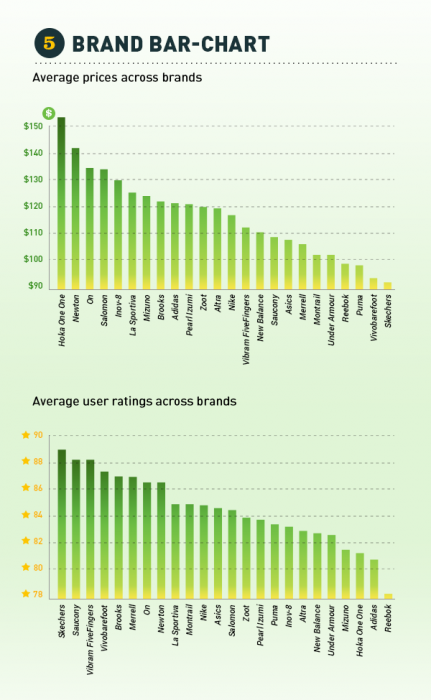 Ultimately, we give the advice to try on shoes and judge them first on their fit and feel. Look for features that are important for your style of running, such as lugged soles for soft soil, rock plates for stony terrain, a thin (or thick) stack height for your preference, and always light weight.

But maybe it’s time to look at price less as an indicator of quality. This certainly is far from a conclusive discussion on shoes, but it is an interesting window into a large group of reviews, and one worth considering when shopping at your running specialty store or online.

Learn more about the study at here.