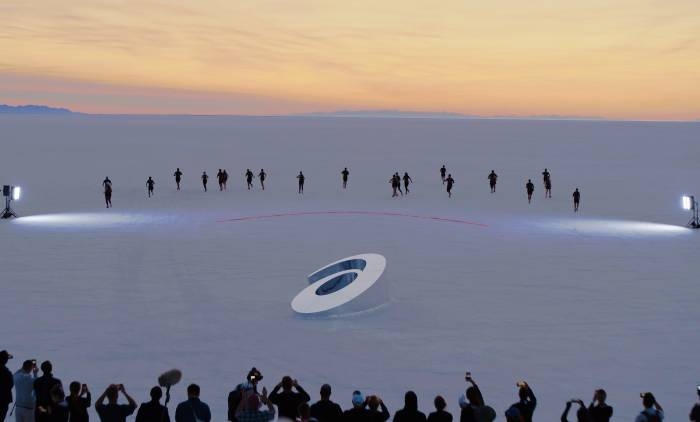 ASICS came up with a novel proving ground for its GlideRide running shoes: the Bonneville Salt Flats. Reporter Brian Metzler put them to the test in this surreal environment.

I have to admit I was still a bit sleepy and in no mood to go for a run when I boarded a bus in Salt Lake City at 3:30 a.m. with 30 other runners from around the world. 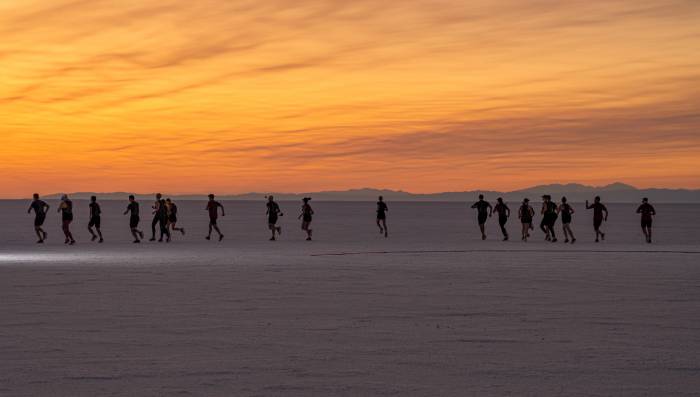 But by the time the bus rolled into Bonneville Salt Flats about 2 hours later, copious amounts of caffeine and the excitement of wear-testing the yet-to-be-released ASICS GlideRide running shoes had fully kicked in. I buzzed with energy.

Speed demons have set numerous land speed records on the Bonneville Salt Flats (think super-powered motorcycles and jet-assisted dragsters). But ASICS wasn’t trying to make this wear-testing session a race or even a super-fast run. Instead, this was going to be an exercise in efficiency based on each runner’s current fitness level.

The idea was to put runners in an environment where there would be no physical distractions — not even an official course, just a flat, smooth surface for as far as the eye can see — so they could just focus on the rhythm of running.

Over the years, I’ve tried out a lot of running shoes before they hit stores — somewhere around 1,500, I think. But I had never run on an entirely flat, seemingly endless surface like the Salt Flats before.

The GlideRide, with 2 years of R&D from the ASICS Institute of Sports Science behind it, had been touted as a shoe geared for maximum efficiency and comfort. So this was going to be interesting and fun, even if novel and a bit obscure.

“The GlideRide is all about being able to run longer, easier,” said A.J. Andrassy, ASICS global director of performance running footwear.

“We wanted to create a wear-testing event that, if we removed all of the distractions of running with no end in sight, how far could you run at a given pace? The GlideRide is all about efficiency, so we wanted to remove all of the other variables and distractions to allow runners to run as efficiently as possible.”

The key aspect of the GlideRide ($160), which debuts online and at stores across the U.S. on September 27, is a curved (or rockered) midsole design with a very stiff demeanor that helps reduce energy loss at the ankle joint and the forefoot during every stride cycle.

In that way, it shares some similarities with other innovative shoes that have hit the market in recent years, including the Nike Vaporfly 4%, Nike ZoomX Vaporfly NEXT%, HOKA Carbon X, and HOKA Carbon Rocket. But unlike those shoes, the GlideRide doesn’t have a carbon-fiber plate. 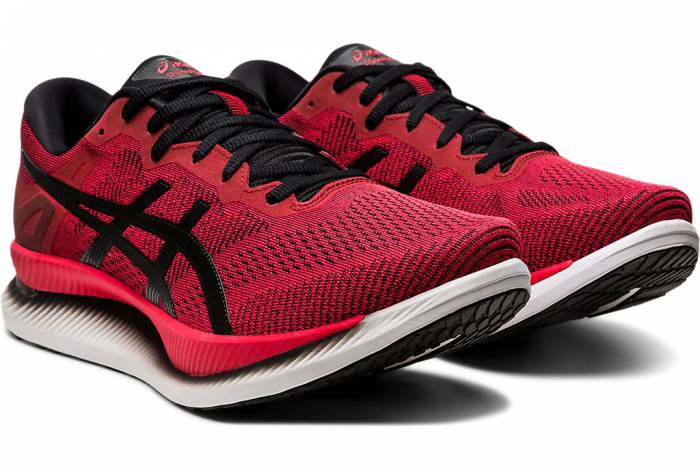 ASICS debuted its own shoe with a carbon-fiber plate earlier in the year as sort of a concept car to enhance efficiency by reducing dorsiflexion at the ankle. But the MetaRide was way too firm and unforgiving.

ASICS designed the GlideRide to be more accommodating, with a two-layer foam midsole construction. One layer is very firm and nearly inflexible EVA that helps streamline all downward energy of a foot strike into forward propulsion. The other is a layer of very responsive Flytefoam Propel that helps cushion and energize every stride.

Having run in the shoe several times before (and after) the unique Salt Flats wear-test opportunity, I believe the shoe does what it’s supposed to do — provide a smooth, moderately soft ride that enhances efficiency.

The unique design provides structured guidance through each stride cycle for maximum efficiency while also offering ample cushioning and protection. So this shoe feels good and seems to help reduce the negative effects of the blunt-force impact of each foot strike.

It took me about a quarter-mile to get used to it. But after that, I found it to serve up a consistent, natural, flowy rhythm. 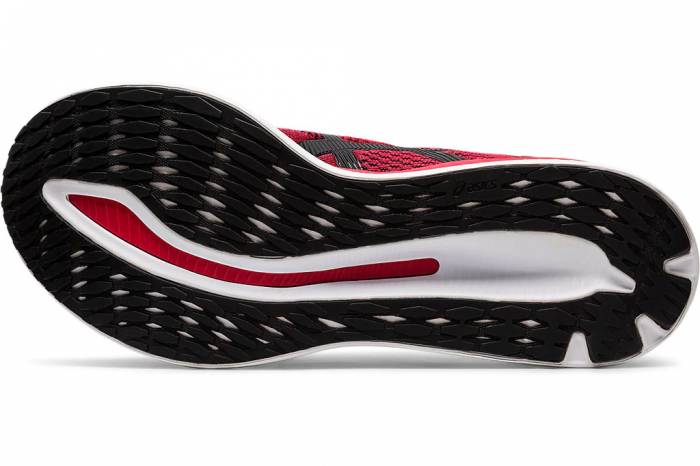 It’s also decidedly the most accommodating and comfortable of the innovative modern shoes built on a firm, curved midsole platform. The shoes with carbon-fiber plates are all geared to run very fast and, honestly, aren’t great at running slow-to-moderate paces.

The GlideRide can certainly run up-tempo paces, but its sweet spot is the moderately slow to moderately fast zone. For that reason, it’s much more accessible to, and more practical for, the majority of recreational runners.

Our group was extremely diverse, ranging from occasional fitness runners to experienced marathoners and trail runners like me, all the way to elite runners Liz McColgan, the 1991 world champion at 10,000 m, and Clayton Young, a newly minted ASICS pro who won the 2019 NCAA 10,000m title in June during his final season at nearby Brigham Young University. 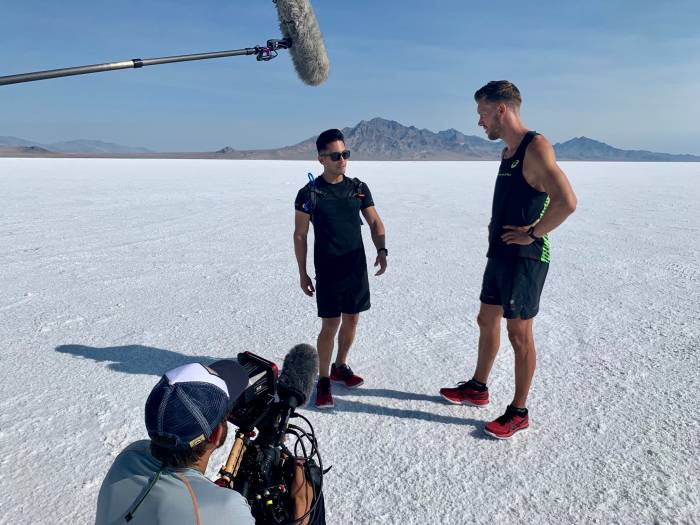 As such, the paces assigned by renowned exercise physiologist Sam Marcora ranged from Young’s 6-minute-mile pace to well over 12 minutes per mile.

I was assigned to run 8:56 pace, or just under a 4-hour marathon pace, which I was confident I could run for a very long time based on my current fitness. (Our paces were all based on a 15-minute fitness test we did on our own a week prior.)

As first light began to appear on the eastern horizon line, we laced up the shoes, strapped on a hydration pack, and stood at a makeshift starting line with the intent of running our own pace in any direction we chose. A Garmin Forerunner 245 Music watch recorded our individual data, and the Garmin Connect app transmitted it to our mobile phones for storage.

Moments before the sun rose, the starting gun sounded, and we were off and running. Running on the salt was initially easy, smooth and fun. The surface was firm except for a thin, soft crust that crumped under each foot strike.

Because ASICS assigned everyone to a different pace and we could run in any direction we chose, no one ran together. That meant we spread out very quickly.

Three faster runners (including the speedy Young) burst out ahead of me, but within 10 minutes they were all mere specs on the horizon off in the distance. The same was true when I looked back; only when I squinted could I faintly make out other runners in the distance.

As I clicked off miles, I found it very easy to run much faster than 8:56 pace — not because I was trying to run faster, but because 8:30 pace seemed so effortless and natural on the transcendent surface. My feet seemed to be rolling underneath me, fluidly touching down and lifting off with relative ease and complete lack of strain.

The GlideRide ran smooth and easy and did everything the brand said it would do out on the Salt Flats. It was as if I was running in my own private test environment with nothing but smooth, white salt, a clear, blue sky, and bright sunshine forever.

For several stretches, I even closed my eyes for what seemed like 30 to 60 seconds and just ran, focusing only on my pumping heart, my gently heaving lungs, and the rhythm of my legs. 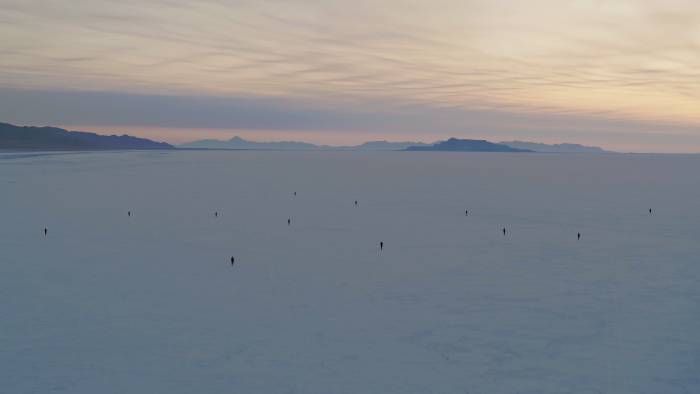 I continued running at or under my prescribed pace until all of a sudden I couldn’t. When I was all alone about 7 miles away from the starting line on a northeasterly vector, I ran in a very wet section of salt. It clumped to the bottom of my shoes like wet snow or gooey mud.

For 20 minutes or so, I was flailing with suddenly superheavy shoes and trying desperately to stomp my feet to clean them off. And that brings up my only real complaint with the GlideRide shoes, that they’re slightly heavier than I prefer for long runs. (The spec weight is about 10.2 ounces for a men’s size 9.5, which means my size 10.5s tipped the scale at about 11.0 ounces.)

I finally rectified the sticky salt situation by turning around and heading back in a direction toward the event compound. Once I found dry, firm salt, I was back to running 8:45 pace for several more miles. 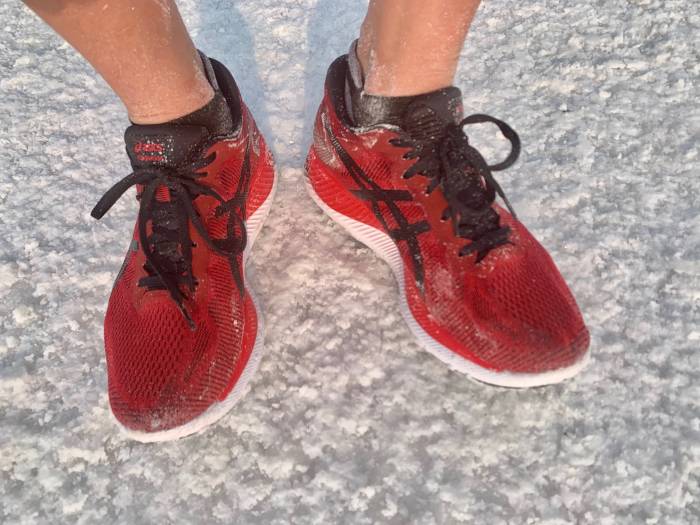 10 GlideRide Miles on the Salt Flats

As it turns out, I ran “only” about 10 miles in the GlideRide before I ended my test and fell off the pace. It had nothing to do with the shoes — it was more about an annoying bout of Achilles tendinitis that had flared up 10 days earlier.

When I was officially done, I hopped a ride back to the makeshift headquarters on a reconnaissance dune buggy. There, I learned that runners ran anywhere from 6 to 20-plus miles and had many experiences similar to mine.

“We’re really excited about this shoe because of how accommodating it can be to so many runners,” Andrassy said. “It comes at a time when there have been a lot of conversations about efficiency and energy savings, and with the products that are already out there, we believe it’s coming into the marketplace at a very good time.”

Brian Metzler is the author of “Kicksology: The Hype, Science, Culture and Cool of Running Shoes.”