Home » Footwear » Running » How to Lace Running Shoes the Right Way: 12 Variations to Fit Your Foot

Before you give up on a pair of shoes because they hurt your feet, try lacing them based on this super handy chart.

“I’ve been lacing shoes a special way like this for 23 years,” Brian Beckstead, Altra co-founder and de facto shoe-tying guru, told me. Beckstead, I learned, had not only made a career of perfecting how running shoes work — and fit — he’d gotten his start lacing up runners’ shoes working at the Runner’s Corner shoe store.

So, this reassured me I hadn’t pulled a few strings to speak with him for no good reason. Speaking with one another over Zoom, we were both looking at something I’d come across while perusing Reddit’s /r/coolguides — a trove of DIY guides and do-life-better infographics. It can be as helpful as “How to Tie the Strongest Knot There Is in Four Steps,” and as dubious as the “Guide to Cheesecakes from Around the World.”

And when I showed Altra’s co-founder the guide titled, “12 Running Shoe Lacing Techniques,” I didn’t know which variety it fell under.

“This infographic is absolutely perfect!” Beckstead assured me. “I actually lace all my shoes with the ‘heel slippage’ technique,” referencing one of the 12 pictures on the graphic.

And this helpful chart wasn’t just lauded by Altra’s brass; HOKA ONE ONE even hooked me up with Zack Paris, the brand’s senior product line manager, to weigh in.

“This is probably the most extensive list of alternatives I’ve seen,” Paris said, impressed. “People generally look for the easiest solution — but there are so many ways to do it.” He even echoed Beckstead, citing the “heel slippage” option as the most common shoe-tying variation.

Take a look for yourself — see if any of the techniques represent a foot type that matches your own.

How to Lace Running Shoes 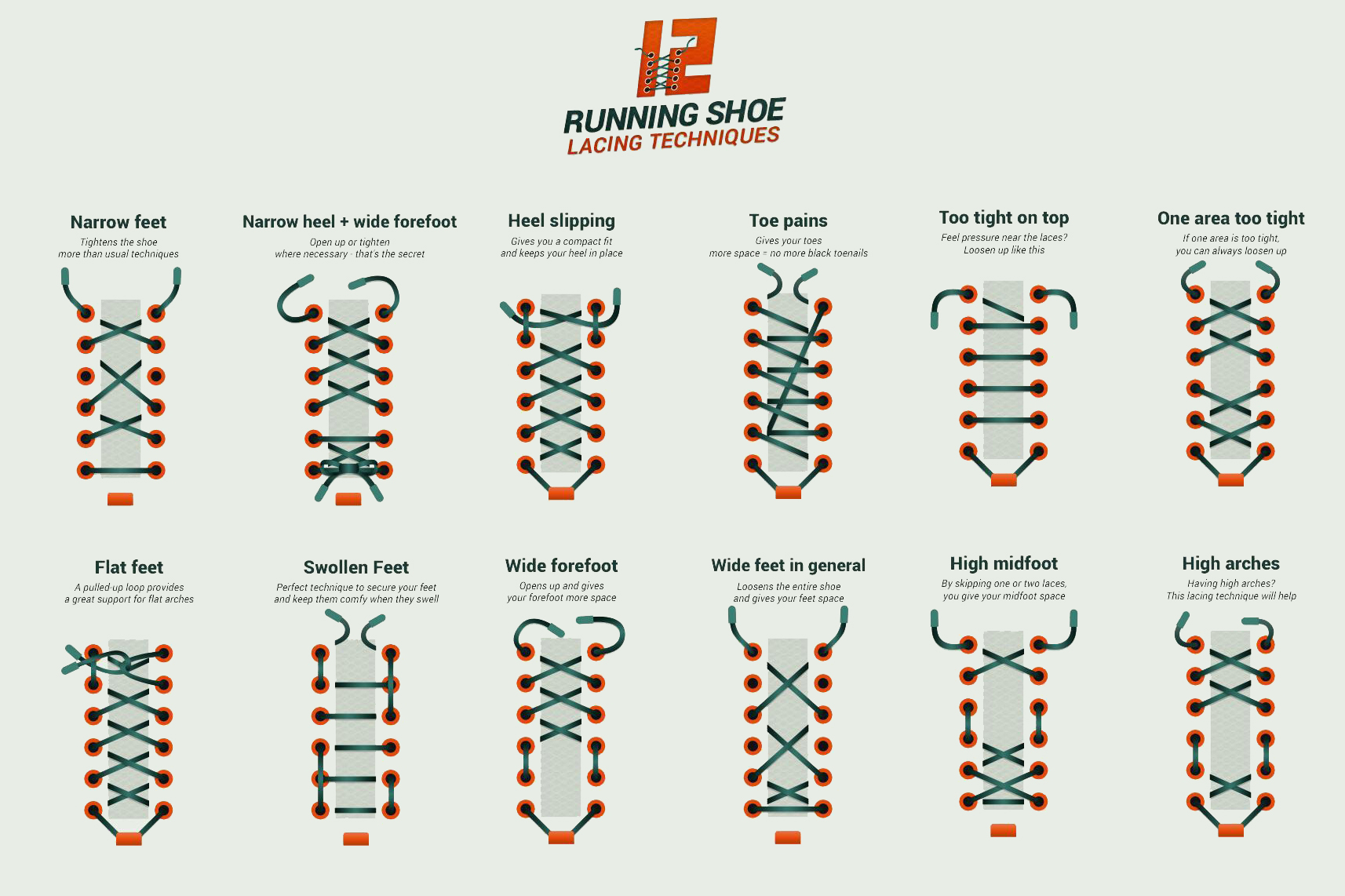 I identify with the “high-arch” and “high-midfoot” variants. So, I relaced a pair and went for a run. Anyone with a pronounced midfoot (often accompanied by high arch) probably experiences soreness on top of the midfoot after long runs. I know I do.

As my feet swell during a run, the top of my foot will start to press against the tongue. With a standard, out-of-the-box lacing, there just isn’t any give and the foot suffers.

By lacing them by skipping one or two crisscrosses, the tongue has room to push outward. And I’ve noticed my feet don’t hurt as much.

Of course, there’s a downside. In addition to adding some breathing room, my modified lace system also introduces more play in the shoe overall. That said, this is not egregious. And I can leave my gnarly trail shoes laced more for security.

Of course, both Beckstead and Paris agreed that runners should absolutely play around with their lacing technique — just not on race day.

“Try out lacing one shoe laced one way, and another way with the other — for example, one ‘high arch’ and one ‘wide,'” Beckstead said. “Experience and experimentation will help.”

And if you’re uncertain which option(s) you should try, both experts point to the surest way to find out

Read the descriptions under each variation and see if any remedies fit your ailment (and feet).