The Under Armour Flow Velociti Wind is fast, light, and unique. It’s Under Armor’s first shoe with no outsole. And we took it for a test run.

When it’s Friday afternoon and a box containing Under Armour’s latest and greatest running shoe shows up at your office, what do you do? Well, I took a run.

Granted, I’d just gotten off an hourlong presentation by the fitness giant about its Flow Velociti Wind running shoes. To say the brand sounded stoked would be an understatement. It launched with the high-energy, music-laden video presentation often brought forth by brands like Tesla. 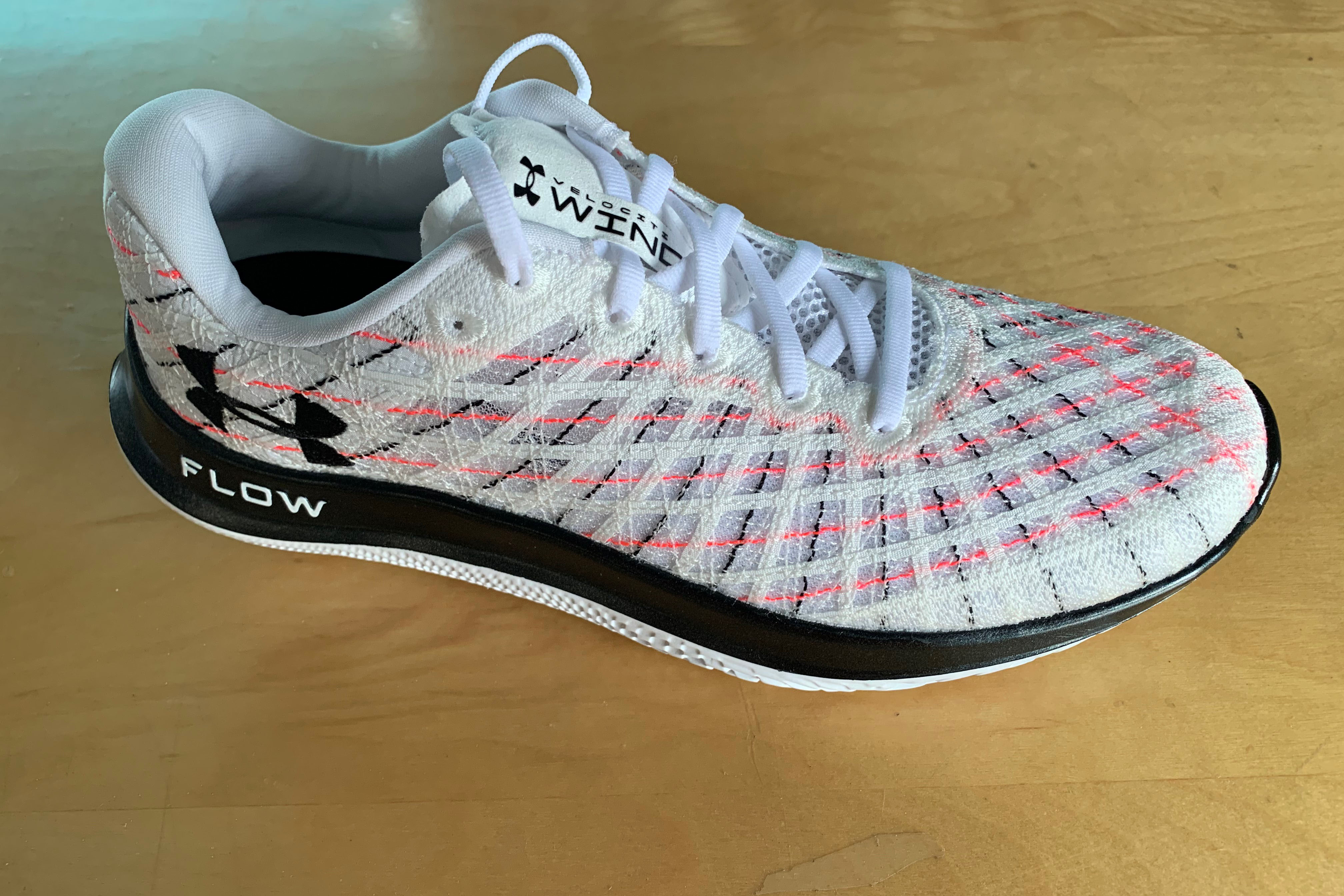 So is the new shoe up to the hype? Two miles later, I have a very, very early answer for you.

In short: The Under Armour Flow Velociti Wind saves weight and adds efficiency by removing the outsole layer of the shoe. Instead, it uses a new, durable foam that works directly against the ground to provide foot protection, traction, energy return, and cushion.

And even though I’ve only run a couple of miles in 10-degree Fahrenheit weather so far, I like it. There are a ton of details about the backstory at Under Armour.

Open the box, and the Flow Velociti Wind grabs the eye with bright-pink and black yarns woven into the WARP upper against a background of white. Pick it up, and it feels light — very light. We threw the shoe on our postal scale, and it measured in at 8.4 ounces for my U.S. men’s size 9.5 shoe.

The next thing you’ll notice is the very different bottom of the shoe. Unlike most shoes, which have a (usually EVA foam) midsole protected by a rubber outsole, this one has a thin, black “chassis” that rides on top of a one-inch-thick piece of foam. That foam provides both cushion and traction, as it faces the ground directly.

Here’s what Under Armour said about it: “UA Flow is a responsive, grippy, and supportive singular-foam compound that eliminates the rubber outsole, enabling Under Armour to create an innovative, high-traction running shoe with nothing on the market like it today. UA Flow makes its debut in the running category with the UA Flow Velociti Wind, a high-performance running shoe offering.” 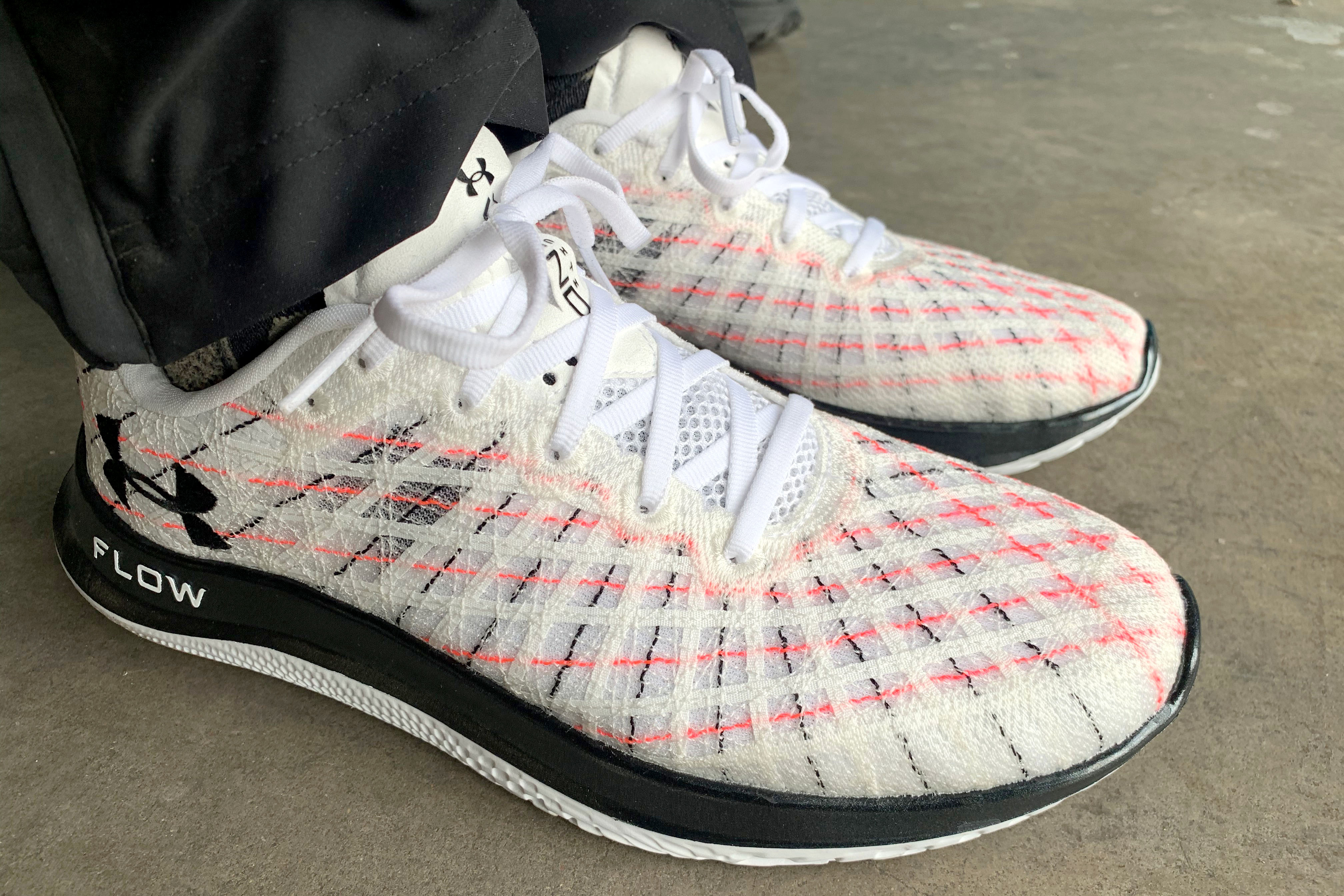 According to the brand, a partnership between Dow and the Under Armour team — including Innovation, Product Design, Biomechanics, Athlete and Consumer Insights groups, and many others — worked to create UA Flow.

Overall, more than 50 people collectively brought this new technology to fruition. And for testing, more than 130 elite athletes ran more than 11,000 miles during the product wear testing phase of the UA Flow development process.

So, how do I stack up? Well, I’m far from elite. But I do run every day. And I finished the Leadville 100. Consider me an avid but slow-ish runner. And here’s what I felt.

Lacing these up felt great. The upper wraps snuggly around the foot. And a nice bonus, the tongue feels very plush, almost like leather. It’s a great, expensive feel that gave me a solid first impression while lacing up the shoe. I tied the white laces (the shoe ships with snazzy pink laces too) and hit the road. 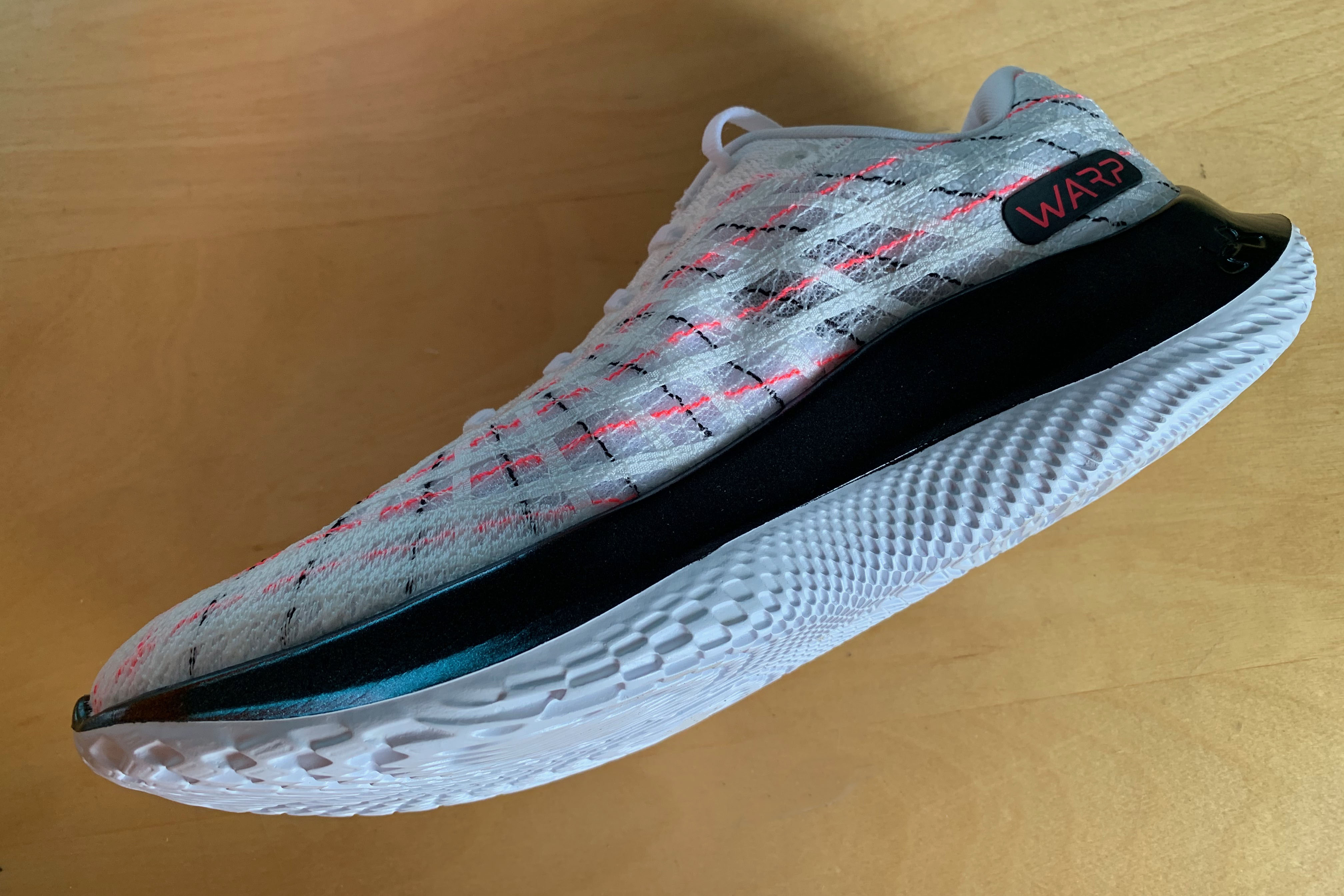 The folks at Under Armour said they aimed for a simple goal when they created this shoe: How could they make it feel like the wind is at your back with every stride?

Well, when running fast outdoors in 10-degree weather, it definitely felt like the wind was in my face. My eyes watered as I blasted around the Baker neighborhood of Denver near our office.

But under my feet, the shoes felt light, even nimble. I aimed for small rocks and curbs to step on and was impressed with the shoe’s ability to absorb the impact of sharp edges.

I try to run mostly with a midfoot and forefoot strike, but for the test, I also did some purposeful heel strikes. The shoe rolled well through all foot strikes and was surprisingly forgiving to hard heel striking.

Finally, I did some quick cutting, stops, and starts on the sidewalk to try and damage the foam. The result? It still looks brand-new after about 3 miles.

I realize this is a super-quick test, so I’ll update this article with more impressions after I get a lot more miles under my feet. But my initial impression of this shoe is fast, light, and good.

In my really brief testing, I found Flow’s rubberless outsole provided good traction on pavement and concrete, in many ways indiscernible from rubber outsoles. Under Armour claims it’s better. Time will tell.

I think it’ll be a popular shoe for those looking to move a little quicker this spring.

The UA Flow Velociti Wind launches globally on March 3 and will be available on UA.com, at Under Armour retailers, and in select running shops. You can learn a lot more about the technology at Under Armour here.

Up Next: Tecnica Cochise Boot Review: The Downhill Boot That Can Tour

Saving…
Tecnica Cochise Boot Review: The Downhill Boot That Can Tour
Kitted by Cairn: New Gear With No Commitment
×