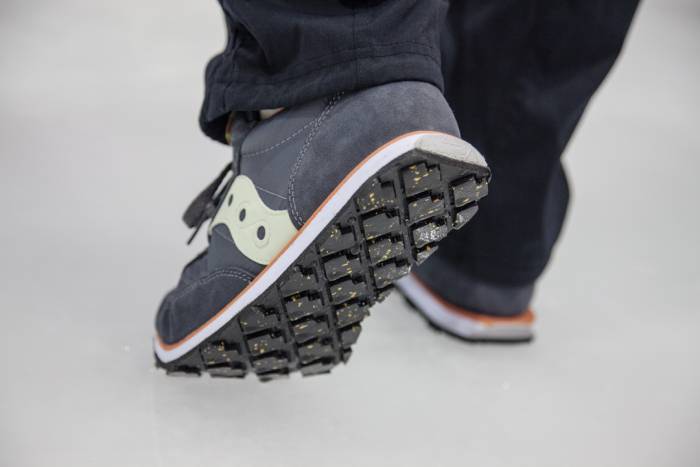 [leadin]With ‘thermochromatic lugs’ that turn blue and a name like ‘Arctic Grip,’ it may be hard to view Vibram’s upcoming sole technology as anything more than marketing flair. But just wait until you try it on ice.[/leadin]

Rubber and wet ice traditionally don’t mix. But at this year’s Outdoor Retailer Winter Market, Vibram installed a massive frozen block and encouraged people to hop on and test Arctic Grip. Almost immediately, an unrehearsed ‘WOW’ escaped the lips of the testers, as the magic rubber stuck on the slick ice with propensity rivaled by nothing short of metal spikes. It was so remarkable GearJunkie awarded it Best In Show.

Vibram says Arctic Grip gives “up to three times better grip” on wet ice surfaces than any other Vibram sole to date. We tried it and can confirm that the innovation is real. It sticks to wet ice like nothing we’ve ever used in a way that’s hard to believe. Until it comes to market later this year, here are 9 things to know about the unprecedented Arctic Grip.

The Arctic Grip compound has been in development for more than two years and was officially unveiled this past January at Winter OR.

Vibram is understandably hesitant to release too much information on what the Arctic Grip is made of, though we’ve gleaned from them that it’s a “rubber compound with an advanced filler system.” To the touch the sole feels like sturdy, grippy rubber and is said to maintain its unrivaled ice grip for over 200 miles of use. It feels a little strange on skin, hinting that something unique is going on in there.

Wolverine Worldwide, which owns brands like Saucony, Merrell, Sperry, Chaco, and more, has the exclusive on the Vibram Arctic Grip sole for the 2016 fall/winter selling season. Vibram will then offer the technology to a few more brands for retail sale in the 2017 fall/winter season.

Wolverine Worldwide is working with their retail partners to have Arctic Grip products on store shelves, not for preordering online, for the start of the Fall 2016 season.

6. Arctic Grip On Your Shoes

There are plans to have the Arctic Grip technology available for Vibram’s Sole Factor program in 2017, which means that you can send any pair of shoes to be outfitted with Arctic Grip soles.

Wet ice is the slickest surface encountered during the winter months. Vibram’s Arctic Grip technology was designed to eliminate the dangers of wet ice, but all Arctic Grip shoes will feature a sole with a mix of Arctic Grip and IceTrek (Vibram’s tested dry ice compound) that will grip to both wet and dry ice.

Each Arctic Grip sole will be outfitted with thermochromatic lugs that will turn blue when the temperature drops below 32 degrees. That technology, though relatively cool, is just for looks. Additionally, the blue or yellow specs in the rubber grip are entirely for show.

9. Broomball Regulation? To Be Determined

There’s still no word from USA Broomball on whether or not Arctic Grip soles will be banned from the sport.

We’re expecting to get our feet in an early pair of the Wolverine Crossbuck FX Ice+ boots sometime this month for a full-on review. Minneapolis, where slick, wet ice abounds on sidewalks and streets throughout the city, should be the perfect testing ground for the Arctic Grip technology.

–This post was sponsored by Vibram. Check out the company’s microsite for the Arctic Grip here.