The Garmin Xero A1i allows archers to range targets and set virtual sight pins with a single tool. This review is based on three days of testing during a recent trip to Texas. 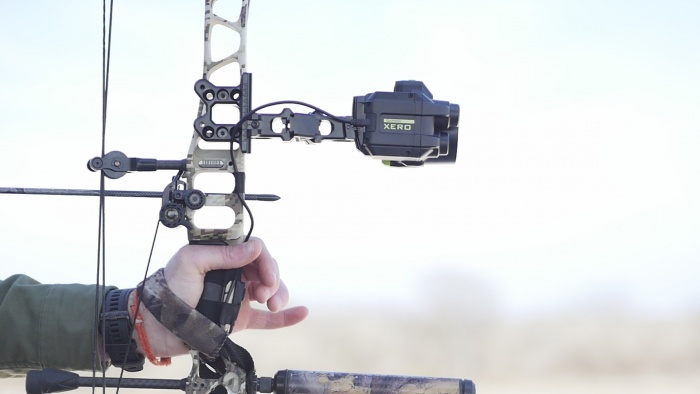 This bow sight not only tells you the range to your target, it also sets a virtual pin at the right point for an accurate shot at the given distance. It’s a major development for archery that should lead to less game being wounded and not recovered. And, perhaps the best part, it’s wild technology for a sport that’s been around since the Stone Age.

A team of 10 Garmin engineers crunched numbers over the past two years to create this laser rangefinder-integrated bow sight. The Garmin Xero made waves at the 2018 Archery Trade Association show in January, and I couldn’t wait to get my hands on one to shoot.

The A1i retails for $999. The base model, the A1, is priced at $799 and does not include the A1i’s Laser Locate technology or additional color option for its LED pins. Yes, these are a lot of money. But the fact it takes the place of both a rangefinder and bow sight may soften the blow a little.

After I covered the product release during the show, Garmin invited me to conduct a hands-on field review. The agenda was filled with familiarization, sighting in, hunts, and a 3D target competition on a Texas ranch.

Upon arrival, we had a few hours to dial in this sight to 40 yards before an evening hunt. While the multitude of features is a lot to chew on, the initial setup is not complicated.

On my bow, I strapped the new sight. A wild blur of green arrows and a red dot met my eye. This was going to be a new kind of experience!

At first it was really foreign. But the more time I spent with this sight, the more comfortable I became. No surprise, right?

While I feel confident in my shooting abilities, I’m no pro archer. The list below details my 15 hours of using the bow for this review.

The pin and reticle relation (explained later) ended up correcting slight flaws in my form. Coupled with the integrated laser rangefinder’s precise pin, my shooting improved quickly. My confidence increased as arrow groupings started to tighten up, and I began sinking arrows into small foam targets over 60 yards away.

After my 5 hours of initial practice, I was ready to head to the field.

The A1i creates a virtual “pin and reticle,” viewable when looking through the sight. While it appears to exist on the glass surface of the sight, the reticle behaves as if it’s projected about 2 feet in front of the pin.

In use, these two points behave like fixed sights on a rifle, moving in relation to one another when you move the bow from straight to torqued or angled in comparison with the third point, your eye.

Ultimately, it makes you realize when you hold the bow correctly. It really improved my shooting, and fast. The video below does a pretty good job of explaining how it works.

Setting it up is pretty simple at first. Attach the sight to the bow, then rough sight it in using hex keys like most modern sights.

Once roughed in, draw the bow and be dazzled by the view.

The visible pin and reticle optics in the sight really behave like they are on different focal planes, and you must line them up as you would with a front and rear iron sight of a shotgun or rifle.

The pin (red or green depending on your selection) is visible when ranging and is described as a rear iron sight at the end of a rifle barrel. The green reticle is a front sight and behaves as if it’s 0.5 meters into the far field. And the arrows guide you to line the two points up before taking aim.

Release the button once ranging is done, and the reticle disappears, leaving only a single pin to focus on while taking your shot. 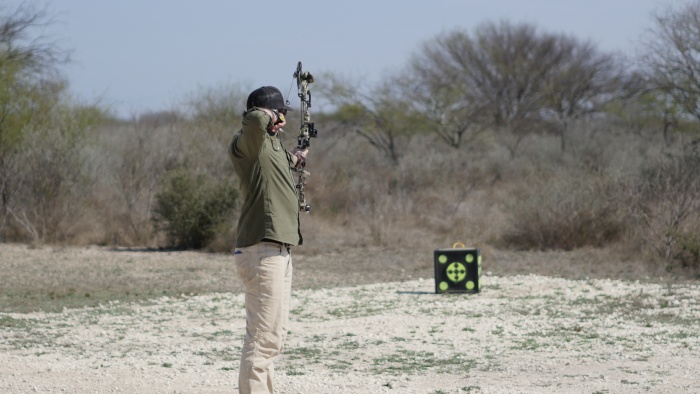 With my bow drawn, trigger button depressed, and looking into the sight field of view through the peephole, there’s a large number of small green arrows pointing towards the reticle to guide my eye in. I found this aspect easy to accomplish and noted how good my form felt when in place.

Once the pin and reticle alignment is accomplished, the pin will be inside the reticle. Once the desired target is acquired, release the Xero trigger. The sight screen will go blank except for the shooting pin for the range you just took.

From here, it’s time to maintain your target and release your breath, then your arrow. 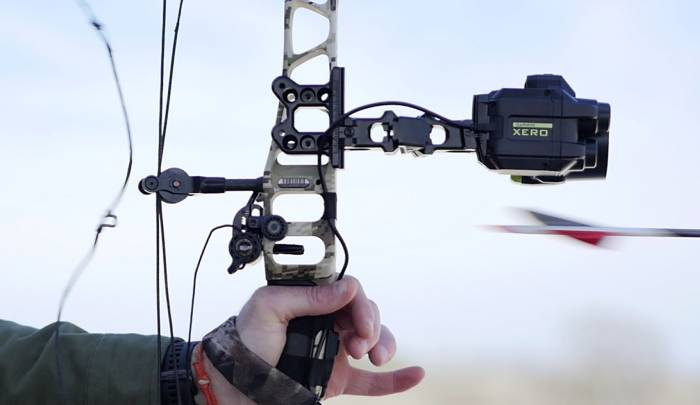 Sighting In the Garmin Xero A1i

When sighting in, the Xero A1i prompted me to shoot my first arrows to set up the closest desired pin. I drew my bow, ranged the target, released my arrow, and answered the questions on the LCD.

Did I hit the bullseye? If yes, I stepped back 10+ yards to set up the next ranged pin. If no, did I hit high or low? To answer this question, I input how many inches by which I had missed the target in either vertical direction. 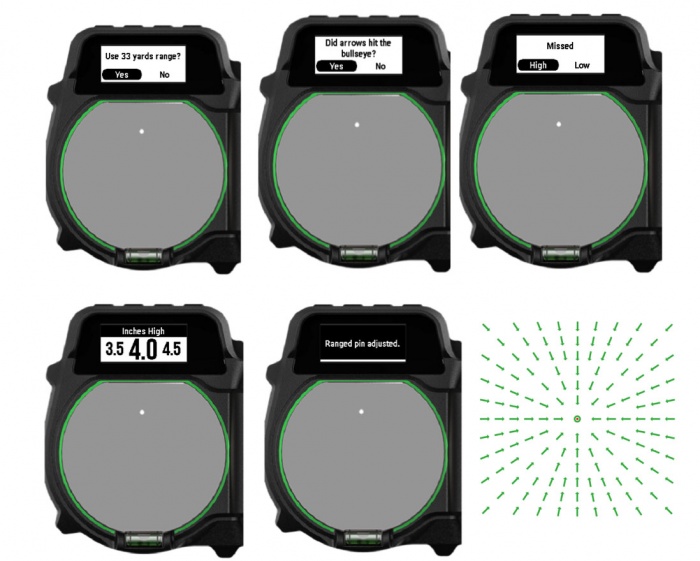 Once this was accomplished, I shot at the same target and answered the same round of questions. I repeated this process to set my pins at the maximum range allowed to acquire a target and populate a pin.

This electronic input takes the place of using an Allen wrench to manually set the range. With the Xero A1i, setting up precise pins was easier in comparison to my experiences with mechanical pins.

After I dialed my pins up to 62 yards, the sight populated a pin any time I ranged up to that max yardage. I chose a single-pin configuration, but the sight allows for multi-pin as well.

I’m a believer that the Xero A1i ranges and populates extremely well. A competition through a 3D target course tested this even further. Reporters from various media shot a series of seven targets (placed at intervals from 12 to 47 yards). Results in photo below. 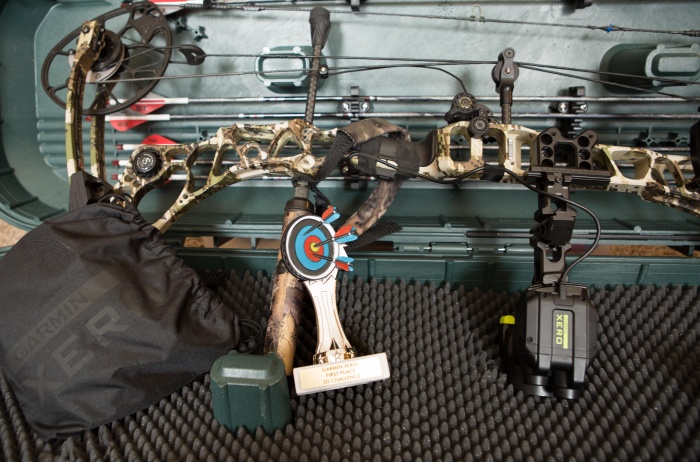 Hunting With the Garmin Xero A1i

I spent roughly 10 hours in a treestand, ground blind shelter, and natural ground blind while hunting on a Texas ranch. Our target species were feral hog and, I was surprised to learn, sika deer. Unlike the 3D target competition, hunting allowed for a variety of natural conditions under which to test the Xero A1i. 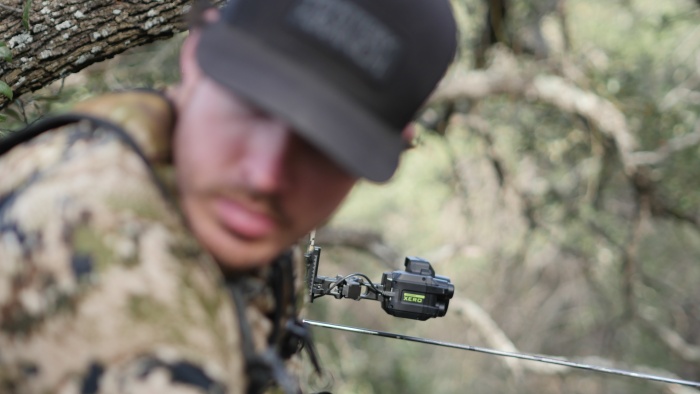 Normally, I hunt with a multi-pin sight. I’ve become accustomed to having half of my sight picture blocked by metal pins with fiber optics showing my chosen ranges. Having the field of view completely open is a blessing: I’m no longer second guessing my pin’s position.

The sight ranged extremely well while I had a choice of two sika deer within range. The animals fed slowly and moved often, allowing and denying shot opportunities. I was able to keep my bow at full draw and constantly range while depressing the Garmin trigger button.

Despite the misting conditions, the hydrophobic glass screen stayed clear from moisture. And because the glass element contains no trapped air, it’s didn’t fog while ranging the animals.

With wary animals coming into close proximity, without the Xero, drawing and letting down to re-range would have shown my location. Instead, I kept the bow drawn and ranged until I had my opportunity for a shot.

In the early morning light, I at last sent my arrow flying out of the ground blind. Direct hit! An extremely quick kill. I now have approximately 50 pounds of sika deer meat in my freezer. 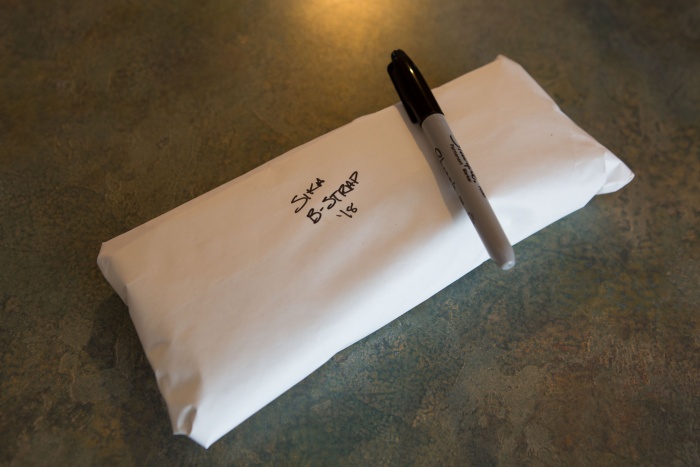 In the 15 hours of usage over the weekend spent with the bow sight, the only faults I could find were software based.

The lithium-ion batteries are said to last for approximately one year of usage, but the displayed levels dramatically decreased after only a couple days of field testing and hunting.

The other issue I found was the ambient light sensor. This sensor on the front of the sight measures incoming light to adjust the brightness of the sight display. Unfortunately, while target shooting, and once in the hunting blind, I found the display to be far too dim to use. After scrolling through the sight menu and readjusting, the brightness returned to appropriate levels.

These two issues are known by the Garmin team. With a ship date of late March for these products, Garmin says that both the battery readout and the ambient light sensor issues will be fixed and the software updated before the Xero hits the market.

The Garmin Xero A1i will, at least for now, not be legal in every state. Clarifying several states’ stances on this sight will likely require some legislative action, as it’s the first of its kind to market.

The big hangup for some states is that the A1i may be considered electronically lighted, as it creates light via electronics. It does not have an external light, but light is projected into the shooter’s eye.

It’s hard to know how this will play out. Just be aware that it may not be legal everywhere at this time, and consult your local regulations closely before taking it afield.

While I haven’t taken the Xero A1i out to experience all of the features and see it perform in a variety of real-life situations, I can honestly say I’m blown away by my experience. The time on the range, a successful hunt, winning the 3D target competition, and playing with multiple ranges during trip downtime gave me a great first look at this product.

For target shooters and hunters alike, the sight lives up to Garmin’s claim: “It takes the guesswork out of the shot.” What does this mean for the end user? More points for the range, or a precise shot placement when hunting for your favorite game species.