I’m not a betting man, but I’d bet 2023 will be the year three big things happen in the knife world: American-made production knives start making a comeback, 154CM becomes popular again, and crossbar locking mechanisms show up in a lot of knives without butterflies in their logo.

The first knife that boasts all three of those seemingly wild claims, as well as G10 handle scales and a deep carry pocket clip, comes from CRKT — it’s known as the “Definitive.”

Designed by knifemaker MJ Lerch, the Definitive looks like 8.5 inches of something that looks straight from a fantasy novel. It is long and thin with swooping lines that carry into the grind of the 154CM blade.

The design is deliberately aggressive but it’s also well-thought-out. The G10 handle scales, a third of which are cut out to expose the blade, also act as the structure of the Definitive and help keep the overall weight down.

In the end, you’re left with a lightweight folding dagger of sorts with an increased grip that’s the brainchild of one of the few well-known female knifemakers on the planet — and that’s made in America.

In short: Overall, there’s something enchanting about the Definitive’s boiled-down build, bereft of a steel frame, that keeps me wanting to test its might more and more. I carried the Definitive around for a couple of weeks as my EDC and it was a lot of fun. It totally took me out of my comfort zone, like listening to Pantera around your (sheltered) cousins. But, in the end, I kind of miss not having it in my pocket anymore because it worked so damn well. It is, put simply, a badass.

One of the first CRKT knives to feature the brand’s Crossbar Lock, the Definitive lacks the traditional steel frame that most folding knives have nowadays.

Instead, it relies only on a pair of G10 handle scales, a G10 backspacer, and an average-sized pivot screw to remain rigid and ready for use.

I love to see 154CM employed as a lanky, drop point, hollow ground blade. In this form, there’s no doubt that you could put this knife to the test without worrying about the blade chipping, cracking, or even dulling.

That’s the beauty of 154CM, which hasn’t seen much action since steels like M390, S35VN, and 20CV have taken over the production knife world.

When I took the Definitive out of the box, I immediately thought I should cast a spell with it, or maybe take it along to help my buddy drop a ring into a lake of fire.

So I just stared at it for a while. I put it on the table and played with it whenever I passed by. I couldn’t even talk about this knife when it arrived, because CRKT hadn’t yet announced it.

And then, one day, I just started to fidget with it … nonstop.

At first, the Crossbar Lock was a little sticky, and a couple of times I got pinched by the notch machined into the back of the blade for that lock. But all the while, the blade flicked out with ease and determination.

Then I started comparing it to other knives I had in my pile. I realized that I was drawn to the Definitive’s aggressive design.

It’s a mean-looking knife. The stonewashed blade has a pronounced notch and false edge on the spine — this gives it that mythical, fantasy look I can’t seem to shake.

I’m a very traditional knife person, but here I was enchanted by a knife that could come with a D&D Dungeon Master’s Guide.

I was impressed by the fact that the only thing holding this large knife together, without any flex that I could find or create, was two slabs of stylized G10, a G10 backspacer, a single barrel spacer, and a standard pivot screw.

The Definitive, by design, is a knife outside of my wheelhouse and I was under its spell.

Knives like the Definitive aren’t visually practical in the outdoor world. They look like they should be riding along in a pair of leather chaps, not a pair of Edgevale shorts.

But that’s kind of the point of this knife — to get your attention and get the job done, whatever that job may be.

As far as carry goes, the Definitive sits deep in your back pocket. Due to its narrow profile and lightweight design, it rides along your pocket’s inside edge until it’s time to put it to work, and work it will.

At 3.7 inches, the blade on the Definitive is a long, drawn-out drop point that slides through materials with ease — almost too easily — thanks to its hollow grind. And with 154CM steel, it’s nice to know that feeling won’t fade away anytime soon.

The Definitive benefits from being a great stabbing knife that’s also a solid slicing knife. Though I didn’t have the opportunity to do so, I expect this knife could gut and skin a deer proficiently. And because your grip increases on G10 when your hands are wet, it might not make a bad choice for your next hunt.

I’m not very nice to the knives I test out, but this thing still looks like it just hopped out of the box — that’s no fluke.

When you’re not using it, you’ll be happy to have it with you simply because it’s not dull or mundane. And it most certainly doesn’t look like the knives your friends flick out around the campfire. 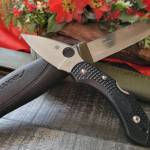 Shopping for Your First Knife: How to Pick the Perfect Blade

Consider steel, size, and intended use to pick the ideal knife for you (or someone else). Read more…

Being made in America from premium materials — and only demanding $215 at retail — will keep the Definitive in the CRKT line-up for a while.

Its size balanced against its weight, then compared to all of the tasks it can perform, make the Definitive worthy of a spot in your pocket.

The Definitive is a fun and fidgety knife. It’s the kind of knife you take out and talk about because it’s so dramatic. But it also proves so effective you may find yourself slicing through pieces of paper with it just to get a reaction — even if just your own.