Steel, style, and handle material will certainly factor into your knife-buying decisions. But when picking a folding knife, the deployment method is just as important.

Today’s modern knives are marked by one-handed deployment–that is, you can open the knife with one hand. Those that require two hands to open, while sometimes beautiful and good, tend to be dated (which is something you may actually like). Auto-opening knives – colloquially known as switchblades – are readily available. But due to legal restrictions and increased complexity, there’s really not much point in pursuing them.

There are about a dozen ways to get a knife open with one hand, but here are a few of my favorite, and most common, deployment methods: 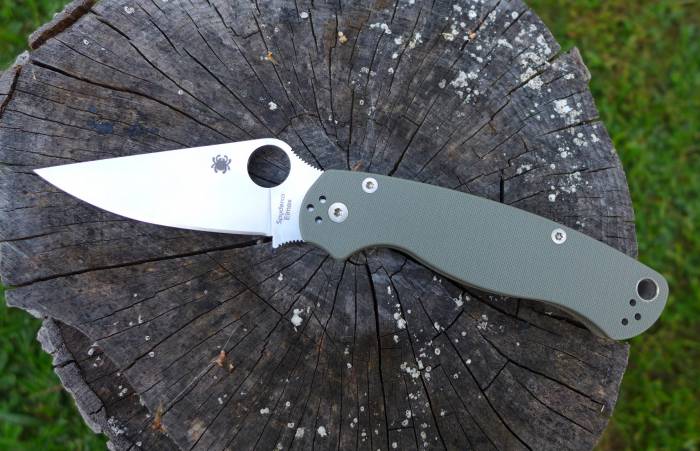 Spyderco released its C01 Worker in 1984. It was the first production knife to use a thumb hole to open the blade. The result was a design and ergonomic revolution. Before the Worker, open handed deployment relied on a thumb stud. It was usually an ugly addition to a blade and required a bit more finger dexterity to use.

With a thumb hole, the pad of your thumb is completely surrounded, making it hard to fail opening the blade. It also has the advantage of making the knife a bit lighter and, in the case of many Spyderco models, it gives a natural thumb ramp to rest on when the knife is in the open position.

Other companies use thumb holes as well, some identical to the Spyderco thumb hole, like the one found on the Benchmade Mini Grip. Others, like Strider, use an oval hole, which works but doesn’t allow for as smooth of a deployment in my tests. Two thumb hole knives standout — the Paramilitary 2, with its extra large hole, and the Dragonfly II, which has an amazingly ergonomic handle.

Flipper knives were popularized by the late Kit Carson. He then incorporated the design into his production collaboration with CRKT in the form of the venerable M16 line of knives. The design really took off when custom-makers combined it with two other innovations: The bearing pivot and the framelock.

Titanium framelock flippers dominate the custom market and many production companies have followed suit. These are easy, one handed deploying knives and they happened to be fun to play with, especially if you find a smooth flipper. For example, I really like the flipping action on the Kizer Gemini, a production version of the Ray Laconico Jasmise.

They may look old fashioned and require two hands, but nail nick knives are unlikely to ever cause a stir. There are a few different variations — the crescent nick is the most common, but there are file cut, and French cut designs that also work well.

I really like a nail nick because it doesn’t detract from the overall lines on a knife. Some knives just look and work better with a nail nick. Just don’t expect to open that knife quickly. I like the nail nick on the Canal Street Cutlery Boy’s Knife as well as the sneaky one-hand opening nail nick on the AG Russell Medium Barlow.

If you have the need to open your knife fast, as fast as possible, either for an emergency rescue or in self-defense, then the Wave, developed by Ernest Emerson of Emerson Knives (here is a good interview with Emerson), is the absolute fastest way to open a knife.

The trick is that you both retrieve your knife from your pocket and open it at the same time, making a well-designed Wave even faster than an auto, which requires separate actions for retrieval and deployment.

The original Emerson Wave works well, especially on a knife like the CQC-7. Other companies have similar retrieval opening designs like the Cold Steel thumb plate, seen on knives like the AK-47, and the DPx HEST’s bottle opener/retrieval opening device. My favorite Wave variant is found on the licensed collaborations between Spyderco and Emerson. The Delica and Endura both have very good Wave versions.

A small lug on the blade near the pivot used to “grab” your thumb and open the blade, when done well, as such on the DPx Gear Urban, studs can be very good, almost invisible and thoughtless to use. When done poorly, they are frustrating, hard to use, and, in some cases, a killer on your thumb.

For me, thumb stud deployment is something I accept on an otherwise great knife and not something I search for when buying a new blade. They work, but the other deployment methods listed here just work better.

These methods of opening a knife are my personal favorites among the dozen or so ways to get to your blade. When they are implemented well they make using your knife an instinctive act, allowing you to focus on the cutting you need to do, instead of where your fingers are or how they affect the folks around you.

Up Next: First Look: Iconic Opinel Knife Gets Survival Upgrade