The brand Giant Mouse first hit the market in 2016, and its knives are on point. We put the GM2 to the test. 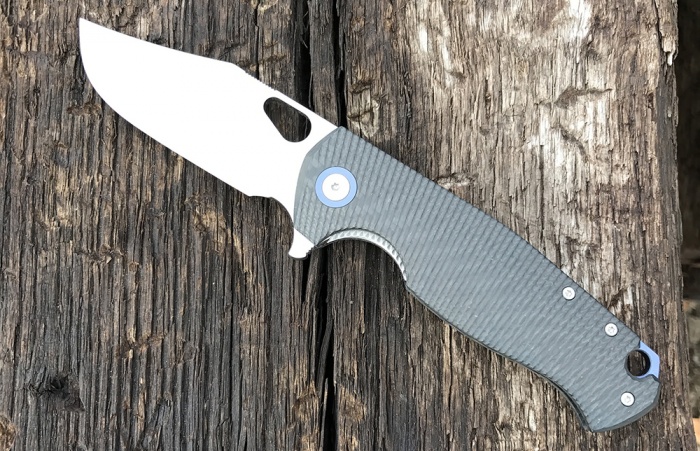 If you were starting a new knife company in a market chock full of awesome blades, how would you do it?

A good start would be to go to the Italians; their machining capacities are up there with the best the U.S. and Japan have to offer. Then, hire one of the top knife designers like Jens Anso and Jesper Voxnaes. Logistically, you’d need a game plan with clear, understandable product lines and tight controls on the numbers made.

If you did all of this, you’d be Giant Mouse, a knife company that released its first blades in 2016, much to the thrill of enthusiasts. This is a review of the brand’s latest folder, the GM2.  I used the carbon fiber version straight from Giant Mouse. This review sample is a pre-production knife.

In short: The GM2 is a beautiful blade made from some of the best steel available. Its drawbacks present in its feel, especially with everyday use. But for occasional tasks and dependability, it’s a solid option. Finally, a whopping $325 price tag will deter all but the most enthusiastic (and cash-flush) knife lovers. 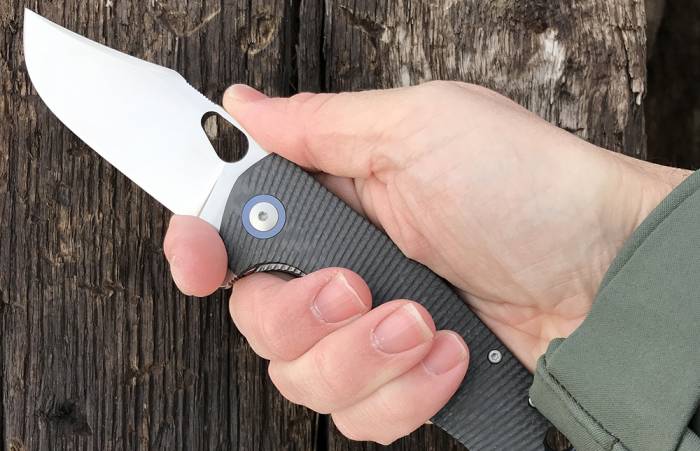 The GM2 is a mid-size folder with a 3.3″ blade of M390 steel. It flips on a bearing pivot, providing super smooth action when opening and closing the knife. The pivot is a piece of blue anodized titanium.

It deploys via a flipper tab or a thumb hole. The knife handle is groove-cut carbon fiber. This is a liner-lock knife, and both the lock and the liner on the other side are made of titanium, nested in the carbon fiber.

The rear of the handle includes both a color-matched anodized aluminum-titanium sculpted pocket clip and a backspacer/lanyard hole. The blade is a classic clip-point blade with a very nice forward finger choil and purposeful, strategically placed jimping.

Overall this knife is a marvel of manufacturing. There is not a single stray mark, loose component, or unfinished surface.  As with many of the knives made in Italy, the GM2 is simply stunning. It should be, considering the $325 price tag will make many folks balk.

But you get what you pay for. The blade steel, M390, is one of the best steels on the market for 2017. Its all-around performance — corrosion resistance, toughness, and hardness — rivals anything else out there.

The carbon fiber handles actually serve a purpose: weight reduction. Despite having only a 3.3″ inch blade, the GM2 is a big, thick, chunky knife. Without carbon fiber, this thing would be a beast (its all-Ti brother, the GMP2 weighs 6.6 ounces).

As is, it tips the scales at 4 ounces. Overall the handles are quite grippy, even when wet or cold.

The forward choil is excellent, giving an immense amount of control over the blade. Just in front of the thumb, there is a run of machining called jimping, that, combined with the choil allows you to really lock on the blade during use.

You can, of course, choke back on the knife and use a normal grip for cutting that requires more power and less precision.

Normally, I find the aggressive look of a clip-point blade off-putting, but here I am actually quite impressed with how the knife looks and works

Called clip points because the blade shape appears as though a part of the spine was “clipped” off, they are most often seen on fighting blades like bowie knives.

The wide, fat blade seems to mute the aggression a bit, and the clip gives the knife a bit of visual flare and, again, reduces the weight (light knives are quicker and that’s one reason why clip blades are favored for fighting).

This Swiss Army Knife Is Made From 24 Cups Of Coffee

The thumb hole works, but the real star here is the flipper. I found the tension in the knife between the closed and open position perfectly balanced. I never accidentally failed to open the knife when using the flipper and a forced fail was quite difficult to do.

A strong detent and a smooth rolling pivot all help to give the knife quick deployment and a high-end feel. The flipper tab’s shape also aids the process. 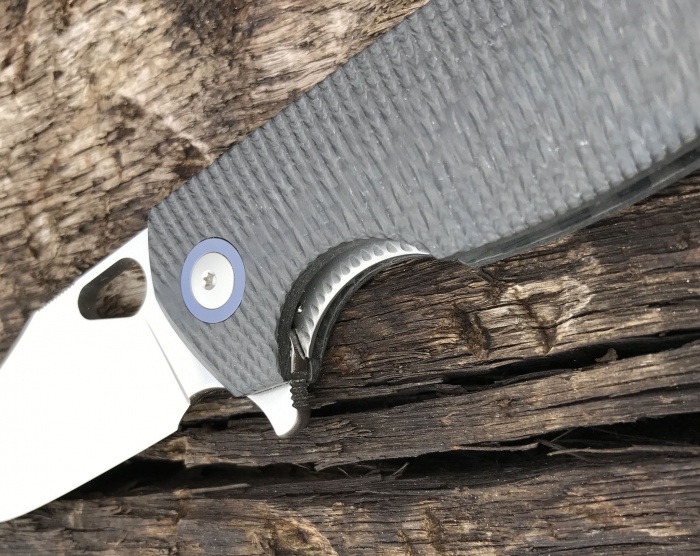 The lock was very secure, with the liner being quite thick. I had no problems with the lock holding the blade open. My only issue was disengaging the lock; it was a chore given how tight it was and how little access I had to the lockbar itself.

Finally, the pocket clip, while visually striking, wasn’t my favorite part of the knife.

It’s a bit too pointy, both in the pocket and the hand during use. It also lacks enough spring to really make it a clip. Instead, it basically functions like a hook. The GM2 doesn’t have the worst sculpted pocket clip ever, but suffice to say, I can’t wait until this trend ends.

Overall, I found the GM2 to be a wonderful knife. In actual cutting tasks, the wide blade allowed for an excellent grind and the M390 sang with each rip or slice.  From grapes to wood to packaging and cardboard, the GM2 did great on cutting tasks.

The pocket clip caused quite a hotspot, so I’d either remove or reshape it.

I loved the choil and conventionally placed jimping. They work well together.

I am not a huge fan of the lock. It’s just too difficult to disengage smoothly. In the end, the bones of greatness are here and if you don’t use the knife a lot or do heavy cutting chores, the drawbacks will not be evident.

The finish is superb and the look is nothing short of enchanting. The blade is great, but not perfect. As for a final assessment, between buy, try, and skip this is clearly a “try.”