As part of a renewed emphasis on higher quality, the longstanding SOG Aegis AT gets new steel and a burly handle in 2020.

SOG recently revamped most of its evergreen designs, including the Flash, the Trident, and the knife that is the subject of this review: the Aegis. The Mini Aegis, with its fantastic blade-to-weight ratio, has been one of my most recommended knives for a while — a stellar combination of slice-y blade, great carry, and budget-friendly pricing.

The new Aegis AT loses some of that but comes away as a different and fundamentally sound blade. 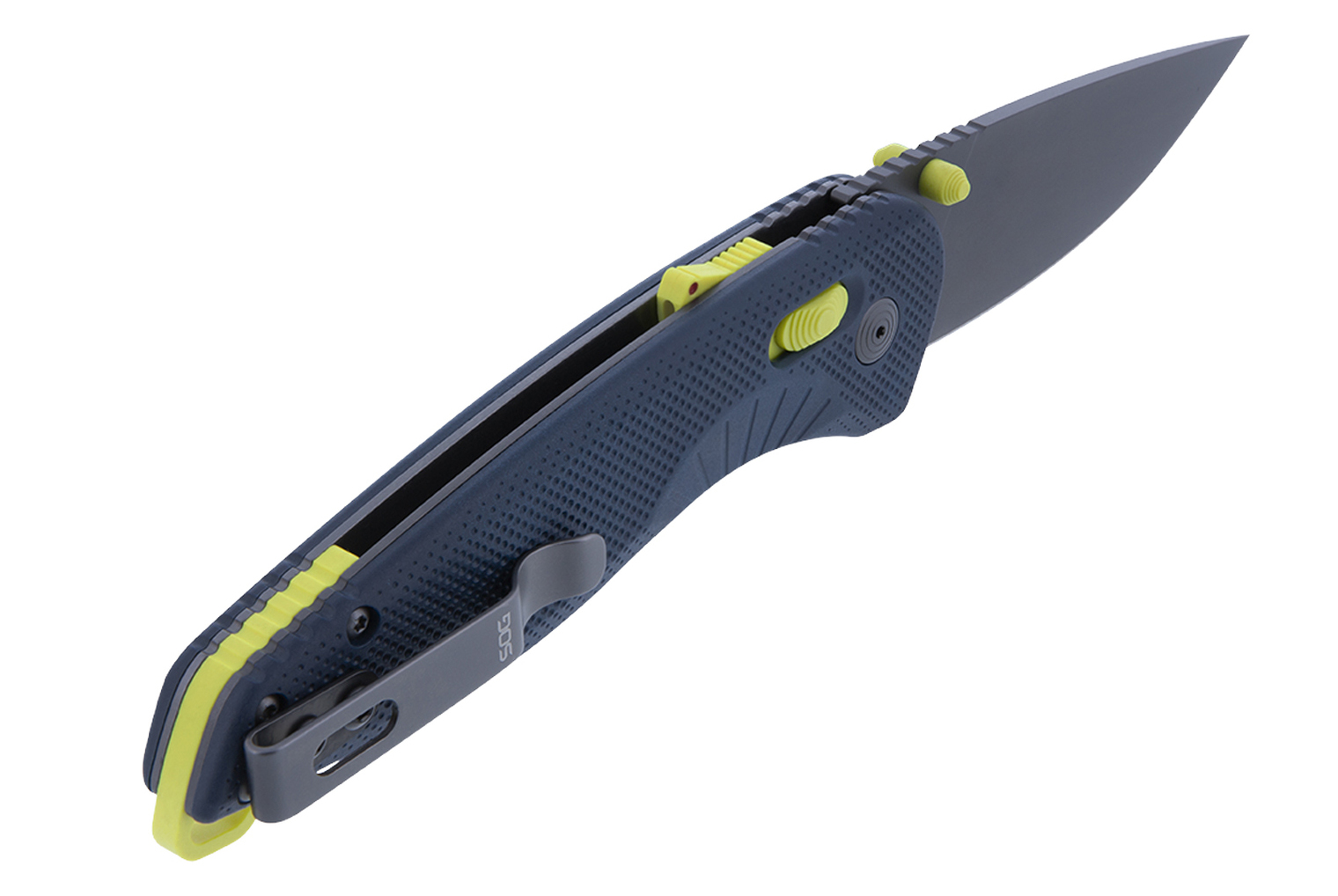 The revamp of the SOG line introduces new base-level steel: D2. D2 is semi-stainless steel (with a chromium count at 12% and the stainless threshold usually at 14%). It also introduces new colors, including the one in this review. The splashes of color are not just for looks (though I do like the looks).

Like with many high-end tools (including my favorite brand, Festool), the colored components are things you interact with when using the knife. Finally, the brand has tweaked some of the lines of the evergreen models, with the Flash being almost entirely new and the Aegis being largely the same.

For the Aegis, that’s a good thing.

This knife is a large folder that uses a sliding bar lock (also called an XR Lock by SOG and functionally similar to the once-trademarked Benchmade AXIS lock — the trademark expired) and an assist to open the blade. The assist here is powerful. Not only is the bias toward closure strong, but the blade pops open with authority.

If you need your knife to open the first time every time and you can’t fidget with flippers or small holes, the Aegis AT’s assist will work. For people who use gloves at work, this is a huge plus. 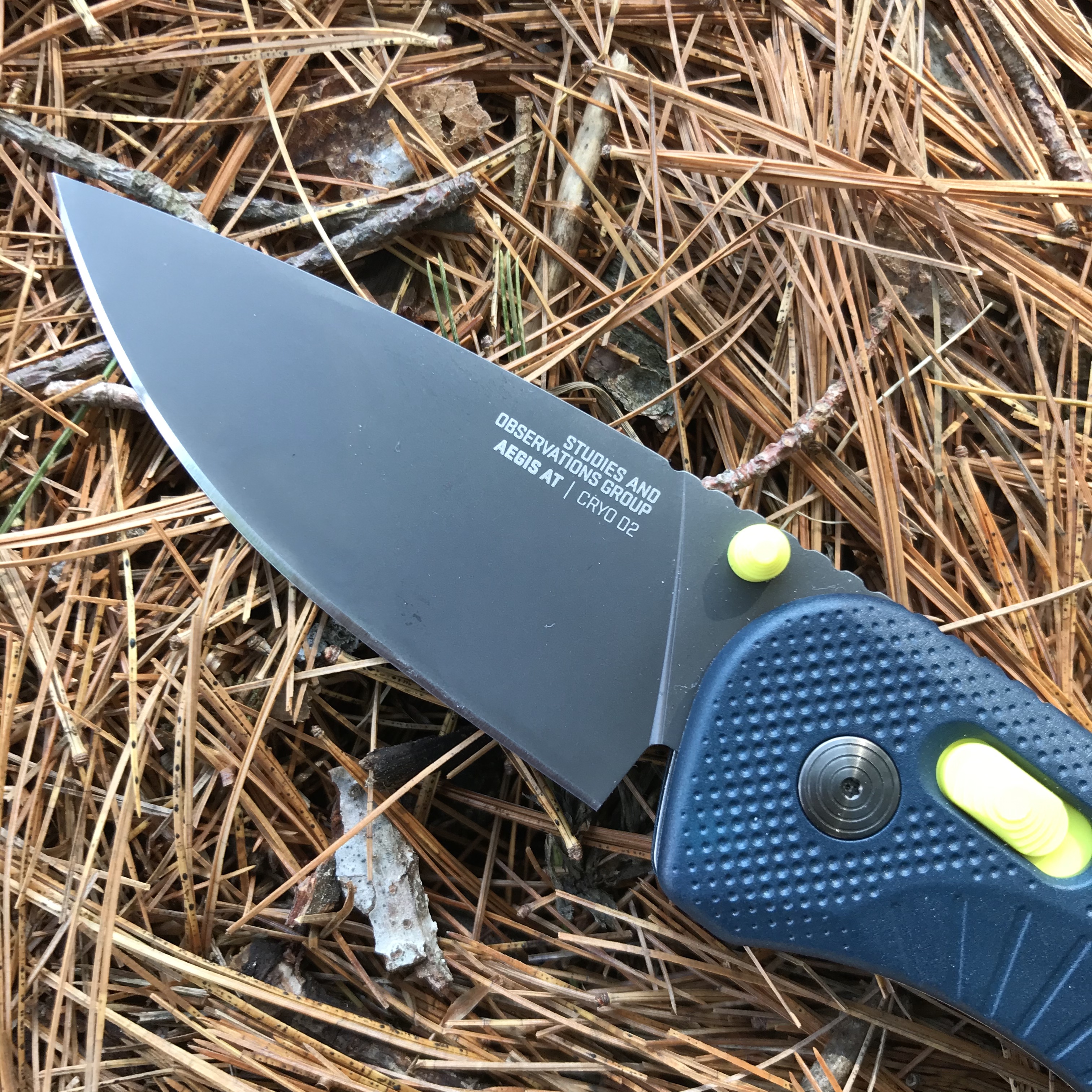 For most of us that use EDC knives, the assist is not necessary, and the assist lock is excessive. The knife also has a deep-carry, tip-up pocket clip. The clip is snug without being too tight. Only the screws near the bend in the clip cause issues, as they can hang up on extra-bulky material. Finally, the AT adds a massive, handle-extending lanyard loop.

Initially, the lanyard loop dismayed me, as it both threw off the great blade-to-handle ratio of the original and it made the knife carry like a much larger blade. But after prolonged use over a few days spent outdoors, I’ve come to like the in-hand feel of the Aegis AT, primarily because the lanyard loop also acts like a bird’s beak usually found on the pommel of a good fixed blade.

Aegis AT: A Great Work Knife, But Heavy for EDC

One major change is the use of nearly full steel liners. I don’t like this difference, as it makes the knife quite heavy.

If you need a knife to work, the Aegis AT is an excellent and inexpensive blade. The D2 will hold an edge well, and its coating will ward off corrosion. The handle is quite comfortable even with gloves, and the assist with help when a gloved hand deploys this knife.

As an EDC, the AT is not an upgrade to the original, as it’s heavier and longer. But a mini, lightweight version of this knife, shorn of the lanyard loop, would be competitive in the market. Additionally, the Terminus XR in S35VN is part of the new SOG line, and it’s among the best EDC knives available, especially if you limit yourself to knives under $100.

As it is, the Aegis AT, at a retail price of $85, would make an excellent duty knife or work knife. But it isn’t exactly ideal for EDC use because of its size and weight. It would also make for an excellent pack knife.

Up Next: Exclusive Sneak Peek: Leatherman FREE Gets First Splash of Color