Find wonder in daily training, stay cool under pressure, and get in the zone. Mindful Running offers insight into endurance sports.

“Optimize performance, boost happiness.” That may sound like a commercial for the next best sports drink or diet, but this claim comes from a mindful take on running.

Published Oct. 10, Mindful Running by Mackenzie Havey aims to illuminate how being in tune with one’s mind and body can increase running performance—and make the runner happier. 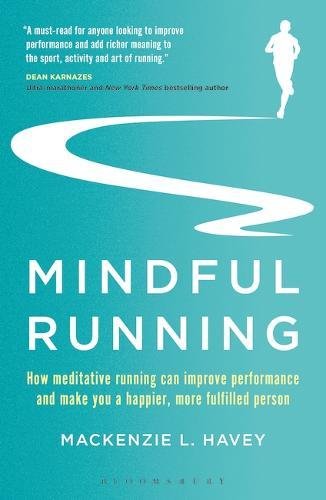 The book offers athlete interviews, medical insights, and a lens into the latest research about running. It not only explains how runners feel present but also explains why mindfulness leads to improved running.

How can you use this? Havey offered three tips to help you run better by remaining mindful.

Scan your environment, body, and mind as you start to run. Engage all five senses, and get a deep sense of how your body is feeling. Notice your thoughts and emotions as they come up. Tune in and notice what’s going on.

Gather information from step one and consider whether or not to take action. Pain, boredom, fatigue, and negative thinking are all common thoughts runners may experience. Being aware of these phenomena sets yourself up to respond productively.

Taking the right action may help runners notice important body signals like an impending injury or the sensation of overtraining.

“Mindfulness calls the runner to notice and embrace the physical sensations of discomfort,” said Havey. “Research suggests that when we aren’t tuned into the moment, we’re more likely to waste a bunch of energy mindlessly resisting the discomfort, which causes tension and additional angst.

“Accepting the discomfort, rather than catastrophizing it, allows a runner to relax into the run and not make a challenging situation harder.”

Enter into the coveted state of flow after bringing mindful awareness to the present. Some runners choose an anchor, like a foot strike or breath, to focus.

Flow, according to Havey, is where you feel and perform at your very best. With mindfulness training, studies show athletes can more readily enter flow.

Want to learn more? Read on for Chapter One of Mindful Running

“I focused on each step and every breath even if they were a little worn. I arrived at the point in the race that I live for, the simple moments when you’ve reached down to your core and all you can do is keep running. I dreamt of this happening for months, waiting for the heart to take over.”

THESE ARE THE words of Timothy Olson in his post-race account for the popular
ultrarunning website, iRunFar, after his record-setting first-place finish at the Western States Endurance Run in 2012. He shifted into this state around mile 80 when he left the rest of the competition behind. The oldest 100-mile trail run in the U.S., the historic course starts in Squaw Valley, California and runs west to Auburn, traversing the trans-Sierra portion of the Western States Trail, which stretches from Salt Lake City, Utah to Sacramento.

The footpath was long ago trodden by the Paiute and Washoe peoples and later, in the middle to late 1800s, by the enterprising gold rush prospectors as a connection between the bustling gold camps of California and the booming silver mines of Nevada. Each June, runners climb more than 18,000 feet (5,486 meters) and descend 23,000 feet (7,010 meters) on these rugged trails over mountain passes, river crossings, and remote wilderness. One of the most competitive 100-mile races on the planet, it’s no easy feat to even claim a spot at the prestigious start line.

As Olson navigated the final 20 miles of the course that late summer day in 2012, he experienced an intense focus and fluidity of movement, often referred to as “flow.” Despite the long day, his aching legs and weary mind, his body traveled almost mystically through space, navigating each step with precision as he moved closer to the finish line in Auburn. “I was possessed by the trail,” he wrote.

With just 7 miles to go, he stopped at an aid station and filled his hand-held bottle with Sierra Mist one last time and took off toward the finish in hopes of maintaining his lead. His physical pain was intense and he knew his muscles might seize up at any moment as he descended into the American River Canyon before arriving at the imposing No Hands Bridge. The structure looms 150 feet (45 meters) over the American River, which flows from the Sierra Nevada mountain range to its confluence with the Sacramento River.

As Olson pounded over the bridge that evening, he smiled to himself. “This is actually happening,” he thought. “I’m going to win Western States.” He navigated the final mile in an intense present-moment euphoria. The air buzzed with excitement. He felt out-of-body and electrified with awe and gratitude. The soft, late-day summer sun warmed him as it set in the mountains. Shirtless and sporting a healthy tan, Olson entered the Placer High School stadium and ran the final 300 meters on the track as he high-fived cheering fans standing on the in-field. His dirty and sweat-soaked blonde hair bounced at his shoulders as he strode across the finish line in a time of 14 hours, 46 minutes, and 44 seconds, more than 20 minutes faster than anyone had ever run the race in its 36-year history.

Olson was welcomed on the track by his wife, Krista. They embraced before he leaned over to kiss her belly, pregnant with their first child. This was not only a major breakthrough in the ultrarunner’s career, but also his life. Things hadn’t always been this luminous for Olson. His story is one that shows that sometimes we have to hit rock bottom before we make the choice to wake up, climb out of the canyon of despair, one step at a time, across the old bridge, and toward something better.

Growing up in North Central Wisconsin’s Tomorrow Valley, Olson logged many miles as a youngster through the corn and soybean fields near his home in the small village of Amherst. In high school, he joined the cross-country team to get in shape for basketball. He was a good runner, but after fleeing the nest for college, he stopped. Inertia took hold. A backward slide began. And he got lost.

Bad choices and destructive detours led Olson to drop out of college and spiral down the path of drugs and alcohol. He gained weight, got depressed, and eventually ended up in jail with a drug conviction. Hard-core drugs made life feel like it wasn’t worth living, but he also worried he couldn’t live without the chemicals.

He returned to running in 2006, when he was on probation for the drug conviction, in an attempt to detox his body and mind. On his road to sobriety, the opportunity to coach cross-country and track at his old high school in Wisconsin arose. This was a turning point for him. He rediscovered a joy of the sport through the eyes of the kids he coached. Soon he found himself running down the same rural backroads he once drove getting high and blaring loud music. His lungs burned and his legs resisted, but somehow it didn’t hurt as bad as the lowest moments of his former life.

He went back to college, met his future wife, and kept on running. After he graduated, the couple headed west to Ashland, Oregon, a community of about 20,000 in the foothills of the scenic Siskiyou and Cascade ranges just north of the California border. He took to the natural beauty of the trails and eventually fell in with a new kind of crowd. Instead of drug dealers and addicts, he found kinship with a tribe of accomplished trail runners who lived and trained in the area.