Toyota’s RAV4 isn’t known for its off-road prowess. So will putting a TRD Off-Road badge on the little crossover for 2020 make it any more off-road capable?

Typically, those who seek rugged, off-road adventure look to iconic Toyota 4×4 vehicles like the Land Cruiser, 4Runner, and Tacoma. But the Japanese automaker recently announced it would bestow its coveted Toyota Racing Development (TRD) Off-Road badge on the 2020 RAV4.

Does this mean Toyota gifted the stout little SUV all-terrain chops like its 4×4 siblings? The short answer is no, the 2020 RAV4 TRD Off-Road isn’t any more capable than other current RAV4 models. But it will offer better-tuned off-road suspension and more aggressive off-road-capable tires from the factory. 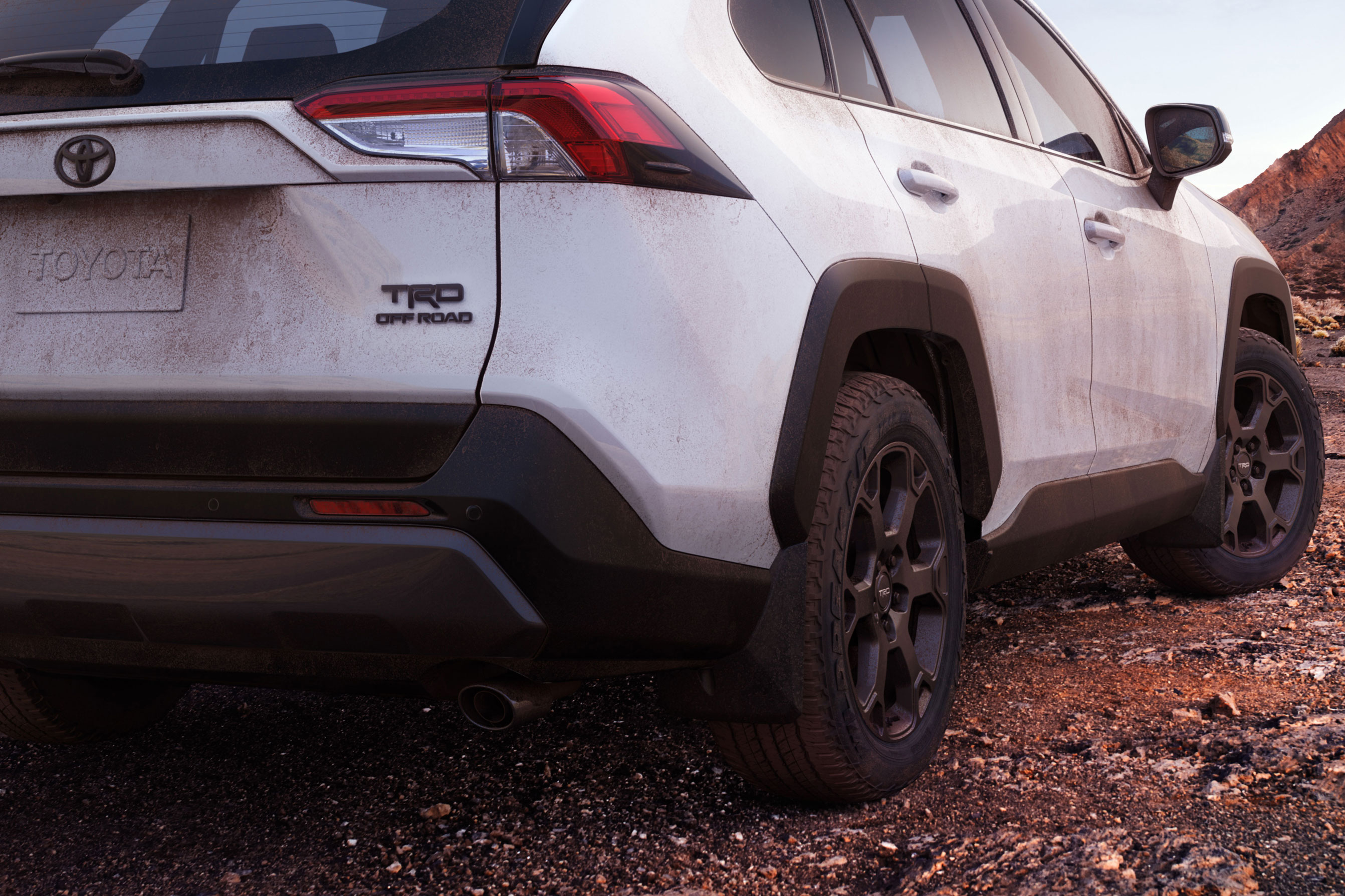 The best way to view the 2020 RAV4 TRD Off-Road is as a more aggressive-looking, highly optioned crossover SUV with upgraded suspension and versatile tires. It debuted at the Chicago Auto Show this week. No word on pricing or release date yet, but we’re sure to see it on dealer lots before the end of the year.

Crossovers and trucks currently rule the U.S. automotive market. And the Toyota RAV4 has been the best-selling non-pickup truck among Americans for a few years now. Toyota is hoping that its legendary TRD Off-Road badge will help attract even more adventure buyers. 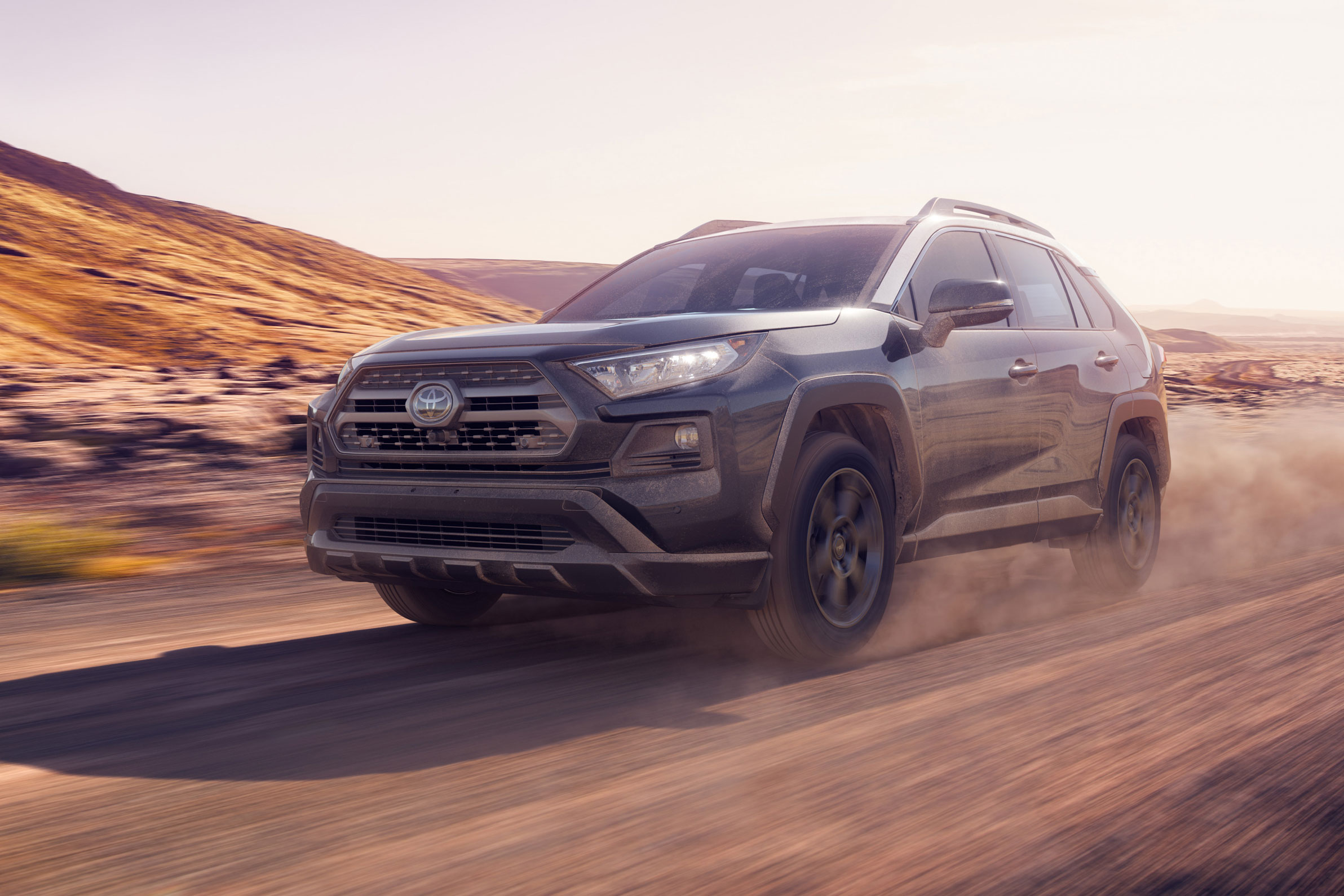 And Toyota said as much in its own press release, announcing the 2020 RAV4:

So let’s look a little closer at that claim.

Toyota fully redesigned the RAV4 in 2019. The new platform offers more interior room and really good entry and departure angles. But there’s a disadvantage to this type of longer wheelbase architecture: reduced breakover angle. Basically, you can expect this RAV4 to drag its belly over off-road obstacles more than previous generations.

The 2020 RAV4 TRD Off-Road has the same 8.6-inch ground clearance as the current RAV4 Adventure. But the big news with the new TRD Off-Road is its “suspension inspired by rally RAV4 race team.” 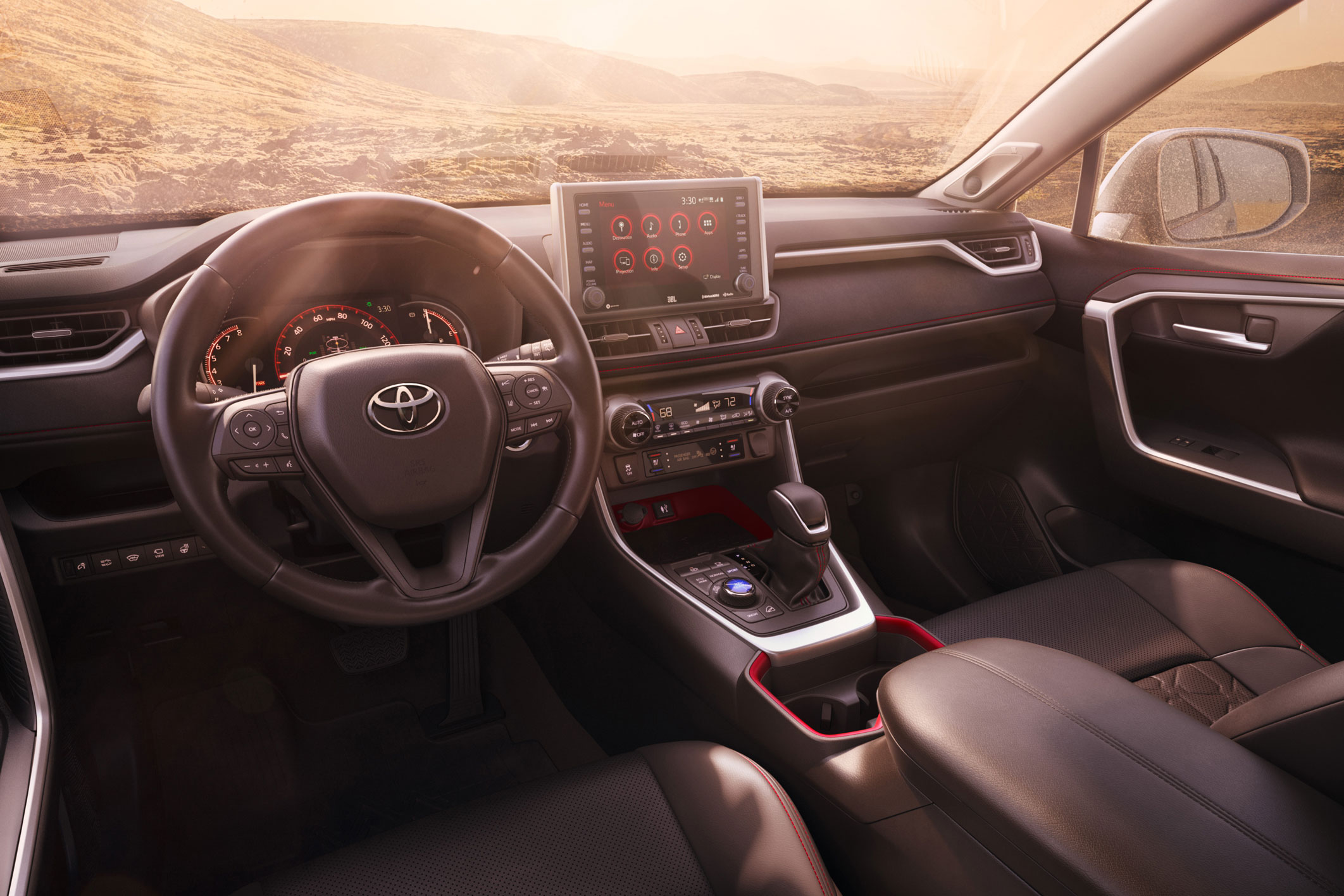 That refers to new red coil springs and twin-tube shocks tuned specifically with an off-road focus. New bump stops should also improve vehicle handling when going over large obstacles at speed. While the new suspension offers no increased ground clearance or wheel travel, it should provide a smoother ride when the trail gets rough.

One key advantage the RAV4 has over many of its all-wheel-drive crossover competitors is Toyota’s Dynamic Torque Vectoring All-Wheel Drive system. This system comes standard on the 2020 RAV4 TRD Off-Road and allows for a 50/50 front-to-back power split when needed.

Toyota also packed the RAV4 with technology, even into its off-road capabilities. The TRD Off-Road model will come standard with Toyota’s Multi-Terrain Select system. This system allows the rider to optimize the vehicle’s traction control, throttle response, and brakes according to the conditions. It also offers driver-selectable Mud and Sand, Rock and Dirt, and Snow modes. This helps maximize traction in all conditions. 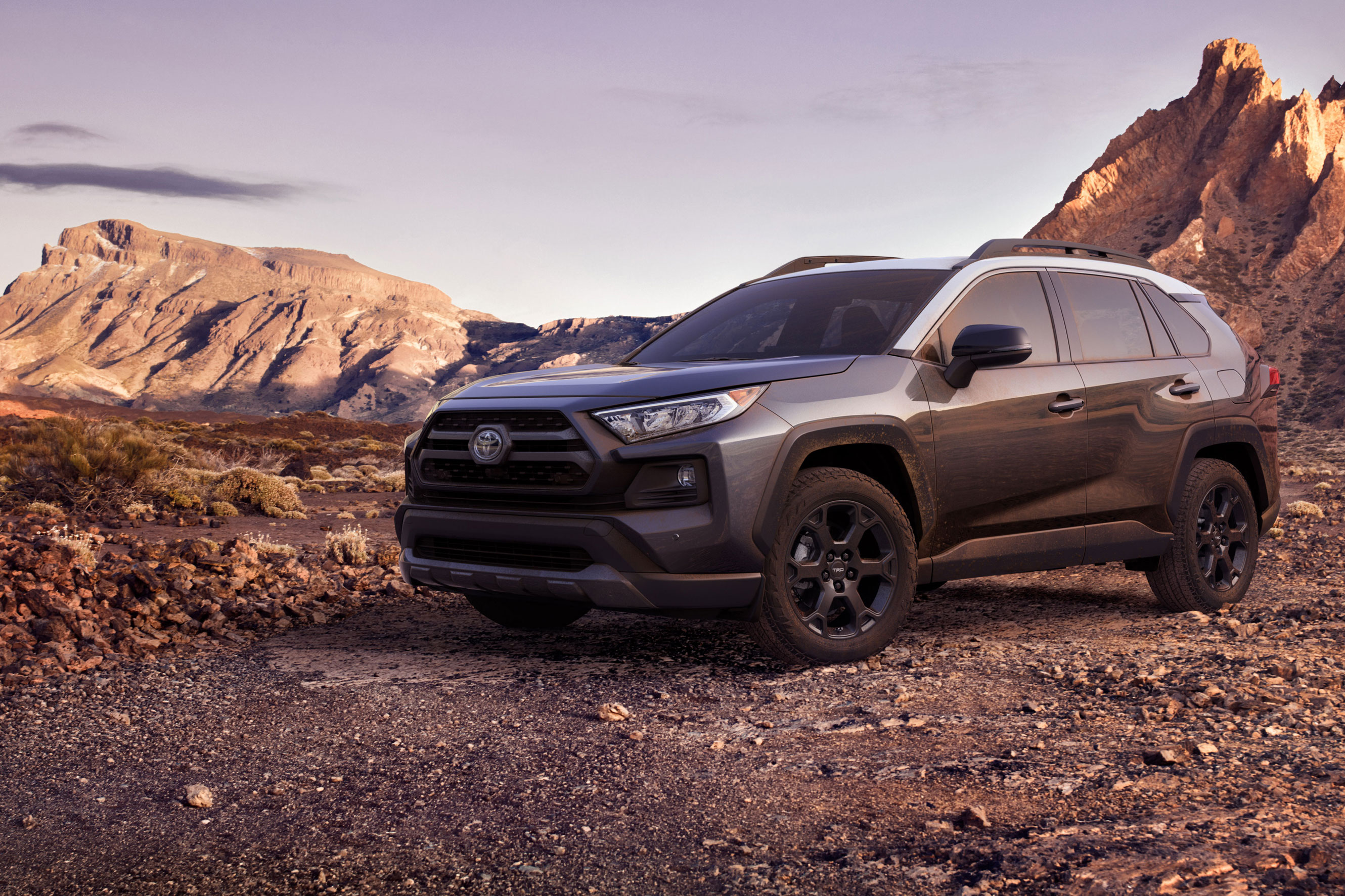 Toyota also gave the RAV4 a full redesign in 2019, with a few style cues inspired by the rugged Tacoma. The RAV4 TRD Off-Road builds on those elements and those found on the RAV4 Adventure.

Like the Adventure, the new TRD Off-Road has raised roof rails, bigger fenders, and more aggressive bumpers. Its grille and fog light surrounds are even the same shape. But the TRD model will offer a different grille insert that looks to be very much inspired by the Tacoma. 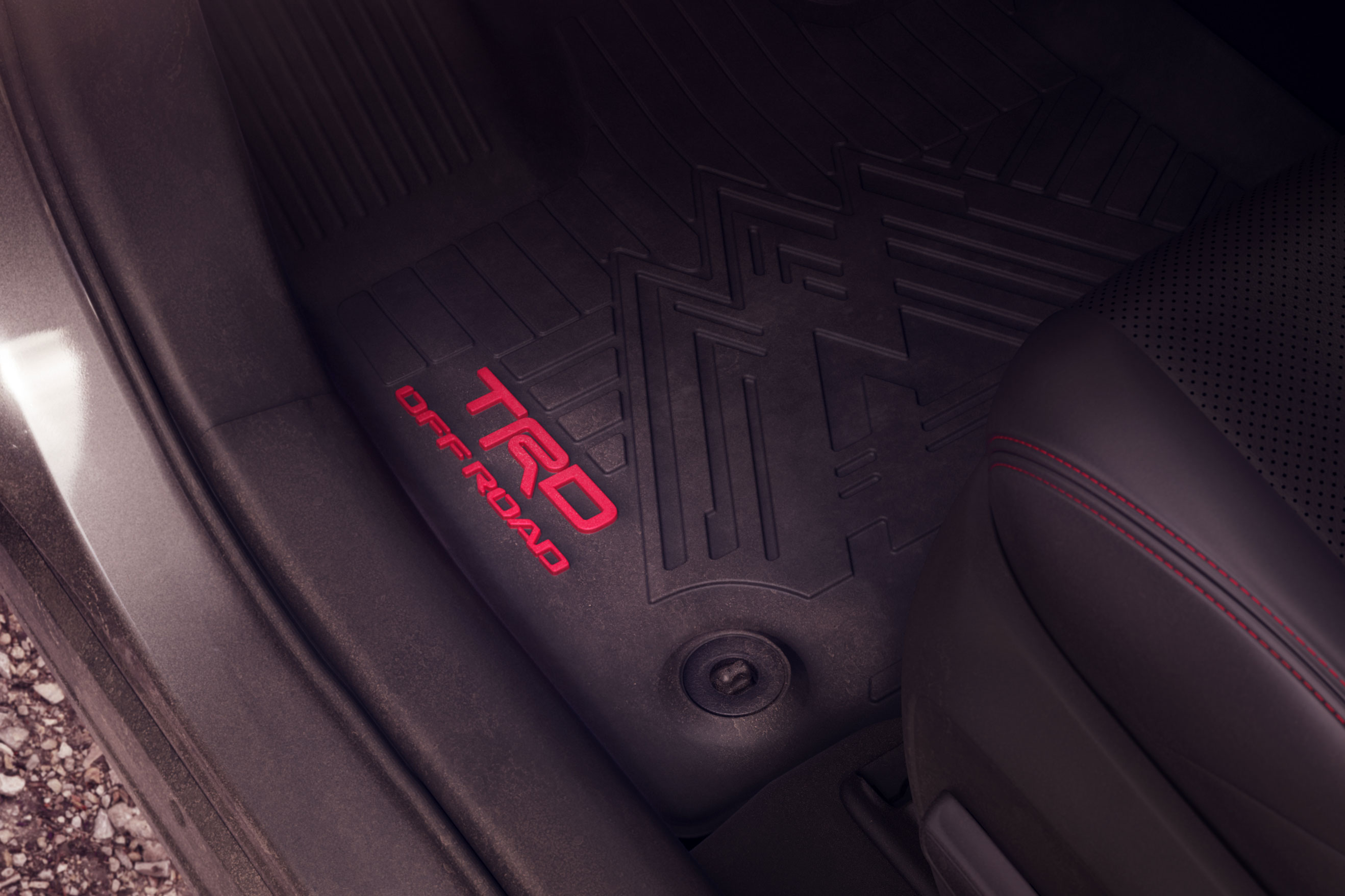 Honestly, I’m most impressed with the clean angular interior design. It’s hard to go wrong with red accents on black, and Toyota has tied it all together nicely. The seats are covered in a SofTex material that Toyota claims to be “lighter than leather yet highly durable.” And the TRD logos on the headrests and floor mats are nice touches as well. 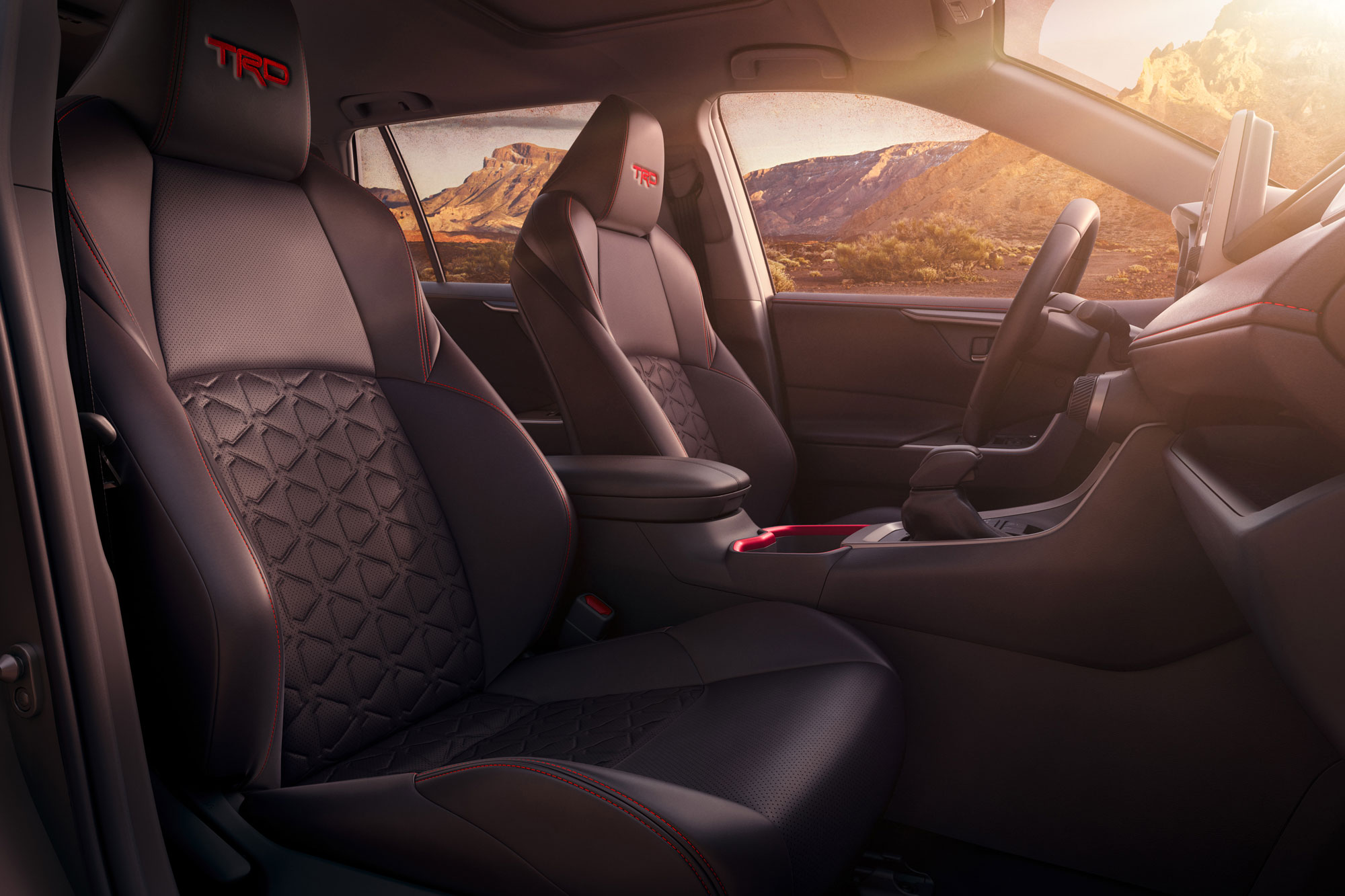 As for the outside, you will be able to purchase the new RAV4 TRD Off-Road in Ruby Flare Pearl, Super White, Midnight Black, and Lunar Rock. The darker colors will be available with the optional Ice Edge Roof two-tone look and all will come with dark-gray front and rear lower fascias. The winner, in my opinion, is the TRD Off-Road exclusive two-toe Magnetic Gray Metallic w/Ice Edge Roof combination.

The RAV4 has gone through five generations and been on the market for 22 years now. Toyota wants to make sure it stays at the top of the segment it helped pioneer — the small crossover SUV. It plans to do this by offering the latest safety and performance technologies available today. This will appeal to both families and young professional buyers.

From 2019 onward, the RAV4 will come standard with Toyota Safety Sense 2.0. The system has a wide range of the latest safety tech on the market. This provides safety features like pedestrian detection, dynamic cruise control, lane departure alert, Lane Tracing Assist, and more.

So while the RAV4 may not be the same off-road behemoth as its TRD Off-Road brethren, it should make for a decent adventure companion, packed with the latest tech everyday drivers expect.