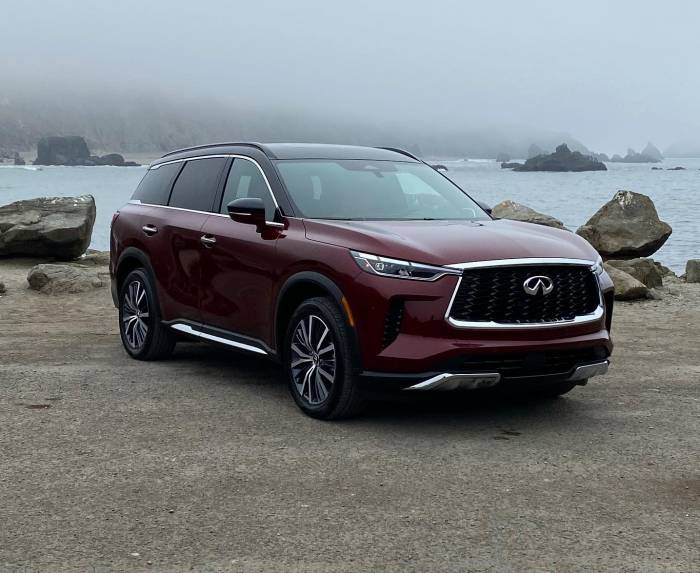 Thanks to a facelift and an all-new interior, the QX60 gets top marks in the luxury SUV class.

Infiniti’s first three-row SUV, the QX60, was originally designed by Naoyuki Ohkoshi under Shiro Nakamura more than a decade ago. First released as the JX, it became the QX60 in 2013.

It’s been a cornerstone seller in the luxury SUV market for the brand, with 30% of total Infiniti vehicle sales ever since. The latest 2022 Infiniti QX60 gets a number of updates and remains a contender in its class.

Infiniti’s marketing team has created a persona for the QX60, and it’s squarely aimed at professional parents. Infiniti built an intricate profile for its target buyer: parents who work outside of the home, value experiences and luxury, are multitasker go-getters, and revel in the busy life.

Though the QX60 has enjoyed a reasonably firm market presence to date, it was time for the SUV to get a full workover. For the model year 2022, this family hauler gets a number of improvements from the first generation including cosmetic, mechanical, and tech upgrades.

Infiniti pulled out all the stops, and the resulting 2022 Infiniti QX60 has a lot to offer.

The 2022 Infiniti QX60 has a new transmission, upgraded suspension and steering, and direct coupling all-wheel drive that engaged almost instantly. Infiniti said, “See ya!” to its not-as-popular CVT, which corresponds to the changes Nissan made to its kissing cousin, the Pathfinder.

Both the QX60 and Infiniti share a 3.5L V6 that makes 295 horsepower paired with a nine-speed automatic. At Infiniti’s proving grounds in Arizona, the testing showed this setup matched the body quite well.

Driving the QX60 was comfortable and felt intuitive. The SUV took turns smoothly, accelerating out of the curves with a planted stance.

It’s less so on twisty roads, and Infiniti told me that’s about right because it’s more likely to achieve an uninterrupted, no-brainer drive on straightaways.

In this segment, the QX60 is squarely aimed at same-size vehicles like the Lincoln Aviator and BMW X5, each of which has proven to be fierce rivals. The BMW X5 has the advantage of the availability of a hybrid version that is butter smooth. And the Aviator cranks up the horsepower to nearly 500 with a twin-turbocharged engine. Each SUV has its own set of charms and loyal buyers.

And that’s where Infiniti has an opportunity. The brand has pulled out all the stops to get this seven-seater up to speed with its competition. And they have figured out where to spend their time and energy by targeting family-friendly features. Clever storage cubbies, tri-zone climate control, and six standard USB ports were just a few of the interior highlights.

The brand didn’t skimp on standard amenities on the QX60. This is a luxury SUV, after all. Every QX60 comes standard with a 12.3-inch touchscreen, wireless Apple CarPlay and USB-based Android Auto, and a multi-mode second-row seat with a one-touch release for easy entry and exit.

Upgrading to the Luxe variant exchanges the standard 18-inch wheels for 20-inch wheels and adds ProPilot Assist, which includes a number of driver-assist features. The Luxe version also features roof rails, heated/cooled front seats, and a dynamite around-view camera. This is the trim group that Jeff Pope, the vice president of Infiniti Americas, believes will be the hottest seller in the lineup.

Next up is the Sensory trim, which adds massagers to the front seats — they work well, I discovered. It also comes with the upscale 17-speaker Bose Performance Series audio system, which is a $900 option on the Luxe model.

In my opinion, the Bose system lacked some richness I would expect, but the quietness of the cabin helped. The Sensory package also includes an air purifier and some other nice-to-have amenities.

The top trim for the 2022 Infiniti QX60 is the Autograph, which along with the Luxe is a new option. This is where the QX60 really shines as a luxury SUV with tip-to-toe leather and captain’s chairs (which aren’t available on any other trim level).

The center console between the second-row chairs can be removed to offer a minivan-like interior with room for passengers to move between rows. Don’t expect there to be a ton of room in the third row, because it’s definitely tight; save that for your elementary-school-age and younger kids.

With an uprated cooling and an installed hitch receiver, a QX60 Autograph can tow up to 6,000 pounds. That’s a decent tow rating for an SUV of this size. This means you can bring a mid-size camper or boat with you on your travels.

To recap, there are some things that Infiniti does spectacularly well.

First, sharing the Zero Gravity seats found in Nissan vehicles is smart. In my opinion, these seats are among the best in the industry for comfort. The smart design really does make a difference when you’re driving long distances.

After spending a fair amount of time in a Nissan Rogue this summer on a 1,300-mile road trip and experiencing zero pain in my neck and back, I’m a big fan.

Second, the cabin is noticeably quieter than other SUVs of its size. The changes Infiniti made to this effect give the QX60 serenity approaching a Buick product. Buick prides itself on its quiet cabins, and the 2022 Infiniti QX60 gives it a run for its money.

Lastly, the mechanical updates are impressive. The switch to shift-by-wire frees up space inside, the new transmission feels seamless, and the available tow package elevates the QX60 in a way that gives it more chops across varied terrain.

There are a few minor annoyances, but nothing that would keep me from buying it if I were shopping for a seven-seat SUV. Come to think of it, the only thing that I didn’t love was the lane-keeping assist function included in ProPilot Assist, which felt aggressive to me. I feel the same way in Nissan vehicles, which makes sense.

For a base FWD Pure QX60, you can expect to pay $47,875 (including destination charges). All the way at the top of the line with the quilted leather and interior and all of the niceties that come with that, you’re looking at $61,375 for the Autograph trim.

Want to add all-wheel drive? That’s an additional $2,000 at all levels except for the Autograph, which tacks on another $1,000.

Look for the 2022 Infiniti QX60 to arrive at dealerships this fall. It’s a vast improvement over the last generation, and if you’re in the market for a luxury seven-seat SUV, this one is worth a look. 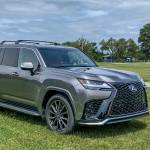