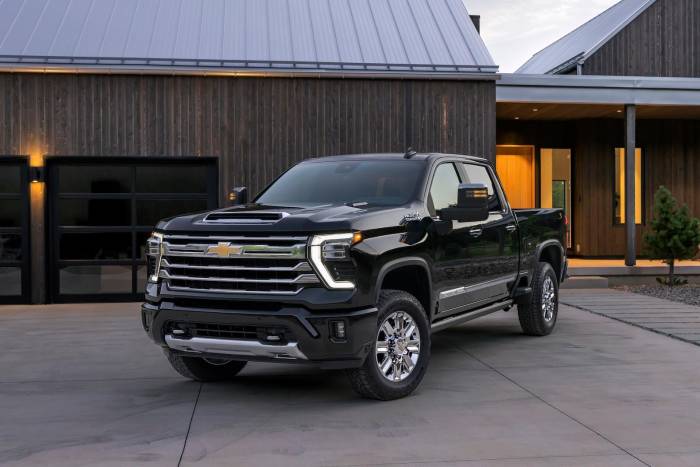 In the escalating battle for supremacy in the heavy-duty market, Chevrolet is the latest to fire a shot.

The bowtie brand plans to launch an updated version of the Silverado HD next year and offered up a sneak peek barely a day before archrival Ford is set to unveil its own updated Super Duty lineup. While not as extensive a makeover, Chevy’s 2024 update offers many new features, a beefed-up diesel option, and an all-new heavy-duty version of the off-road-oriented ZR2.

For those who think bigger is better, Chevy’s got a truck for you. And it’s making some significant mid-cycle updates to the Silverado HD for 2024. Set to reach the market sometime during the first half of 2023, the pickup gets some modest exterior tweaks, a more dramatic interior makeover, and plenty of new high-tech features.

The 2024 Chevrolet Silverado HD also gets a substantial boost in power from its 6.6L turbo-diesel. And there are two new variants, the High Country Midnight Edition targeting those who want a mix of luxury and brawn, and the ZR2 which is aimed at buyers who want the maximum muscle available while off-roading.

“We’ve designed the Silverado HD to be our customers’ favored choice for true truck capability,” said Scott Bell, vice president of Chevrolet. “The enhancements to the 2024 model build on its core strengths to provide an even stronger balance of the design, strength, and confidence that makes tackling the hard jobs, including trailering, easier and more convenient than ever.”

Chevy pulled the wraps off the new truck during a media background briefing Monday morning, revealing what might, at first, be dismissed as a modest warm-over. From an exterior perspective, there aren’t many changes beyond a revised grille, modified C-shaped LED running lights, and updates to the front fascia meant to give the truck a bolder presence.

Step inside, however, and it’s another matter entirely. Except for the base Work Truck and Custom models, all other versions of the Silverado HD boast an entirely new cabin layout with a 12.3-inch gauge cluster and 13.4-inch infotainment display — both standard. There’s also a new wireless smartphone charger, leather-wrapped surfaces, and other enhancements.

Muscling Up the Powertrain Options

But what really matters with a heavy-duty pickup is its muscle. And the big news for 2024 will be the introduction of an upgraded Duramax 6.6L turbodiesel that now pushes out a whopping 470 horsepower and 975 pound-feet of torque. That package can handle up to 36,000 pounds of trailer.

Chevy claims its “engineers enhanced low-end torque production by up to 25% for improved performance at low speeds or climbing grades, and particularly when trailering.”

The standard powertrain features a 6.6L gasoline engine making 401 horsepower and 464 pound-feet of torque. The gross combined weight rating jumps from 24,000 to 26,000 pounds.

Both engines are paired with a 10-speed Allison automatic gearbox. Four-wheel drive is available as an option.

As has become the norm on full-size pickups, in general, the new Silverado HD adds a variety of high-tech upgrades. That goes well beyond the larger infotainment screen and includes 14 different camera views. There also are four new features aimed at making towing easier to manage:

Chevy officials boasted during the web event that the HD model has this year surpassed its top rival, Ford’s Super Duty to become the best-selling heavy-duty pickup in the retail segment. Factoring in commercial and fleet models, however, Ford still retains the overall sales crown for the heavy-duty segment.

Chevy does offer a range of configurations, including Regular, Double, and Crew Cabs. And it has a wide range of trims.

Among the other news for 2024, Chevy is adding two new trims, starting with the High Country Midnight Edition. It’s a monochrome take on what is already the most lavishly appointed version of the Silverado HD.

Then there’s the ZR2. This off-road package is already a popular option with Silverado 1500 customers and now makes its debut in the HD family. The ZR2 will be a late arrival for the 2024 model year and Chevy didn’t reveal specific details. But in the Silverado 1500, it covers a lot of critical bases with upgrades to the suspension system, additional underbody protection, and other upgrades critical for serious off-road adventures.

The 2024 Chevrolet Silverado HD will make its public debut at the Texas State Fair on Sept. 29. But it won’t roll into showrooms until sometime during the first half of 2023, officials said during Monday’s background briefing. Ongoing shortages of semiconductor chips could impact the precise timing, they acknowledged.

Meanwhile, pricing and fuel economy numbers aren’t expected to be released until closer to the on-sale date. Stay tuned.