Home » Motors » ATV » This Should Be a Bond Getaway Vehicle: Shadow Six Typhoon

A UTV body mounted to a pair of custom jet ski hulls means a seriously cool rig for the water. One with two 1800cc supercharged Yamaha engines.

Can’t decide if you want a side-by-side or a jet ski? Shadow Six Racing solves that problem by taking a UTV and mounting it to a pair of jet drive hulls. They’re calling it the first-ever Aquatic Utility Vehicle. We’re calling the Shadow Six Typhoon awesome and just this side of crazy.

We’re not even exaggerating. Call it Peak Florida, but it looks like someone has taken a Polaris RZR and swapped out the tires for a pair of jet ski hulls.

Because they have. It’s more than that, of course. So much more. 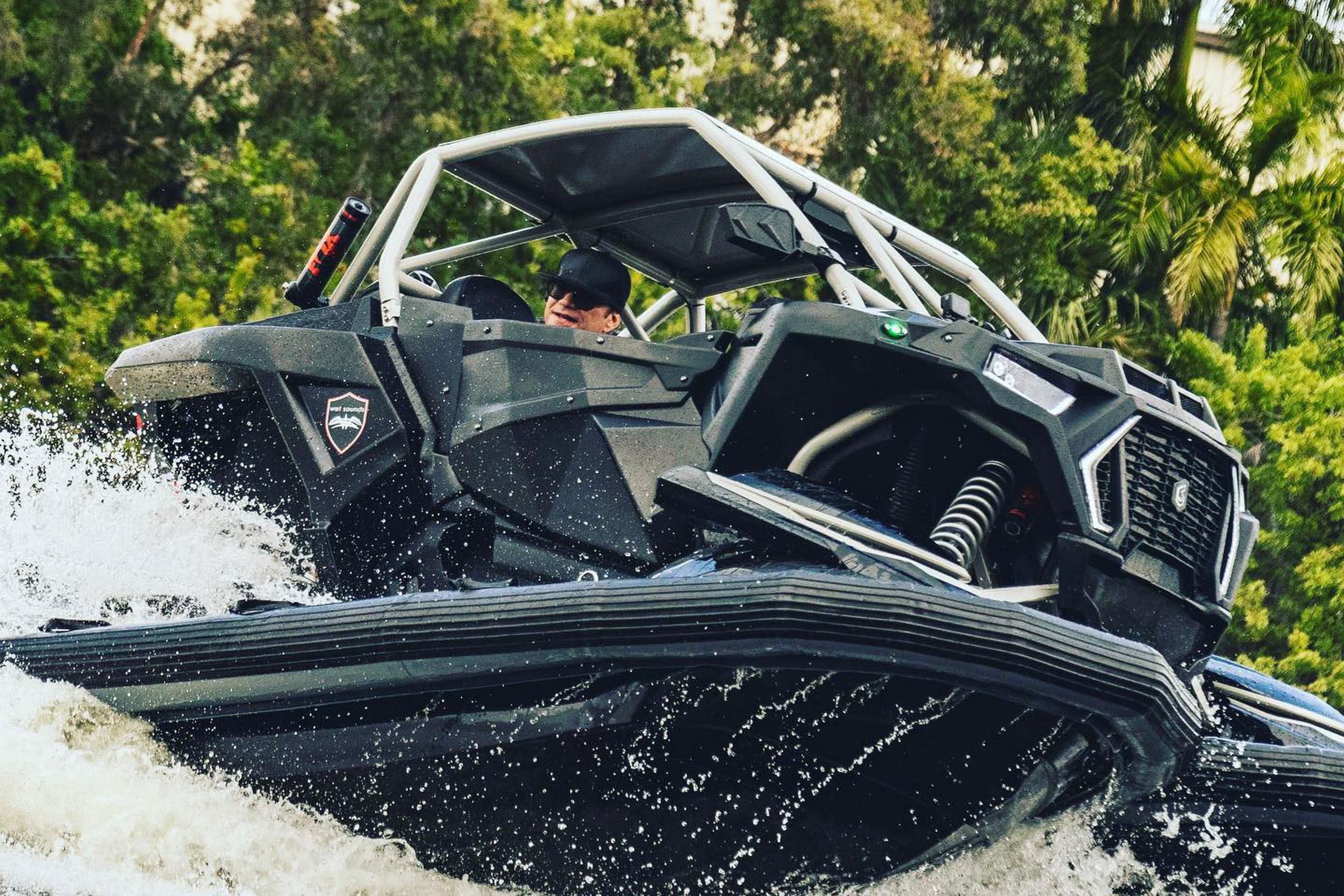 It’s only the body panels that are from a RZR, Shadow Six says. Actually aftermarket RZR widebody panels. The frame is custom-fabricated and made from titanium, for corrosion resistance and lightweight. It still has suspension, though, so those twin hulls are mounted to a shock and spring assembly at each corner.

That means you’ve got a suspension system on the water to help damp the blow of the waves. Or to introduce a whole new dimension of sea sickness, depending on how you feel on the water. 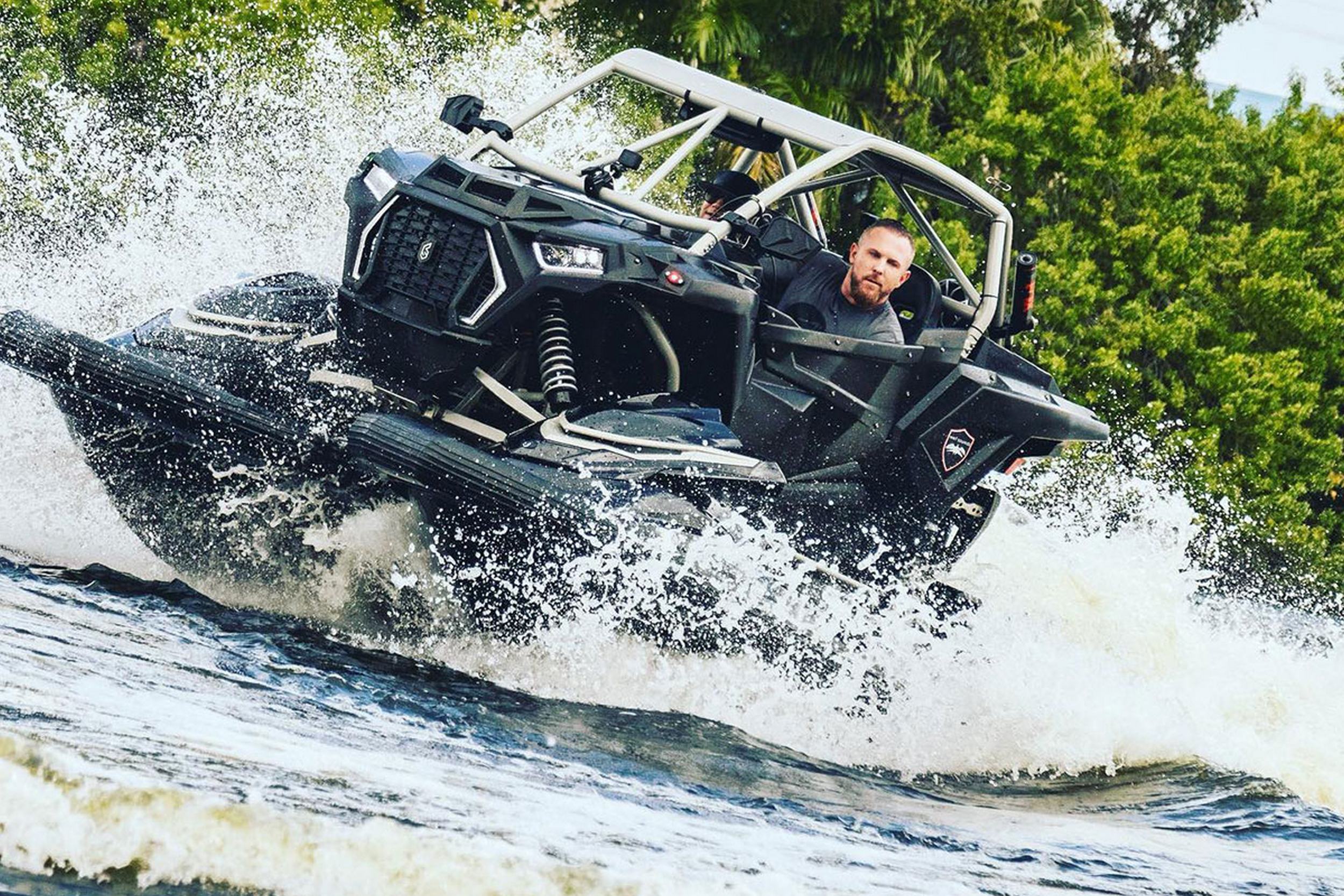 This is a quarter-million-dollar machine, so it’s not powered by some boring engine. It’s powered by a pair of Yamaha GP1800 R SVHO engines, one in each of the hulls.

These 1.8L supercharged four-cylinder engines each make 250 horsepower, at least from the Yamaha factory. Shadow six says it offers packages that tweak the Typhoon’s engines to make even more power than that — enough power to hit more than 80 miles per hour on the water.

How does this high-mounted UTV chassis stay upright in corners? By automatically adjusting the trim of the hulls using its Cornering Control system. Shadow Six adds that only around 300 pounds of its 2,300-pound dry weight are above the waterline, greatly improving stability. Inflatable collars at the waterline help it to better handle rough water.

The company’s videos only show it operating on smooth water, but company owner Ryan Goldberg says they’ve tested it out in many different surf conditions and in ocean water off the Florida coast.

For now, it’s a two-seater. The company does plan on building a four-seat model with a back seat, giving it more room, but that would mean a new model with a new and longer chassis.

Production models are expected to arrive in Q1 or Q2 of next year. That’s dependent on Shadow Six’s ability to get Yamaha PWCs to disassemble (for the engines and drive gear). Working with Riva Motorsports, which calls itself the largest PWC dealer in the world, should help maintain the supply.

The goal is to build 30 in 2023, limited, again, by supply the company says, and not demand. With pricing starting around $250,000, Shadow Six says there are plenty of people waiting.

And no, it can’t go on land. Even if you could refit the wheels and tires, there is no motor mounted up top, and no way to fit it in the custom chassis.

We’re not sure who was asking for a jet ski with a UTV mounted to its back, but, well, it looks both awesome and horrifying. The best fun toys are equal amounts of both, and we bet this would look great on a trailer behind your Ford Raptor or RAM TRX.

Next up for the Shadow Six Typhoon is a trip to the SEMA Show later this year in Las Vegas.

If you already own everything and need an excuse to spend $40,000, you can ride your ATV into a lake. Read more…