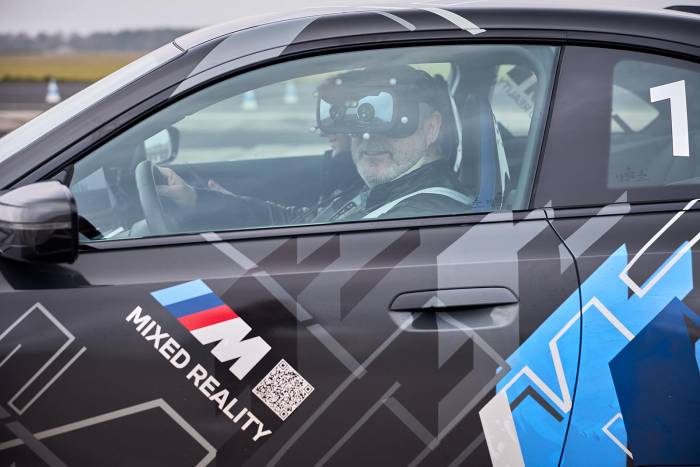 To listen to some prognosticators, this is the era of the ‘metaverse.’ Strap on a pair of virtual reality goggles and you’re transported to an entirely different universe. But what if you have one foot in the metaverse and another in the real world? Here’s what happened when we checked out the new M Mixed Reality system from BMW and Epic Games.

A gate drops down in front of me, forcing me to yank the steering wheel to my left, my tires squealing as I struggle to keep the car under control. But, in the process, I clip a couple of coins floating above the roadway, giving myself a few seconds of bonus time.

Ever since I got my first Atari — yes, I am that old — I’ve “driven” plenty of automotive video games. But there’s something wildly different about the BMW M Mixed Reality system I checked out during a recent visit to Munich.

Developed in a partnership between BMW and Epic Games, it uses a virtual reality headset to transport you out onto an artificial racetrack. It’s like stepping inside a video game such as Forza. But there’s one major difference. I may be wearing a VR headset and looking at an artificial world, but I’m actually driving a very real, 458-horsepower BMW M2 sports coupe on the automaker’s M performance training course in the suburb of Maisach.

My drive begins as I climb behind the wheel of the M2 and buckle up a four-point harness. As I get settled, BMW engineer Alex Kuttner plunks a VR headset onto my noggin and tightens it up enough to keep it from jouncing around once we start driving.

Initially, it presents a video view of the real world, complete with the fog and drizzle that have rolled off of the Bavarian Alps. But after I complete a series of eye and head movements to sync up with the Mixed Reality system, that world suddenly vanishes. I’ve been transported to an elevated track that, as best I can imagine, rises above Tokyo by night.

The view is far from unpleasant, and what’s particularly notable is the lack of latency. That lag time between what you see and what your body physically experiences can be quite unsettling with many VR headsets and has left many experiencing nausea and disorientation. Here, the visual images are compelling and detailed, and sync up with my eye and head movements.

After giving me a few moments to get comfortable with my new world, Kuttner has me fire up the M2 and shift into gear. The coupe’s TwinPower inline-six emits a compelling roar as I tap the throttle and roll forward into a box grid.

I wait until the dragstrip-style “Christmas tree” goes green and the gate vanishes. Then, a female voice tells me to “go” and I launch onto the track.

One Foot in the Metaverse, the Other in the Real World

My first inclination is to slam the throttle and do a burnout. But Kuttner wisely suggests I take my time on the virtual figure-eight course to get a sense of how to handle a very real high-performance sports coupe while navigating a track that exists only in software.

As I work my way around the course I begin speeding up. But there are some surprises waiting for me. Virtual gates unexpectedly drop ahead of me, forcing me to steer around them.

At the same time, I chase coins that, I quickly realize, are floating versions of the BMW roundel or, if you prefer, the spinner logo. Each one gives me a few seconds of bonus time, helping me boost my final score.

As I enter the second lap, my right foot is ready for action. I slap the throttle hard and get a pleasing sensation of power as I sink deep into the M2’s seat. But this virtual course, which actually traces along the BMW M Performance Center tarmac, still requires skill to maneuver.

Approaching a corner hot, I yank the wheel to my left and feel the back end of the M2 start to lose traction. I begin to feel beads of sweat under the VR headset as I struggle to bring the coupe back under control, just missing a guardrail.

I finally start to feel the virtual and real worlds come together just as Kuttner tells me it’s time to pull over.

Back to What Passes for Reality

As my copilot turns off the simulator and helps me lift off the goggles, I’m returned to the reality of a gray Munich winter afternoon. I have to admit I’d have stuck around a lot longer in the virtual world if given the chance.

And I expect that others might have the same experience when checking out the BMW M Mixed Reality system.

Unfortunately, neither BMW nor Epic have plans to offer the system commercially. That’s probably a good thing. I can’t imagine letting drivers loose on the freeway, dodging virtual gates, and chasing floating coins.

Unlike a video game, there’d be real consequences. You wouldn’t be able to just hit the reset button after hitting a wall or another vehicle.

But the system wasn’t designed just to show off what you could do with a VR headset. BMW plans to use the technology to help train its race team.

With a few taps on the keyboard, drivers can be transported to any track in the real world — as well as completely artificial ones. The system also allows the track to be populated with other racecars to enhance the simulation.

There are some reasonably good mechanical simulators available today, though they’re plenty expensive. They’re used to train drivers in Formula One and other race series. But they can only go so far in making you feel like you’re actually on track.

If my own experience is any indication, the M Mixed Reality technology will be great for race drivers. It will help them feel like they’re driving courses as diverse as the Nurburgring or Road America.

And there could be other applications in the future. Perhaps for helping train mechanics and line workers, or allowing designers and engineers to virtually create new vehicles.

I’m just hoping I’ll get another chance to experience driving a sports car like the M2 in a mixed-reality world. 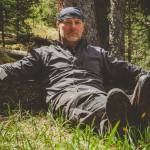 A new VR survival simulator from Les Stroud and Cream Digital will draw people straight into an episode of 'Survivorman,' teaching them the skills they need to survive in the wilderness. Read more…