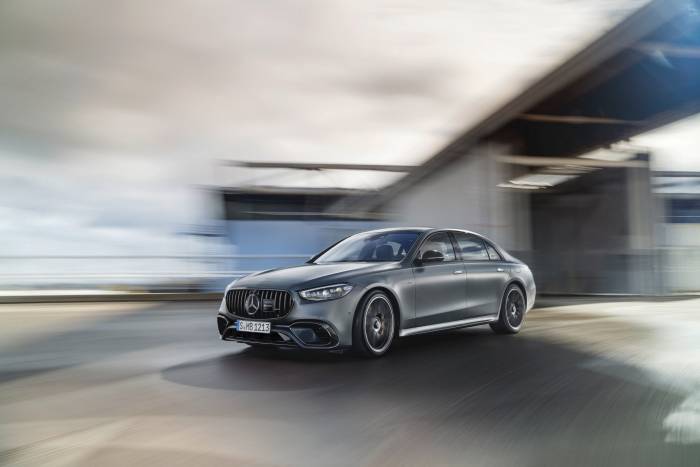 The AMG S-Class history stretches out more than 50 years. But we’ve never seen anything quite like this plug-in hybrid beast before.

One of the biggest fast sedans on the market is about to get electrified. The 2023 Mercedes-AMG S 63 E Performance shoves an electric motor into the mix with its 4.0L twin-turbo V8 to create a luxury machine that delivers just shy of 800 horsepower.

Since then, there have been plenty of hot versions of the Mercedes-Benz flagship S-Class sedan. The highlight was the 621-horsepower twin-turbo V12 S 65 offered in the previous generation of the car — or at least it was the highlight until today.

This AMG Benz starts with the 4.0L twin-turbo V8 instead of a V12, but the engine is no slouch. The hand-built AMG engine makes 603 horsepower and 664 pound-feet of torque — almost enough for the gas engine to eclipse the V12 on its own. But AMG wasn’t done yet.

A 188-horsepower electric motor is mounted to the rear axle, integrated with a two-speed transmission and a limited-slip differential. Mercedes cites several benefits to the unusual layout, all of which serve to benefit performance.

Because the motor’s torque is added after the transmission does its multiplication, Mercedes doesn’t need to worry about gearbox durability. This allows full torque from the electric motor over the entire RPM range of the gas engine. That total, by the way, is massive: 791 horsepower and 1,055 pound-feet of torque between the two systems.

Putting the motor on the rear axle gives the car a more agile response to the throttle, Mercedes-AMG says. Especially from a stop, where the full torque of the electric motor can be delivered immediately.

Even though the motor is mounted after the gearbox, AMG is able to send the electric motor’s power to the front wheels if the rears slip. The same system that lets that happen also enables all-wheel drive when the vehicle is running solely on electric power.

AMG uses what it calls the AMG High Performance Battery to store energy for the system. It says that the battery was developed alongside the Mercedes-AMG Petronas F1 team’s hybrid race cars and is inspired by some of the same technologies. In practical terms, AMG says the HPB offers low weight and the ability to extract maximum power multiple times and in rapid succession.

The car’s all-electric range has yet to be announced. Based on the 13.1kWh capacity, though, we would expect this PHEV to offer at most about 20 miles. We also don’t expect buyers of this rocketship to rely solely on electric power very often.

The S 63 E Performance uses AMG’s integrated dynamics controller to tell its Ride Control+ air suspension with adaptive damping what to do. The air struts can keep the signature S-Class smooth ride, or they can tighten up for cutting up backroads with the help of independently adjustable compression and rebound damping.

Active roll stabilization is also standard. It uses electromechanical actuators that can connect and disconnect the sway bars as well as twist the halves against each other. The former increases ride comfort; the latter cancels out body roll in the bends.

AMG has upgraded the brakes, too. In the front, 15.7-inch rotors have six-piston calipers. At the back are 15-inch rotors with single-pot calipers. An AMG ceramic braking system is an option, saving weight and unsprung mass and giving the heavy sedan track-ready braking.

Still an S-Class at Heart

Even though it’s an AMG, the S 63 is still very much a luxury car. Mercedes-AMG gives it special AMG upholstery with a wide range of leather options, and Merc’s first-class-inspired rear cabin has highly adjustable massaging seats. The car also has Dolby Atmos surround sound.

There are also plenty of cutting-edge driver aids. The collision-avoidance system can now work at higher speeds, Active Steering Assist can help center you in-lane at speeds up to 130 mph, and Active Lane Change Assist can help you make lane changes semi-autonomously when it’s safe.

Lastly, but certainly no small bit of news, the AMG S 63 E Performance gets the vertical-bar AMG radiator grille. It’s the first time Mercedes has put this grille on an S-Class sedan. The Mercedes star on the hood is also gone, replaced with a black-and-chrome AMG badge.

Mercedes hasn’t announced when the 2023 Mercedes-AMG S 63 E Performance will go on sale or how much it will cost. However, we’re expecting it to start to hit dealers early next year and for the price to start somewhere in the range of $180,000 — just a bit more than the previous S 63. 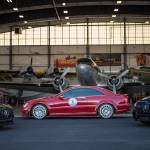 Celebrating 55 Years of Mercedes-AMG at the SCM AMG 1000

We got behind the wheel of three very special cars to celebrate 55 years of Mercedes-AMG at the first-ever SCM AMG 1000 Invitational driving tour. Read more…