Worried about the end of the V8? General Motors isn’t. The automaker has just announced plans to invest nearly $1 billion into engine plants to produce its next generation of V8 engines.

Today we are announcing significant investments to strengthen our industry-leading lineup of full-size pickups and SUVs by preparing four U.S. facilities to build GM’s sixth generation Small Block V8 engine. These investments, coupled with the hard work and dedication of our team members in Flint, Bay City, Rochester and Defiance, enable us to build world-class products for our customers and provide job security at these plants for years to come.

The biggest part of the investment will go to Flint Engine Operations in Flint, Mich. That plant is getting $579 million of the $854 million total to help it prepare for the next generation of GM’s V8 engines. The site will also handle some machining of the cylinder blocks, cylinder heads, and crankshafts.

Right now the site builds GM’s 1.5L turbocharged four-cylinder as well as the 3.0L Duramax Diesel used in the Silverado, Sierra, Yukon, and Suburban. GM says the site will continue building the inline-six during the renovations, hinting that the 1.5L four used in the Malibu could be nearing the end of the road.

GM’s Bay City Powertrain facility, also in Michigan, will get $216 million. The plant will build camshafts and connecting rods, and will help with some machining for the V8 engines.

The Defiance and Rochester facilities will also get an investment to help support electric vehicles. Defiance is getting $8 million to help develop new castings for EVs. Rochester will get $56 million to help it produce cooling lines for EV battery packs.

A Brief History of the Small Block

GM calls its current V8 engines the fifth generation of its small block engine family, tracing the roots back to 1954. That’s when GM first launched its brand new V8 — the first time for a V8 in a Chevrolet since 1918. The engine didn’t become an icon until the fuel-injected 4.6L model arrived in 1956. When that engine appeared it became the first production engine to make one horsepower per cubic inch — a power-making milestone.

Versions of that first-generation engine were made until well into the 2000s, with displacements ranging from 4.3L to 6.6L. The second-generation engine was launched in the 1992 Chevrolet Corvette, and powered GM’s sports cars and large sedans until 1997.

In 1997, the third-gen small block was introduced — the one enthusiasts refer to as “the LS motor.” This one shared no parts with its predecessors and made more power while using less fuel. Gen IV arrived in 2004 and left production in 2020. Gen V was launched in 2013. The Gen V engines power GM’s full-size pickups and SUVs (along with the Camaro and Corvette) and include advanced technologies like variable valve timing and cylinder deactivation.

General Motors didn’t get into the next generation of engines, other than to say it would be building them. Based on the cost of the investment, and GM’s history with the engine, though, we predict that this new V8 family could live well into the 2030s powering full-size GM vehicles. 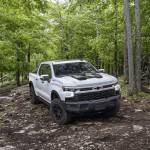 The brand-new Chevy Silverado ZR2 gets the AEV treatment for 2023. The Silverado ZR2 Bison is the new off-road king in the Chevrolet lineup. Read more…