A little-known company, Lordstown, may just beat Tesla, Rivian, Bollinger, Atlis, Ford, and others with a first-to-market electric pickup.

The race to bring an all-electric pickup truck to the U.S. market has gotten fierce over the past few years. While we’ve talked quite a bit about many of the big players, Lordstown Motors has generally flown under the radar.

But while most consumer attention is focused on the likes of Tesla, Ford, and Rivian, Lordstown Motors has an all-electric pickup truck ready to roll off the lines of its massive Ohio manufacturing plant. With its proven electric driveline technology, Lordstown slates production of the Lordstown Endurance pickup late this year.

Expect a first look at the North American International Auto Show in June.

What’s more, more than 6,000 consumers have put down deposits for the truck. From the back of the pack, this pickup is starting to look like a potential winner in the race to market.

The Endurance pickup truck is the first vehicle Lordstown plans to bring to market. Lordstown is targeting commercial fleet vehicle customers first but also catering to the broader truck consumer. 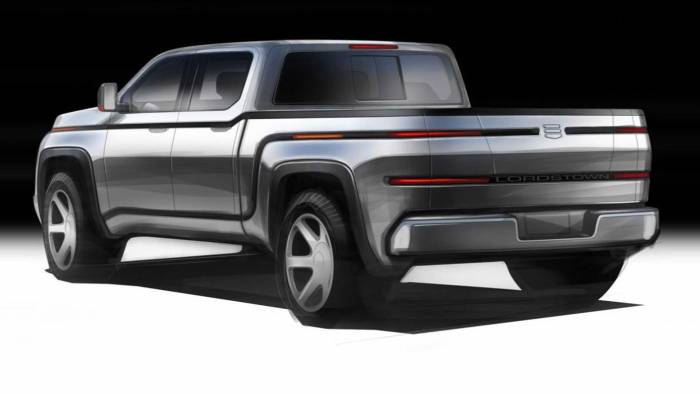 The futuristic-looking Endurance all-electric, four-wheel-drive, four-door pickup seats five. Pricing starts at $52,500 — minus a $7,500 federal tax credit‚ and comes with a 3-year bumper-to-bumper warranty. The truck offers a 250-plus-mile range, 7,500-pound towing capacity, 600 horsepower, and a top speed of 80 mph.

Lordstown plans to have a marketing prototype by April, a public unveiling in Detroit in June, and full production by November. Those lofty goals, of course, have a lot of contingencies, one of which is the $450 million in private financing Lordstown is currently seeking to get production up and running.

The Workhorse powertrain, with hub motors at each wheel, is the foundation upon which Lordstown will build the Endurance pickup.

And the interrelationship between Workhorse and Lordstown runs even deeper. With Workhorse integral in the early vision of the Endurance Pickup, it collected more than 6,000 $100 deposits for the Endurance. Workhorse has transferred these deposits to Lordstown.

For the licensing of its intellectual property related to the Endurance electric pickup and transferring the 6,000 preorders it already has, Workhorse will be a big part of the future of Lordstown. Workhorse now owns 10% of Lordstown Motors, gets a 1% commission on the fist 200,000 Endurance pickups Lordstown sells, and 1% of any debt or equity financing Lordstown gathers.

But Workhorse is currently in financial trouble. It’s hedging its bets on Lordstown and the $5 billion contract it’s vying for with the U.S. Postal Service. If Workhorse is able to get the Postal contract, Lordstown is anticipated to manufacture the vehicles to fulfill that contract.

Lordstown will initially have massive excess production capacity, which is perfect for the best-case scenario at Workhorse. In November 2019, Lordstown was able to secure the 6.2 million-square-foot automotive assembly plant in Ohio, for the crazy discounted price of about $20 million.

The former GM plant that produced the Chevrolet Cruze closed in March 2019. GM sold the plant to Lordstown and has also so far extended loans of up to about $50 million to the company.

Rivian and Bollinger are both working toward similar production and sales dates. Tesla and Ford are at least a year behind. Like Rivian, Lordstown is backed in part by a big U.S. automaker and planning to service commercial customers first.

Our first good look at the Lordstown Endurance pickup is expected at the North American International Auto Show in Detroit in June. You can get in line now for one of your own, however, with a $100 deposit, and help make this all-electric American pickup a reality.