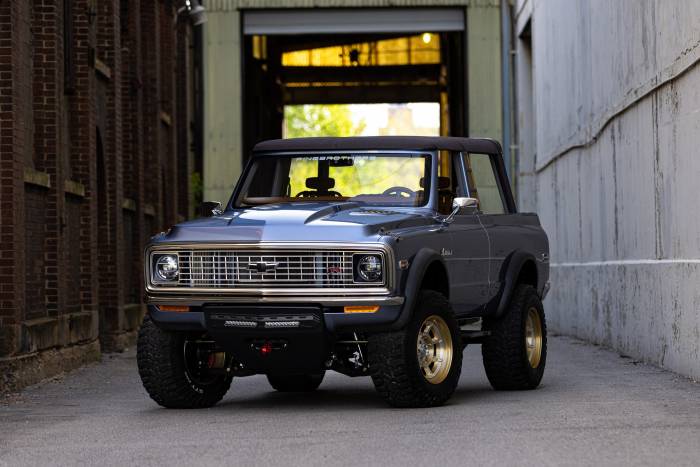 Transformed into a work of art with exquisite craftsmanship, the Ringbrothers Bully is a reimagined 1972 Chevrolet K5 Blazer.

Can an off-roader ever be too beautiful to take off road? This 1972 Chevrolet K5 Blazer might prove that yes, it can happen. The Ringbrothers Bully SUV is absolutely stunning in every detail, from the lawn-chair seats to the carbon fiber fender flares.

Ringbrothers is a Wisconsin-based custom car company founded by Jim and Mike Ring. The company is known for reimagining classic muscle cars and for selling parts to upgrade your own classic ride.

The company has turned its attention to the K5 Blazer before, with past builds called Seaker, Future, and Watchman. This latest build, Bully, makes those incredible efforts look basic.

The starting point for Bully is a 1972 K5 Blazer. Beyond the badge, though, not much remains of the vehicle that left a Chevrolet factory in the 1970s.

It’s tough to decide where to start because Ringbrothers spent more than 8,500 hours building this Blazer. So we’ll begin with the engine because the heart of this beast is a big one.

Wegner Motorsports started with a 6.2L Chevrolet LS3 V8 like you’d find in a C6 Chevrolet Corvette. Before Wegner bolted on a Whipple supercharger and Holly fuel management, the engine was then punched out to an even bigger 6.8L displacement. The result is 1,200 horsepower motivating this beauty.

A Bowler 4L80E four-speed automatic transmission handles the transfer of horsepower from the engine to the rest of the driveline. From there, a Currie-built Dana 44 axle in the front and a Dana 60 in the rear put power to the pavement.

Ringbrothers’ changes to the bodywork are subtle. They’re low-key enough that you could easily mistake it for a very well-done stock restoration — at least until you see the Bully alongside an original Blazer. Put the two together, and it’s immediately obvious that every part of the Bully Blazer has been heavily massaged.

From the bespoke corner lights to the sport bar and roll cage, this Blazer looks better than new and is a work of rolling art. Showcasing a blend of functional parts like the twin air intakes in the hood and primarily aesthetic bits like the leather hood straps, there’s nothing like it.

Steve Pearson at Upholstery Unlimited redid the entire cabin of the K5 Blazer, with the most noticeable change being the seats. The company says it designed the seats around a “floating” theme. Made specifically for this vehicle, they look like the nicest 1970s lawn chairs ever made. The crafting of the leather appears impeccable, with expert detailing and work on the tube framing to match the tone of the hides.

Dakota Digital built the new instrumentation fitted into the Bully’s recreated dashboard. Ringbrothers fitted a modern multimedia system in the dash, controlled by anodized aluminum switchgear. The new controls work well to hold onto the ruggedness of the original Chevrolet Blazer.

Other cabin controls, including the steering wheel and mechanical levers for the four-wheel-drive system, show off the same meticulous attention to detail.

Ringbrothers unveiled the K5 Blazer they call Bully at the 2022 SEMA show. It was showcased alongside the company’s other 2022 builds. This lineup includes a 1948 Chevy pickup called Enyo, a Mustang called Patriarc (not a spelling error), and a Camaro called Strode. 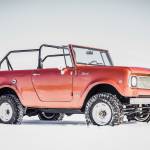