Tuthill Porsche takes classic Porsche 911s rallying. Though it’s not all they do, it’s why the company was founded. One of Tuthill’s latest rally efforts was the East African Safari Classic Rally — an event it’s attended for the last several years. This time around, the company has made a movie to showcase its cars, its struggles, and the rally itself.

Tuthill Porsche was founded by Francis Tuthill, the British rally driver who won the London-Sydney rally in 1993 behind the wheel of a Porsche 911. He later won the British Junior Rally championship and secured a factory drive with Mitsubishi in the World Rally Championship.

Now his company builds, maintains, restores, and modifies Porsche 911s, both classic and modern. If you want to go racing or take your 911 to some of the toughest rallies in the world, Tuthill can help — and can even run your crew on a rally. It supported 17 cars on the East African Safari Classic in 2013.

The rally covers more than 3,000 miles of roads up the eastern coast of the continent. That’s 9 days of punishing, high-speed driving.

At last year’s event, Tuthill brought a film crew along. To show off the action and, of course, make the team look good.

We’ve already gotten a very brief look at the highlights and lowlights of the event through the trailer for the film. Now the full thing has us wishing we were able to make it to next year’s event. Even if we can’t be in one of the company’s classic Porsche entries. 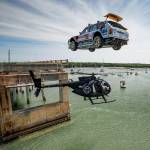 'Gymkhana 2022' steps up the series once again with even bigger stunts and Travis Pastrana driving the Subaru Family Huckster. Read more…