Home » Motors » The Scout Is Back! VW Revives Classic 4×4 Badge in US Electric Market

Once a market mainstay, the Scout SUV line is in for a revival — but in a very different form. The name has been purchased by the Volkswagen Group, the automaker confirmed, and it intends to launch a new family of all-electric vehicles, starting with a pickup and an SUV.

VW will use Scout in the U.S. market much the way Ford is targeting the Bronco for serious off-roaders. But where Bronco is positioned as a brand within a brand, Scout is set to become a standalone brand, the German automaker confirmed. And its products would all use battery-electric drivetrains.

VW is expected to invest an initial $1 billion to relaunch the once-popular Scout line, with concept versions set to be revealed next year. The automaker then hopes to get into production by 2026 and has set a sales target of 250,000 vehicles annually through the new brand. Those are significant numbers all around!

“After Volkswagen’s successful turnaround in the U.S., we are now taking the opportunity to further strengthen our position in one of the most significant growth markets for EVs,” Volkswagen Group CEO Herbert Diess said in a statement. “Electrification provides a historic opportunity to enter the highly attractive pickup and R-SUV segment as a group, underscoring our ambition to become a relevant player in the U.S. market.” 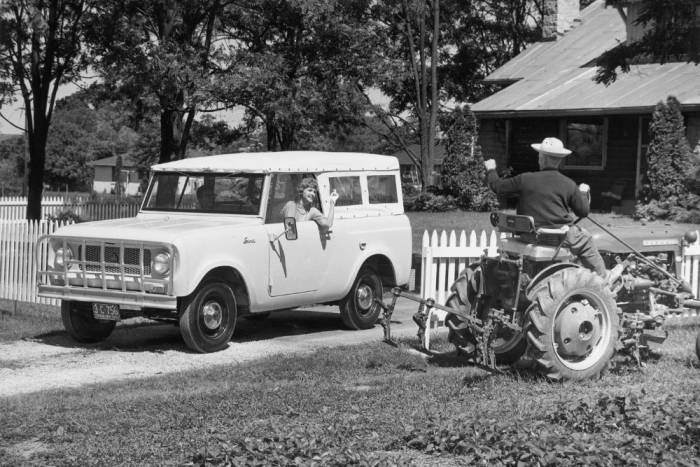 Scout was introduced by International Harvester in November 1960 and soon became that brand’s bestselling product line. But it was ahead of its time, as SUVs then targeted a relatively narrow niche of buyers. The nameplate was pulled from the market in 1980 — ironically, just before the real surge in demand for SUVs began.

International Harvester was itself struggling, and its remnants reemerged in 1985 as the newly formed Navistar. The Volkswagen Group purchased Navistar, along with the rights to the Scout name, 2 years ago.

Scout appears to fit in with Volkswagen’s plans in a number of ways.

The automaker aims to dominate the global EV market, with a planned investment of more than $100 billion. At the same time, it has been pushing to build a bigger presence in the U.S. market, where it has long lagged its performance in Europe, China, and Latin America.

It has been gaining traction over the last several years by downplaying conventional passenger cars like the Golf, while expanding its lineup of SUVs. The Atlas and Taos models were specifically targeted at U.S. customers.

Last year, VW launched its first long-range EV in the American market, fittingly, the ID.4 SUV. It will be built at the carmaker’s expanded plant in Chattanooga, Tennessee. Plans call for more U.S.-made models, including a version of the new ID. Buzz microbus.

“The company we will establish this year will be a separate unit and brand within the Volkswagen Group to be managed independently,” said Arno Antlitz, CFO Volkswagen AG. “This aligns with the new Group steering model — small units that act agilely and have access to our tech platforms to leverage synergies.”

But the Scout plans show how VW wants to go after an entirely different segment of the market. Like Bronco, as well as Jeep, it will target serious off-roaders and, potentially, commercial customers with more rugged, albeit all-electric, light trucks.

That is expected to begin with the launch of both an SUV and a pickup. VW once sold a small pickup in the U.S. based on its old Rabbit model. And it continues to produce the gas-powered Amarok for Europe and other foreign markets. But Scott Keogh, the CEO of the Volkswagen Group of America, recently signaled interest in bringing a pickup to the U.S.

The Scout news raises a number of questions. For one thing, what size pickup will VW deliver? It is expected to develop a battery-powered version of the Amarok, but full-size trucks are the heart of the U.S. truck market.

There also has been speculation VW might turn to Ford for help in developing a pickup. The two carmakers have lined up several joint ventures, and VW is providing the underpinnings for several battery-electric models Ford will sell in Europe. Ford CEO Jim Farley last month revealed his company is developing a second battery pickup, smaller than the new F-150 Lightning. Some observers have speculated it could work with VW on a pickup for the new Scout brand.

What seems clear is that VW hopes to take advantage of the ongoing U.S. boom in light trucks — SUVs and pickups now account for more than two-thirds of new vehicle sales. At the same time, there has been growing interest in products capable of going off-road, as demonstrated by the launch of the new Subaru Wilderness sub-brand, GMC sub-brand AT4, as well as Bronco.

Some automakers see an opportunity to tie that together with the shift to battery power. General Motors recently relaunched Hummer as an all-electric sub-brand of the GMC marque. It now offers a pickup model, with an SUV to follow.

No matter Volkswagen’s exact plans, we’re excited to see another adventure-ready electric lifestyle vehicle coming to the U.S. market, and with a classic 4×4 name to boot.

If you are a grill master who also loves traveling, then the HitchFire F-20 may be exactly what you never knew you needed for adventure grilling. Read more…