A Denver schoolteacher is leading a wave of people interested in changing the name of Mount Evans, one of Colorado’s most iconic 14,000-foot peaks.

Sixty miles west of Denver, the highest paved road in America winds up the shoulders of Mount Evans. You can drive to the top, which makes it a huge tourist destination in the summer.

There’s also a revived ski area called Echo Mountain on the state highway to Mount Evans, known as Colorado 103 — or Squaw Pass. That’s another name with a derogatory connotation. But first, the famous peak. 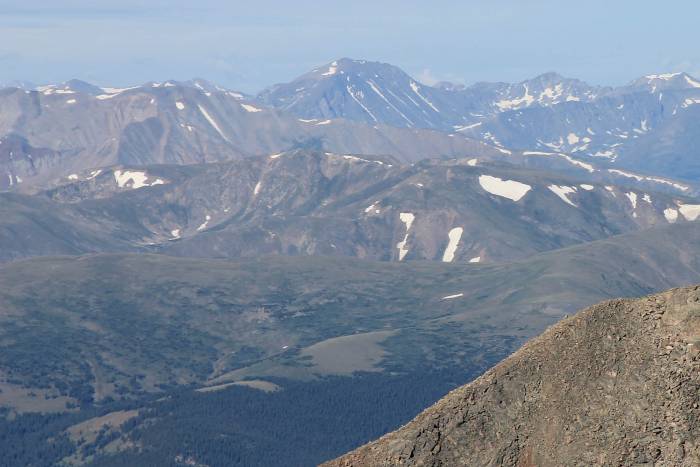 Mount Evans is literally in my backyard. I’ve lived in Clear Creek County, the seat of Mount Evans, for 12 years and in Colorado for 20. And I never came upon the history behind this mountain’s namesake.

And that’s a shame, according to a Denver teacher and others pushing to disconnect that beautiful mountain from an atrocity ordered by its namesake, Colorado Governor John Evans.

In 1864, Governor Evans issued a decree that led to the infamous Sand Creek Massacre, one of the darkest stains on Colorado’s history.

First, Evans asked all “peaceful” Native Americans to report to the Sand Creek reservation in southeastern Colorado. After that, he invited white settlers to kill and destroy all “hostile” Native Americans, according to historical documents.

But a full-on slaughter ensued when governor-appointed military head Colonel John Chivington went rogue. He led some 700 men to al village in Sand Creek while most Cheyenne men were away hunting. Chivington and his drunken crew killed 105 women and children and 28 men of the Cheyenne and Arapaho tribes. The site of the massacre is now a National Historic Site.

To date, numerous people have written letters to the editor calling for a change to the mountain’s moniker. But Denver schoolteacher Kate Tynan-Ridgeway, a third-generation Coloradan, was the first put in motion an effort to officially rename the 14er for the Sand Creek victims.

It’s not unheard of for a major peak’s name to change; Mount McKinley is now Denali due to lobbying efforts by Native American groups and the public.

Tynan-Ridgeway believes indigenous communities should have a greater say in the matter of how this mountain moves forward.

“We want to get rid of the Evans name, but the name of the mountain should be decided on by stakeholders more invested than I am,” she said in an interview with Denver’s 9News. “I’m the catalyst and hopefully people can take over from there.”

Some Native Americans have suggested that the name change could be healing. For example, one visiting artist, Lyla June, made her impressions as a member of the persecuted tribes clear on social media recently.

This summer, in a formal request to the United States Geological Survey’s U.S. Board of Geographic Names — which oversees geographic name usage — Tynan-Ridgeway proposed the name change from Mount Evans to Mount Cheyenne Arapaho.

But many entities will weigh in before a decision is made, including Denver Parks and Recreation, which manages a major park on Mount Evans, Clear Creek County; the U.S. Forest Service; and the Indian Affairs Commission for the City of Denver.

And make no mistake, despite the historical record of Evans’ actions, there’s no consensus on whether to remove his name from the mountain.

Jennifer Runyon, a research staff member for the U.S. Board on Geographic Names, told us that her organization is waiting to hear the U.S. Forest Service’s recommendation. Clear Creek County does not support changing the name of Mount Evans due to emergency response issues and the long-term use of the current name, she said.

Runyon said it would likely be at least spring before the board renders its decision in the high-profile case.

Whether it’s the name Tynan-Ridgeway proposed, another one, or no change at all remains in question. In the meantime, anyone looking to weigh on the Mount Evans name change can send an email to the United States Geological Survey here. And here’s the reference proposal ID: 9463.

Up Next: Interbike Canceled: Show Organizers Hope for 2020 Return