Conjecture about a Raptor variant has existed practically ever since Ford announced the Bronco’s resurrection in 2017.

Now, a forum post strongly indicates the Bronco Raptor could arrive within the next year — predating Ford’s previous estimates. This should come as no big surprise because as soon as the Bronco rejoined Ford’s SUV and truck lineup, many started counting down the days until it got the Raptor package.

We’re all familiar with the F-150 Raptor, and the Ranger Raptor is already available internationally. Because the Bronco shares a platform with the Ranger and is positioned to compete with adventure-oriented SUVs like the Jeep Wrangler, it only made sense that buyers would eventually get the option to add on this aggressive package.

Little did anyone know that an online forum poster, known only as “monkeysdad,” would all but confirm its early arrival. Mining through the company’s encoded CONCEPS internal ordering system, monkeysdad found what look like telltale signs of a 2022 Ford Bronco Raptor.

“Rumors have been flying about a high-performance desert runner-style Bronco in the pipeline for some time now,” Bryon Dorr, editor-in-chief of AutoWise, told GearJunkie. “It had been codenamed the Warthog project, but for marketing purposes, it is smart of Ford to probably change the name to Raptor.”

Ford dealers use two systems to order vehicles from the company: CONCEPS and WBDO. CONCEPS is old, grid-based, and encoded. While WBDO is newer and plain text-based, they both link to the same core ordering system. 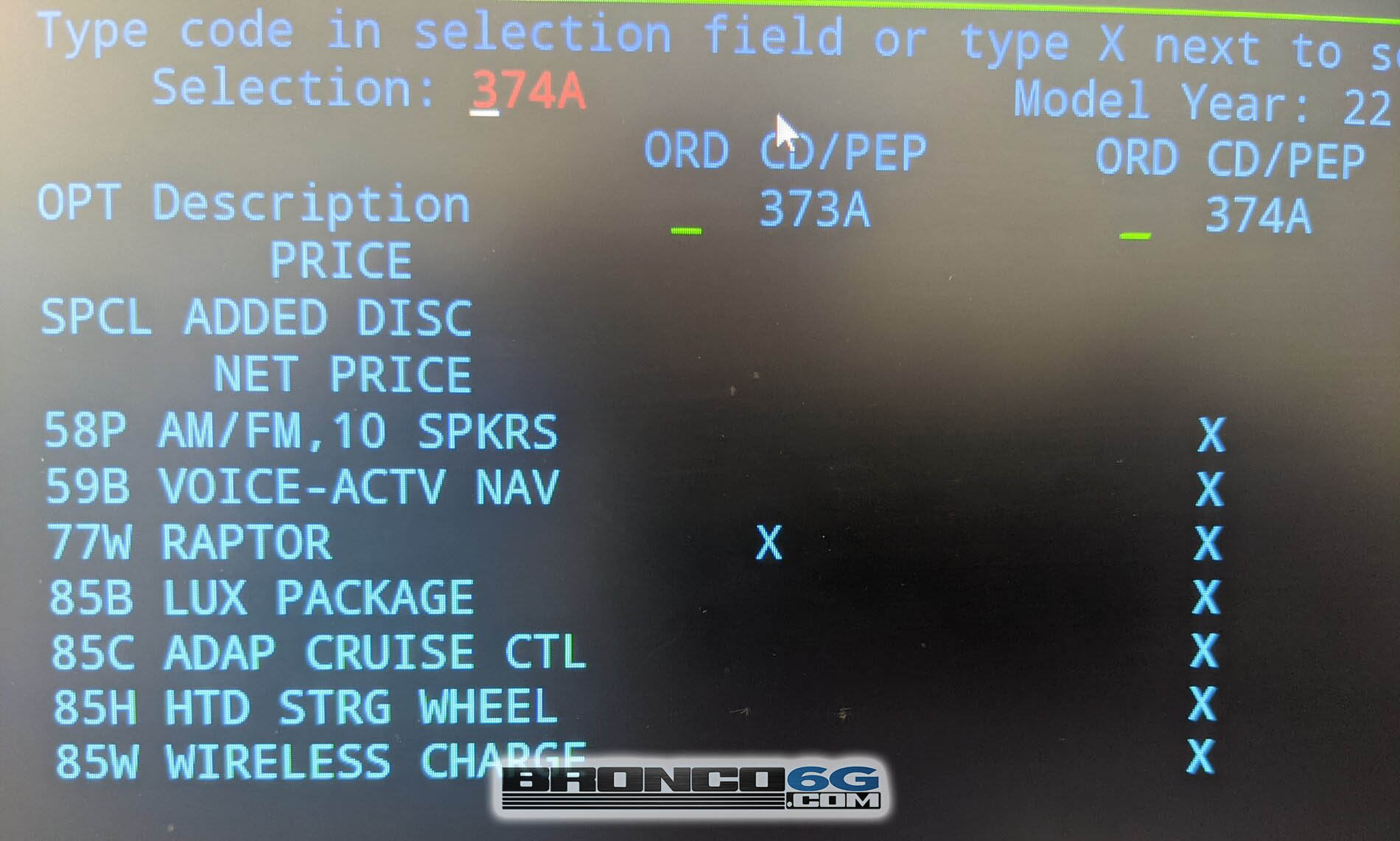 OK, “RAPTOR: X.” Great, but what else? Here’s the core of what the post says:

“After reading Zach’s thread on the ordering process and using WBDO I took a look at the old CONCEPS ordering system and found a new body code: E5J. This code did not exist for the 21MY.

After looking through the Model Year 2022 Bronco Raptor is coming around. Two different levels a base Raptor 373A and a higher package that includes lux in a 374A. Also see the new colors in Erupution Green, Hot Pepper Red and Code Orange. Really exciting stuff and will continue to see if there are other options available and keep everyone posted.”

E5J appears to be the code for a four-door 2022 Bronco. Meanwhile, 373A and 374A are trim levels that get the Raptor treatment. There’s also plenty of mildly stimulating information about the higher trim level, like the wireless device charging, adaptive cruise control, and voice-activated navigation.

If it receives the same Raptor love as the rest of the lineup, the Bronco will have suspension upgrades from Fox, gnarly off-road tires, and plenty of clearance.

And if it carries over the engine from the F-150 Raptor, it could get the base model’s 450-horsepower twin-turbo 3.5L Ecoboost V6. Another option would be some kind of souped-up version of the Bronco’s 2.7L V6.

Conclusions: Strong Rumors, but Will Delays Be Stronger?

If monkeysdad’s information pans out, the Bronco Raptor will arrive a lot sooner than Ford has previously stated. But quality concerns have already dogged the 2021 Bronco’s delivery, and ordering delays still plague the industry at large.

But between rumor hounds and Ford marketing, it’s generated enough buzz to virtually guarantee popularity whenever it lands.

“I doubt we’ll see this vehicle until at least model year 2023 based on the recent production delays and hardtop issues,” Dorr told us. “But for the next few years, Ford will have no issues selling every Bronco it can produce.”

Ford Bronco 2021: That Was Worth the Wait

Ford has been teasing us with the 2021 Ford Bronco for nearly 2 years. We finally saw it and are already drooling. Read more…

Up Next: Fit for Any Bike: Old Man Mountain ‘Divide’ Rack Adds Cargo to All Rides