Alyssa Clark describes herself as an ‘endurance adventurer with an ultrarunning problem.’ The problem? She likes to run marathons — a lot.

Alyssa Clark began running a marathon a day, every day, in quarantine to countdown until she could get back outside.

“I’ve set myself the challenge of running a marathon [every day] until the world has healed enough for us to be released from isolation,” she shared on Instagram. When the lockdown in Italy (where she lived at the time) was extended, Clark continued running her consecutive marathons.

When the lockdown lifted, she kept running. Even when she and her husband moved to a new continent (they now live in Florida), she got her miles in. Luckily, we had the chance to chat with her in between marathons to see what she’s all about. 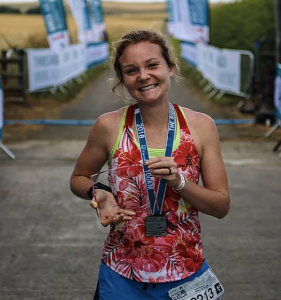 What’s next: Across Florida 200 Ultra

GearJunkie: You describe yourself as an “endurance adventurer.” What does that mean?

Clark: I heard the term from Luke Tyburski, who’s done some crazy adventures. He actually has a movie out called “The Ultimate Triathlon.” But he coined the term, and I thought it was perfect.

Where I connect with it is that I love to race, but most of all I’m an adventurer at heart. So it’s about using my endurance background to find and do big adventures.

How did you decide to start running a marathon a day?

It started with really just a need to fill my endurance adventuring desire in quarantine. So I randomly brought up the idea up with my husband, and he thought it sounded pretty reasonable, so I kind of just jumped into it.

It does get easier with routine. Around marathon 26 (I knew Alice Burch’s record was 60), I started thinking about the record.

Note: The overall male record is currently held by Ricardo Abad Martínez, with 607 marathons. And for women, Annette Fredskov ran 366 marathons in 365 days in 2014, though it was not certified as a Guinness record.

You kept running a marathon a day even while traveling across continents. Any memorable runs from your travels?

The marathon that I ran in Germany at 1:00 a.m. was definitely strange, but I’ll never forget that memory. And it’s weird, but the two after that were two of my best marathons.

I was just relieved that things didn’t get messed up [while traveling]. I didn’t realize how much the travel would take out of me until about 4 or 5 days later, and it definitely took a bit to bounce back.

Do you have a favorite place or route you ran?

There was one marathon in Italy after the travel bans lifted. My husband took me to one of our favorite mountain areas with a lake, so I did a marathon around it, and that was really fun.

And when we were traveling, I did two marathons in Charleston, South Carolina. For the first one, I got dropped off so I could run in one continuous line (a point-to-point), which was a blast.

Help us get in your mindset — how do you prepare for and start your day?

I make sure everything is laid out the night before — I want the least amount of barriers. So I lay out my pack, my clothes, fill my water bottles, all so it’s easy for me to get out the door.

I also try to compartmentalize: Once I finish the marathon, I don’t stress over it. It’s almost like having a 4.5-hour workday, then you’re done!

What gear do you use and what shoes are you running in?

I run in HOKAs. I’ve gone through about four or five pairs, and I have two that I’m rotating through right now. I have a couple pairs of Cliftons and Bondi 6s. I run in XOSKIN toe socks pretty much every day, and they’re great because I almost never get blisters, which is key.

I use a Nathan running pack, or sometimes a waist belt. And clothing-wise, I’m kind of funny, I just rotate through a few old pairs of shorts. And to document miles, I wear my Garmin watch.

In terms of fueling, I use a lot of Honey Stinger products, and then I’ll throw in some bars and electrolytes. Running [in Florida] in the heat is really hard, so I don’t eat as much — I focus on getting electrolytes and hydrating.

Especially with these marathons, with back-to-back-to-back effort, you need to be preventative and stay on top of things before they become a problem. One of the biggest things is getting sleep. You cut your sleep down, and that just brings injury … so get in 8 or 9 hours, and maybe a nap if you have time.

Can you talk about the fundraiser you started?

I’ve been a bit tentative to do a fundraiser because it’s such hard times for people now.

But then one of my co-alums from college [Hamza Farrukh] reached out to me and asked if I would partner with him to raise money for his organization during my last 10 marathons. The organization [Bondh E Shams] works to bring clean water systems to schools in Pakistan and Sudan, and I thought, “Absolutely.”

It’s a great cause, and water is so important to being an athlete. So I thought it was a great connection — and a great way to end my marathons.

Any advice for other runners?

Nothing lasts forever. Even if you have a bad moment or a bad marathon, everything is temporary and it will get better. I had a horrible marathon yesterday, and I thought, “The rest of the marathons are going to be bad or get worse.” But I had to remind myself that everything gets better.

I never thought it would go this far or that this many people would care. I just hope I helped motivate other people to push through these hard times. That means the most to me.

Up Next: Deer Conservation Gets Boost From Major Nonprofit Merger

Saving…
Deer Conservation Gets Boost From Major Nonprofit Merger
Bikepacking With Kids: The Gear I Used
×