It’s Britney, bitch! The ’90s and early-2000s pop star claims she just PR’d the 100-meter dash with a time of 5.97 seconds. That’s correct, the former VMA winner ran the length of a football field faster than any athlete ever has.

And in so doing, she also smashed Usain Bolt’s standing 100-meter world record of 9.58 seconds. You read that right. Britney Spears says she’s nearly twice as fast the Jamaican Olympic gold medalist. And by most measures, Spears’ 37mph pace likely makes her the fastest human being ever.

And all bias aside, her fans noted as much.

“Literally impossible for her,” @_its.flash replied.

“With those speeds, she is no human,” @adamgx_ pointed out. 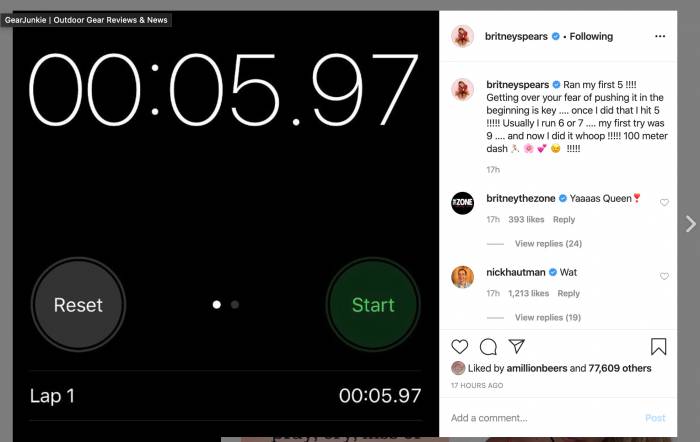 Here’s some helpful context around Spears’ astonishing speed. That distance and time work out to 37.46 mph. Granted, that’s an all-out sprint, but with proper distance training, it would put her at a 42-minute marathon. With that, the 38-year-old would break the daunting one-hour barrier and beat Eliud Kipchoge’s 2:01:39 record by more than an hour.

But if we stick with shorter distances, she would also set the mile record with a time of 1 minute 36 seconds. That would more than halve Hicham El Guerrouj’s time of 3:43. It also means she can run a full mile in less time than it takes to microwave popcorn.

However, it’s still worth noting that Spears is not peerless in her speed. With her current fastest time, she would have lost the 1973 Kentucky Derby to Secretariat — and his record-setting run of 1 minute 59.4 seconds — by a nose (0.6 seconds, to be exact). Of course, we don’t know how well Britney runs on dirt, and it’s ludicrous to even suggest such a matchup, as it would require a time machine.

But it’s still worth noting she would have won most Kentucky Derby races in the modern era. But let’s be realistic and say hats off to the current fastest human alive.

Up Next: Celebrated Greek Climber Michalis Tsoukias Dies from Coronavirus