I’ve read the CAIC’s avalanche forecast pages for years. Never has it been such a harrowing story of danger in the backcountry!

If you’re planning a trip into the Colorado backcountry in the next couple days, you’d best reconsider your plans.

I just sat back for some easy reading on the Colorado Avalanche Information Center website today, but what I got was more of a horror story. This is some epic, old-school heavy stuff.

“Avalanches are running to valley floors and some are exceeding historic run outs,” reports the forecasting organization.

OK, you have my attention.

“There isn’t a piece of avalanche terrain that hasn’t slid.”

Whaaaat?! Yes, that is what one avalanche forecaster wrote.

I’ll admit I don’t read the avalanche forecast every day, but in my 8 years of backcountry skiing, it’s in heavy circulation among my desktop bookmarks. And I’ve never, ever seen it look like this.

Oh, and shall we mention that the forecast risk is certain for all aspects?! Basically, if you go on avi terrain, you’ll get buried in an avalanche of historic proportions.

The choice is yours.

Highways Closed Most of Tuesday

Traffic in Summit County, Colo., was, as reported by our editor who got stuck up there today, “a disaster.”

“It was total chaos,” he said. “It should be a PSA: Avoid I-70 for the foreseeable future.”

OK, that’s a bit of hyperbole. C-DOT and avalanche mitigation crews have been hard at work making roads safer, and by the time of writing this, traffic was back to flowing smoothly between Denver and Silverthorne. But I-70 was still closed between Silverthorne and Vail, with no word on when to expect it and other closed roadways to reopen.

However, cars were buried in an avalanche on Highway 9 near Copper Mountain during the afternoon. Everyone was safe in the end, but it’s hard to say how the cars fared.

Check out this detonation near Jones Pass to see why crews are a little nervous about cars getting caught.

So it may be worth reconsidering imminent travel plans that require a trip across the Colorado mountains.

The CAIC is currently predicting extreme avalanche activity in four zones at once (Aspen, Vail and Summit County, the Sawatch Range, and Gunnison). This is the first time that’s happened since it started forecasting in 1973.

But for anyone who appreciates the science of avalanche forecasting, it’s worth a visit to the CAIC page to read some uncommon forecasts. The entire state of Colorado is basically under high to extreme risk.

I came across this gem on social media but couldn’t find the original location on the site. 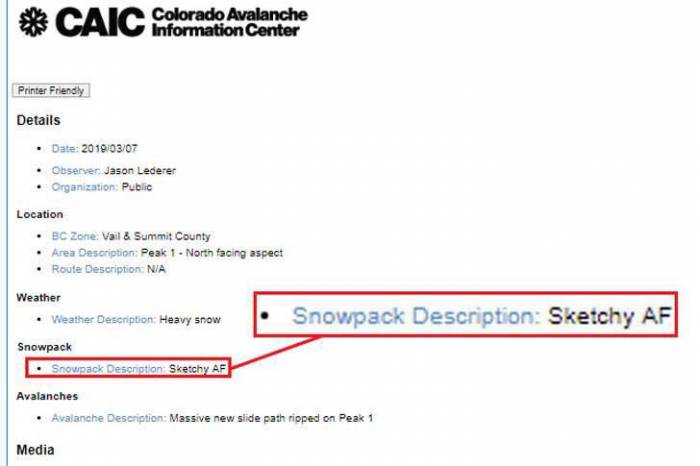 It’s a good day to get some reading done. And this paragraph from the Gunnison region sums it up nicely.

“The bottom line is that if an avalanche has ever run in a given piece of terrain, consider that area off limits today. Avalanche mitigation is underway on the state’s highways, but many backcountry roads, cabins, powerlines, groomed trails or other infrastructure are un-mitigated and may be threatened today. Watch out for the roofs. If in doubt, just don’t go there right now.”

Up Next: Far Out: Copper Will Lift-Serve Tucker Mountain Chutes Next Season