After months of searching (and thousands of applications) Columbia Sportswear has selected its 2016-2017 Directors Toughness. 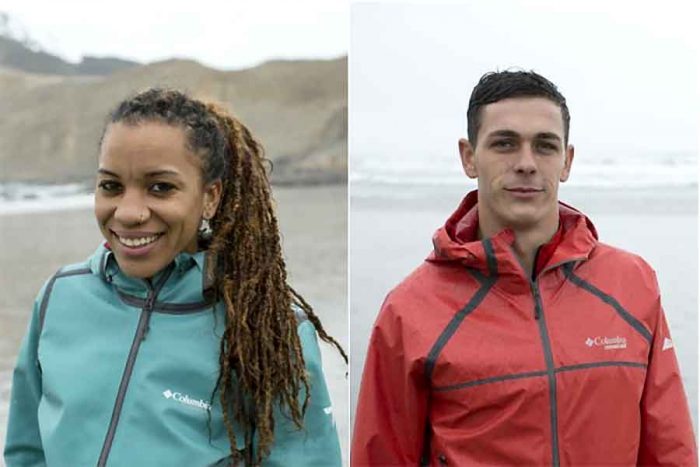 Meet Faith Briggs and Mark Chase, two of the luckiest—er, toughest—people on earth. They are the newest addition to the Columbia team and will spend the next nine months putting some of the industry’s nicest gear through the harshest environs.

For the second year in a row, Columbia wants two everyday, (extra)ordinary people to travel, test, blog, and ensure that its gear can withstand even the toughest users.

Candidates faced a barrage of pressing and downright odd questions. They even had to complete mid-interview challenges like running up Oregon’s Timberline Trail, kayaking the East River, and hiking the Scottish highlands

We got an exclusive interview with the duo in advance of their introduction. The pair will replace last year’s directors, Lauren Steele and Zach Doleac.

GearJunkie: Way to go, you two! When did you officially find out and how did it feel?

Briggs: Um, I got the phone call about four weeks ago, and I didn’t really believe it was for me. I was absolutely shocked!

Chase: Oh yeah, same. I watched all the videos of past competitions beforehand, so I thought I never really had a chance. It was unbelievable to get that call.

How about that interview—what was the hardest part?

Briggs: Well, I was surprised because I was actually the only person from New York City at the New York interview. So I never for a second believed they would tell us to get in the East River—nobody does that. Then they handed me a paddle and pointed to the kayaks and said ‘Paddle out to Governors Island.’ It was surprise after surprise.

Chase: There really wasn’t any one part that was the most difficult. There was so much pressure [Columbia] puts us under. People are firing questions at you, and then there’s a physical challenge, and then the last guy asks some really tough questions taking no prisoners. The whole thing was surreal.

What makes you tough?

Briggs: I have mental toughness. Whatever challenge it is, I have what it takes. I know I can work my way through.

Chase: Definitely my mindset—keep pushing and do not give up. I can always take one more step, one more step. No matter what, you just don’t give up.

What would you say to someone who wants to be tougher?

A lot of times once you get there, you’re going to do it. You force yourself to get going. The toughest thing is getting yourself there — to the slope, or out of bed. One foot in front of the other.

Chase: Like I said, just keep going. Everything can be learned, it doesn’t matter what you don’t know or haven’t done. Progression over perfection. Just keep getting up.

Briggs: I was always a sprinter in high school and college, short distance swimming and running. In college, I had some major injuries, six stress fractures in my shins.

My road to recovery required long-distance running. That transition and recuperating was the toughest part—it just wasn’t me. But now, I run better than I did in high school.

Chase: Mine really wasn’t physical, actually. The toughest thing I’ve done was quit a job I didn’t like or feel suited to, and then holding out for something better. I’ve just been taking photos around Northern Whales, not knowing exactly what I want to do.

Then this opportunity came along and made everything worth it. Holding off, believing, and trusting that something great would come along, that was tough.

Who is your toughness idol?

Briggs: My mom. It sounds silly, I know, and she’s not someone running outdoors all the time. But I’ve seen her deal with three kids and trying to finish grad school with us, working nights in restaurants to keep her family afloat. She’s an incredible woman and absolutely the toughest person I know.

Chase: Everyone. No, seriously, everyone has their own story. If you listen to any one person long enough they all have the potential to be tough, and have done something remarkable.

What do you want people to know about you, aside from being tough?

Briggs: I’m a documentary filmmaker, I love people’s stories. I think it’s a wonderful way to get in touch.

Everything I do I want to be part of a greater conversation. I want to be able to talk to all sorts of people, to be a global citizen.

Chase: Come find me. If we’re in the same town, same time—let’s get outside and have fun. I’m open, ready to go. Let’s rock it.

Up Next: Keep Public Land Public: An Overland Expedition