A map, clues, and hints on social media led #GearDrop participants to medallions (and their associated prizes) in New York and at points around the USA. 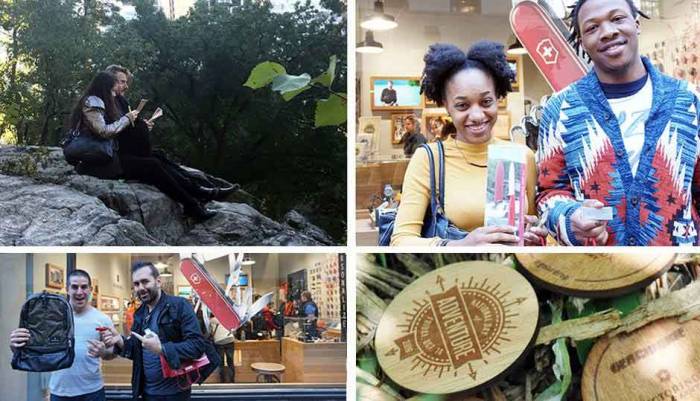 Friday, October 14th was the ‘National Day of Adventure,’ and as a part of the festivities, we teamed with Victorinox Swiss Army to launch a first-of-its-kind event called GearDrop.

Dozens of medallions were hidden in New York and four additional cities around the country, including Los Angeles, Seattle, the Twin Cities, and Short Hills, New Jersey.

A race map and clues led participants to the GearDrop points. In total, 54 medallions were hidden across five states and dozens of participants won gear from Victorinox Swiss Army.

The custom wooden medallions were placed in five states and hidden under bridges, in tree bark, taped under park benches, or notched between bricks.

In New York, where the big event took place, participants showed up early at the Victorinox store in Manhattan’s Rockefeller Center. At the “go!” (noon on Friday, Oct. 14th) the racers streamed out of the store, maps in hand.

Swiss Army knives, Victorinox watches and luggage, and other prizes were awarded to anyone who found a medallion. An open-to-anyone raffle gave more chances to win in New York and beyond.

In other states, clues were released on social media and the #GearDrop site. People hiked, bushwhacked, searched in city parks, and eventually located the medallions, which awarded a prize pack from Victorinox with $1,000+ in gear for each state (see photo above).

Congrats to everyone who came out and “scavenged” for the gear. The GearDrop event was a good time and a valid excuse to get outdoors and run, hike, bike, and explore on a day set aside for adventure.