Most Olympic snowboarders ride a relatively common brand, like Burton or GNU. U.S. slopestyle and big air Olympian Julia Marino rides a Prada. Why did that almost get her kicked out of the competition?

On Feb. 6, Julia Marino of the United States took silver in the 2022 Olympic women’s slopestyle finals. Anyone who watched her do it could easily catch a glimpse of the red stripe on the bottom of her whiteboard, emblazoned with distinct PRADA lettering.

Seeing high-visibility branding on the bottom of snowboards at the Olympics is far more common than seeing it almost anywhere else. The International Olympic Committee (IOC) is notoriously tight-fisted about marketing rights. Snowboards are a notable exception — Olympians’ boards are almost always factory-branded in the typical bold style.

Turns out there’s a reason why. Two days after her second-place finish, Marino posted a photo to her Instagram story that showed the Prada lettering covered up with red marker. Marino wrote in the overlaid text that the IOC now refused to approve the board — even though officials had approved it before the slopestyle event. 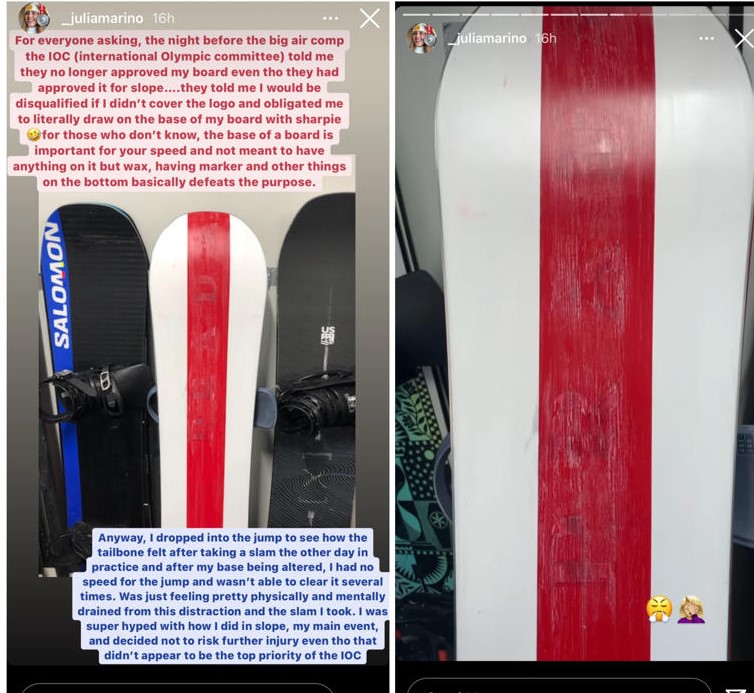 Evidently, the committee called the shot because of a clearly stated rule about what kind of companies can and can’t advertise on snowboards.

The Devil Is in the Details; It Also Wears Prada

The International Ski Federation (FIS) handles the IOC’s snowboarding rules. Branding on the bottom of snowboards falls under what it calls “Manufacturer’s Identification.” Section 1.2 of its “Specification for Competition Equipment” regulations state:

The issue? Prada, clearly, does principally use its branding for non-sports equipment. The IOC said it wasn’t aware of the Prada board until after Marino competed in slopestyle. Then, it flagged the board because Prada isn’t primarily a sporting goods business.

“A solution with minimal impact was sought, including the possibility of keeping the same equipment and removing the branding,” the IOC said in a statement to the New York Times.

Marino’s agent Claudia Cusano unsuccessfully contested the IOC’s ruling. She argued that Prada Linea Rossa, the offshoot of the fashion brand that makes the snowboard, is a sportswear brand. The IOC, however, didn’t change its tune.

Julia Marino Withdraws From Big Air and Calls for Consistency From IOC; Community Speaks Up

The distinction burned Marino, who withdrew from women’s big air before qualifying.

Cusano told the New York Times that the IOC’s interference “distracted” the snowboarder prior to a big air practice session and caused a bad fall. Not only that, Marino found that the marker on the bottom of the board kept her from getting enough speed for jumps. “Having marker and other things on the bottom basically defeats the purpose [of waxing],” she wrote on Instagram.

Marino wrote that the hassles and fall left her “physically and mentally drained,” so she bowed out of the competition. For now, she retains her slopestyle silver medal, which was coincidentally Team USA’s first 2022 Olympic hardware.

In a televised interview, she called on the IOC for consistency.

“In my opinion, when a board is approved, it’s meant that all the rules were looked at and were met for the board to have been cleared in the first place,” she said, appearing to refer to the IOC’s equipment evaluation.

Community opinions have varied. One former Olympian appeared to split decisively from Marino’s statement, placing the onus to know the rules squarely on athletes. That individual, whitewater kayaker Corran Addison, levied his opinion in no uncertain terms on Facebook.

“It is up to the athlete, their coaches, their managers and their national body to know [their sport’s] rules,” Addison wrote. “It is the athletes [sic] job to know this, and if they don’t then they’re an idiot. This is not the fault of IOC or FIS.”

Prada Board Sells Out; IOC Claims It Compromises ‘Olympic Movement’

Throughout the debacle, Prada appears to have done little except passively attract publicity. As of this writing, the $3,600 boards like the one Marino rode were sold out on its website. Neither the fashion brand nor its sportswear offshoot has yet commented on the controversy.

A statement from the IOC read that Marino’s board went against “Olympic advertising rules that protect the funding of the Olympic Movement.”

The Olympic Movement’s stated goal is “to contribute to building a peaceful and better world by educating youth through sport practiced in accordance with Olympism and its values.”

A big chunk of its funding comes from The Olympic Partners (TOP) Programme, the highest level of Olympic sponsorship. TOP sponsors include Coca-Cola, Samsung, and VISA.

China to Launch a Robotic Skiing Insect at the Beijing Olympics, Because of Course

In what we can only assume is further evidence the end is nigh, Chinese engineers have 'perfected' a six-legged robot and will unleash its terror on the world at the Winter Olympics. Read more…