Peloton stock tanked 25% in 15 minutes on Thursday, Jan. 20, as the brand announced a production stoppage.

Production of the Peloton Tread+ will stop for the rest of the company’s fiscal year. And Peloton Bike production is set to resume in April.

The announcement comes after the brand ceased building the Bike+ in December. Production of the brand’s range-topper won’t resume until June.

The reason for the stoppage? In a leaked confidential presentation dated Jan. 10, 2022, Peloton pointed to a “significant reduction” in worldwide demand for its connected fitness equipment. To explain the dropoff, it cited price sensitivity among shoppers as well as increased competition.

A trend of 'connected fitness' has brought screen-based workouts to the mainstream. Read more… 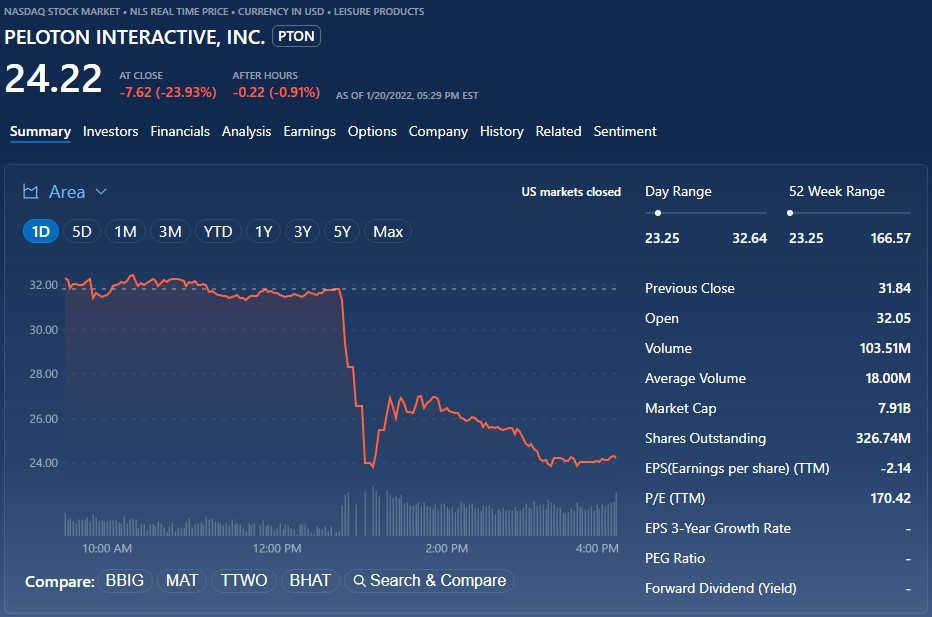 Reportedly, the brand has lost $40 billion of its previous market cap apex of $50 billion — a high watermark it established in January 2021.

The presentation traces the brand’s supply surplus back to outsized demand expectations set in October 2021. On Dec. 14, it found that its third- and fourth-quarter forecasts for demand and delivery were far too high.

Notably, the latest forecast doesn’t account for any added impact of upcoming price hikes. Peloton plans to start charging customers an extra $250 in delivery and setup fees for the Bike and $350 for the Tread+ at the end of this month.

Per CNBC, the brand has hired a consulting firm to find ways to cut costs. Job cuts and store closures could be on the horizon; one source said Peloton has already started laying off sales staff.

The beleaguered brand is well-acquainted with production challenges. Near the outset of the pandemic, it scrambled to keep up with runaway demand. It had also previously halted Tread+ production after a rash of reported injuries involving the machines, including a child’s death.

Peloton CEO John Foley responded late on Thursday to the media flurry. He said reports that the company will halt “all production” were false, but he appeared to corroborate most other details.

Notably, the company also declined to comment on the production stoppage details released by CNBC. In a memo, Foley said the media was lacking context about the plans.

“We are taking significant corrective actions to improve our profitability outlook and optimize our costs across the company,” Foley told The Street. “This includes gross margin improvements, moving to a more variable cost structure, and identifying reductions in our operating expenses as we build a more focused Peloton moving forward.”