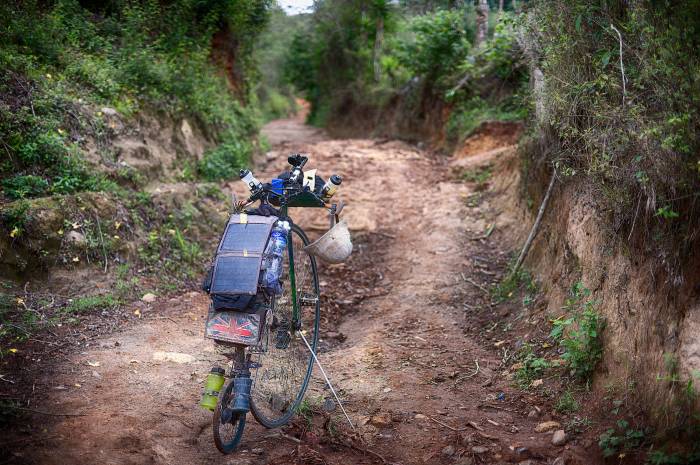 To call Joff Summerfield a bike enthusiast would be an understatement. Not only did he build his very own penny-farthing, but he’s also ridden it 38,000 miles around the world — and counting.

Picture a 4-foot-tall front wheel, no chain, and solid rubber tires. This is a penny-farthing bicycle (circa 1870s, before someone invented gears, chains, or pneumatic tires). We spoke with maybe the best penny-farthing rider in the world, Joff Summerfield, who’s cycled more than 38,000 miles around the world on his.

Not only that, he built his own.

Granted, he’s not the first to take on a crazy challenge while bike touring. But in our opinion, the sheer amount of miles this cyclist has accumulated on his penny takes the cake.

GearJunkie: How did you get into penny-farthings? And when did you first get into bikepacking?

Summerfield: My first bikepacking trip was a 5-day ride from Calais, France, to Amsterdam, Netherlands. I did this on a 1940s BSA Parachute bike. That’s when I realized I loved it. I wanted to see the world on a bicycle.

Now, I do like making things, so of course I wanted to make my own bike. Making a touring bike seemed too simple, a mountain bike too normal. The craziest thing I could think of was to build a penny-farthing.

What do you do for a living?

My original occupation was as a race engine builder. I worked in Formula One for 5 years before becoming going into building penny-farthing bikes. I did this until 2014 when I left to cycle around the world again.

2021 is going to be a change for me, as I am taking on a new workshop to start building pennies again.

How many countries have you been to? How many have you cycled through (or around)?

I have cycled my penny-farthing in 31 countries, including the United States. Denmark is the only country I’ve visited that I have not been to with my bike. 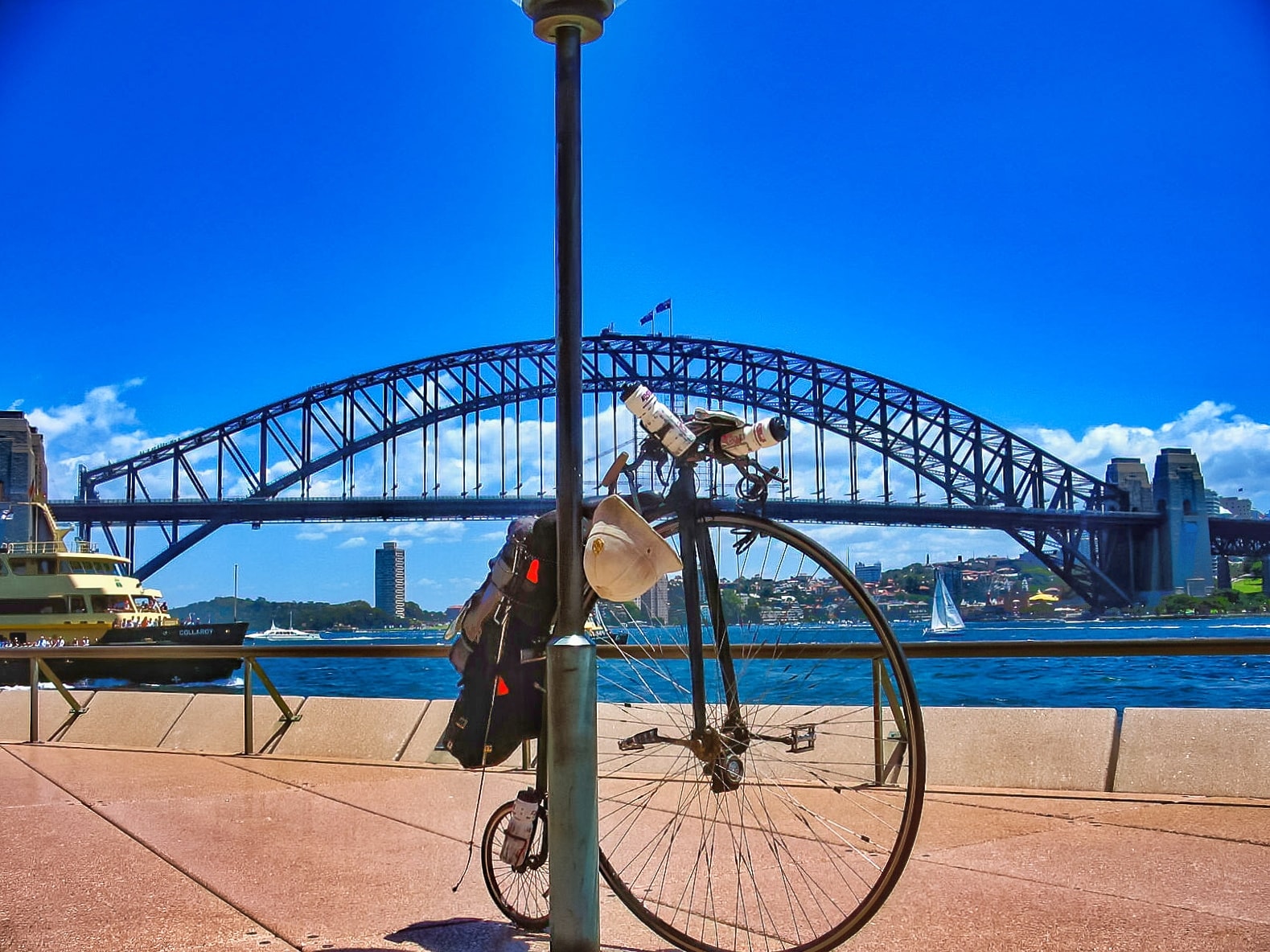 What specific modifications did you make to your penny for long-distance bikepacking?

Bike design-wise, it was about learning how to make the bike both strong and light. The only way to find this out was to get out there and put in the miles on a loaded bike. In 2000, I rode Lands End to John O’Groats [which is 1,100 miles from the southernmost point of England to the northernmost point of Scotland]. [That trip] was on my MK-2 version, which was about 32 pounds in weight.

The MK-2 was a lot easier to ride, and I gave it a good beating (until it broke). Luckily, I was able to make repairs using a couple of different farms’ welders as I went along.

Circumnavigating Iceland on a penny — what was that like?

Iceland is an incredible country. You constantly feel like you are on the set of “Game of Thrones” (of course, a lot of it was filmed there). The scenery is so diverse and beautiful.

The biggest challenge for the penny is the wind, and it does like to blow a gale in Iceland. You sit very upright and catch the full force if you’re riding into it. Crosswinds can also catch the wheel and steer you across the road. The gusting crosswinds in Iceland were particularly exciting.

Tell us about the build — and how you get on the bike in the first place.

The mounting peg sits above the rear wheel on the left, and as the name suggests [this] is how you get on and off the bike. Forks and bars are traditional [for a] penny-farthing, the bars being solid steel for strength.

Brake-wise, you only use them to moderate your speed when going down a hill. It’s bad news if you pull on them hard, as the rear wheel will lift off the ground and send you over the bars.

Bag-wise, the best configuration is to have two normal front panniers behind the saddle — with a tent squeezed between — a bar bag for cooking, and a small backpack for cameras.

Can you talk about the first bike you built?

My MK-1 penny was a bit of a beast. I took something that is very simple and made it far too complicated. The wheel I built around a Sturmey Archer three-speed hub, with leaf-spring suspension [and a] heavy steel frame — I built it like a tank. It weighed 76 pounds!

When I rode that bike to Paris, I also took far too much kit, so my weight was around 120 pounds. I learned a lot about traveling with a penny on that journey. 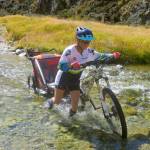 Yes, I Took My Babies Bikepacking. No, I'm Not Crazy.

Would you take your baby (and young child) on a multiday bikepacking trip? Our author and her husband did! This is how bikepacking with a baby and 3-year-old went for one brave couple. Read more…

Can you explain a little bit about how riding a penny-farthing is different than riding a traditional bike?

The main difference between riding a penny-farthing and a normal bike is efficiency. The penny has solid rubber tires, and you feel all the bumps, vibrations. I did fit the solid tires on a regular bike to get a direct comparison, and it felt like I was riding through syrup.

Pedaling uphill is also a bit of a problem, as you can’t stand up on the pedals and use your body weight. You have to [just] use your legs.

Also, because you sit very upright you do catch a headwind very badly, and you can’t really lean too far forward to get aero.

Was it difficult finding shops to help with parts and repairs along the way?

Nothing on my bike is standard except the saddle and pedals. So yeah, bike shops can’t help.

How many bikes have you built to date? Do you make the pennies all the same, or do you play around with the design?

In total, I’ve probably made around 60 bikes. I haven’t made any since 2014, but hopefully I’ll be back in production in 2021. Design-wise, I was up to [my fifth] model, and each new version came with incremental improvements. 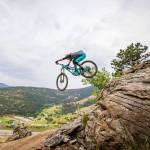 There’s this fantastic video on your YouTube channel: You’re riding downhill into Death Valley on your tour through the U.S., and you are perched on top of the bike with your legs and feet hooked over the bars. Can you explain why?

This is the safest way to go downhill. When you have [an] accident on a Penny it’s called a header. Essentially this is when you go forward and pivot over the bars, before hitting the deck. By putting your legs on top of the bars, the idea is that when you have your accident you start running in midair and land on your feet.

If you hang your legs down, it’s [also] uncomfortable, and then the spinning cranks are likely at some stage to crack you on the shins.

Steepest roads you’ve ridden on, and worst crash? Any injuries over the years?

The Himalayas were the steepest, worst conditions, and highest altitude at around (15,500 feet), and were the biggest challenge on all fronts. I had to push the bike up most of them but always rode down. Coming down the Oxy pass in Iceland was the only time that I’ve ever had to walk down a road.

My worst crash was in an indoor penny-farthing race in London. I came around a corner [and] took a splendid header, resulting in a fractured elbow and wrist. You tend to break your wrists first, then your elbows, then your teeth. I’ve only done my wrists and elbows — four times each.

Can you recall the coldest or hottest weather you’ve encountered on your World Tour?

In Tibet, I got stuck halfway up a pass in a sleet storm. In the tent to stay warm, I put on my dry clothes to camp that evening. The next morning I had to put back on all the wet clothes — I couldn’t take the risk of having nothing dry to wear in the tent the following evening.

As soon as I started to move, I was frozen. I rode for 10 minutes before I couldn’t grip the bars anymore, my hands were numb. After an hour or so of walking, I came across a tiny house [with] smoke coming out of a ramshackle chimney. [A] lovely family sat me down in front of the stove to dry me out.

For the hottest weather, heading down into southeastern Turkey, the heat was blowing up from the Syrian desert. I had been refilling my water from the springs along the way, [but on] this occasion there were none. Forty-degree-Celsius heat and I had run out of water — a big mistake. I tried sucking a small rock to help quench my thirst; I had read about this in an old survival book.

Where do you plan to travel next?

Ignoring COVID-19, I think a tour around Italy is long overdue.

Do you think penny-farthings will ever make a comeback?

They have made a comeback, though in a really small, niche way. There are now people making pennies all over the world, and it’s a big community that I am happy to be a part of.

“Modern penny-farthings” is exactly the term I am happy to go with — they take nothing away from the historic bikes, just share the enjoyment with a whole new generation. 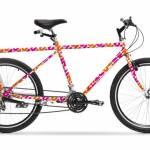 Here's Why That Dunkin' Donuts Tandem Bicycle Looks So, So Wrong

America may run on Dunkin', but it's certainly not going to bike on it. Read more…