Race to the top of a mountain, then huck cliffs for a high score on the way down. Red Bull Raid offers backcountry skiers and splitboarders a novel competition format.

“One minute to drop.” The words echo in my head. This is really happening. I just watched Red Bull athletes JT Holmes and Daron Rahlves absolutely fly off this cliff, and I’m supposed to drop in next.

'Bring the big sticks, leave the lycra at home!' Red bull just created a new freeride skiing format that has us drooling. Red Bull Raid scores athletes on the way up and down. Read more…

I had just completed half of the Red Bull Raid, and while the first part was mentally and physically exhausting, the drop-in terrified me.

The nuanced format intrigued me so much I had to take part.

Red Bull Raid is divided into two portions: uphill and downhill. Skiers and splitboarders are timed up a set course to the top of a mountain. Where you finish determines your score.

Then, after brief recuperation, the athletes must pick a line and send it down cliffs freeride style. Scoring for the second half of the comp is based on style, line, and control — like a freeride competition.

“The uphill builds camaraderie. That’s what makes it such a unique experience,” said Jessica Lisagor, second place finisher of the women’s skiing competition. “Looking over at all the other athletes, it felt sweet at the top.”

Anarchy on the Skin Track

A group of 30 skiers and snowboarders, men and women, clumped together at the start line. Red Bull Raid began with a mass start and a transition. 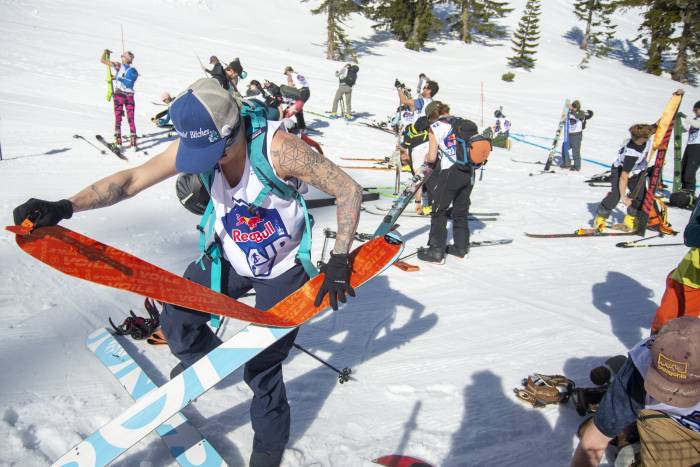 “GO!” shouted the announcer, and the pool of athletes rushed forward 10 feet to get into the transition zone. From here, I fumbled to take apart my board, strap my skins on, and clip in as fast as possible.

Before I knew it, I was slowly chugging my way up the skin track, a groomed run at Squaw Valley’s Silverado lift, head down, breathing hard.

My heart rate redlined immediately as I put my bindings into the highest setting they offered. For 20 minutes, this was pure thigh-burning hell.

Halfway up the climb, a skier to my right fell down and dropped a pole. Another splitboader tried to stop the pole, but it was too far from his reach. The pole tumbled down 10 feet — this would cost the skier.

A few minutes later, I heard a metal “ping!” from a splitboarder next to me. He had just popped out of his binding, and his boot broke through the toe piece. That sucks.

The top of the climb culminated in a very steep traverse that I had to sidehill and edge on to maintain traction. Ahead of me, a splitboarder lost grip and tumbled down the side of the mountain.

The climb finally leveled out for the final 200 yards, and I steadied my breathing for the last push. Just outside the track’s rope, I saw more than one puke stain.

Struggling for air, I reached the final transition zone and the top of the run. I had to strap my board together and collapse past the finish line to secure my place.

“Ninth! I’m pretty pleased with that!” I thought to myself.

“I’m buying Shifts,” I hear another athlete mutter — a reference to the Salomon Shift binding. This guy was in frame bindings.

The finish line was filled with the cacophony of coughing athletes struggling for air. Squaw Valley’s elevation — 7,500 feet — was doing a number on us.

The skin track was pure chaos, but behind me now. I’d never seen that much action skinning before.

Up top, a large Red Bull banner marked the start of the downhill area. The last skiers and snowboarders from heat one had just finished their descent, and now it was our turn.

We descended in the order we reached the top, so that meant I was ninth up.

Prior to the competition, athletes were given an hour of time to scope out the descent. We couldn’t go on the actual slope, but we could see it from the starting gate and across the valley. 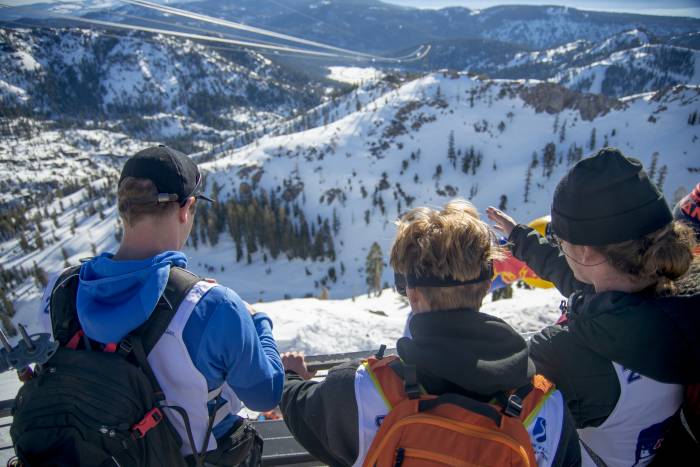 I picked out a line that I thought had a good mix of features and technical riding. From below, I thought my line looked doable.

“SKIER NUMBER 9!” I heard the announcer call out. I got in line with two athletes before me.

Standing at the start gate, I didn’t really know what to do with myself. Should I be stretching? Should I wave my arms around? Get loose? There wasn’t really enough time to warm up before the event started, and aside from the scoping session, this was my first run of the day. Talk about a warmup!

One by one, the athletes dropped into the course until it was my turn.

“ONE MINUTE TO DROP.” I heard the eerie words. Yeesh. No avoiding it now. I had my line picked out, and now it was time to perform.

I wanted to both yell and stay quiet. My body was full of incredible tension and emotion for one very long minute. I was staring directly at fear.

I tried to relax. It was time to execute.

The next moment was a blur.

I dropped in, cut right, and popped off the edge of a rock band. I got some air and felt good on the take-off. The landing — not so much. I dragged my butt almost immediately, cussing to myself. Damn. It’s over. I ruined any chance I had. Damnit.

Even on the nontechnical parts of the run, I struggled to hold an edge.

“I have to stick to my line,” I told myself midway down.

I veered to the right and approached signs that marked “cliffs” up ahead. The run was so steep, I couldn’t see past the marker. From here, the run really dropped downward. Damnit! It was too steep.

Time for the next drop. It was a double cliff band that was way too steep. I side-slipped down, struggled to maintain composure over the rocky lip, popped my board up just in time to escape the rocky edge, and thankfully landed on my feet after the drop. But it wasn’t pretty. I instinctively dropped to the ground to stop hurtling head over foot, slid on my butt for a few feet, then got on my feet and moseyed over to the finish gate.

“Wow. That kicked my ass. Jeez.” Freeride is no joke.

Sore and exhausted, I high-fived some of the other athletes, and overall, I’m pleased. After watching freeride competitions, wondering what they’re all about, Red Bull Raid finally gave me a shot to see if I could hang. I couldn’t. That’s OK.

I’m glad I stuck to my line and am content with my place on the uphill portion. While my freeride chops could use a lifetime of practice, I’m glad I left the competition with all my limbs intact. 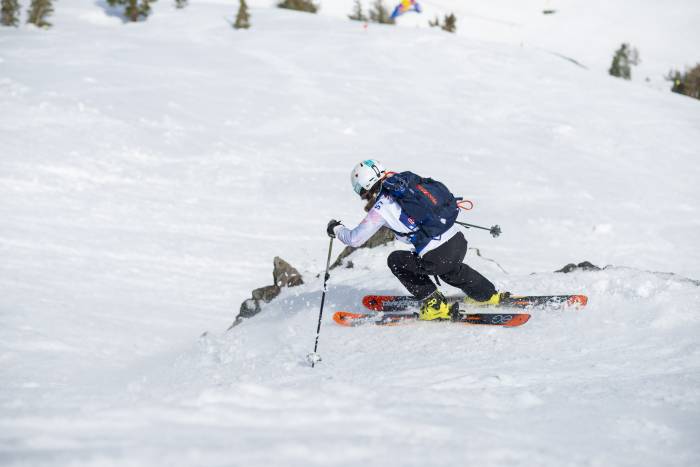 Red Bull has not made an official statement about the future of Red Bull Raid. From my perspective, the first event appeared to be a success.

The athletes were stoked on the format. And a decent group of spectators amassed at the top and bottom of the venue to watch. For an event open to the public at the end of the season, Red Bull Raid hosted 60 athletes.

With uphill and downhill portions of equal scoring weight, Red Bull Raid builds off the boon of backcountry skiing. As sales and technical innovations for the burgeoning sport rise, Red Bull Raid enters to offer athletes a competition.

Yet while the uphill portion may be doable for most athletes, if the Squaw Valley competition offers any foresight into future events, the freeride portion is not for everyone.

To be able to score remotely well on the downhill, skiers and splitboarders must have some serious riding chops. Time to start practicing.

Should Red Bull Raid happen next year, GearJunkie will be sure to update our readers with event details. Until then, check Red Bull’s site for more photo and video content from the event.

Up Next: Cactus the Dog Finishes Stunning Desert Ultramarathon, Wins the Internet