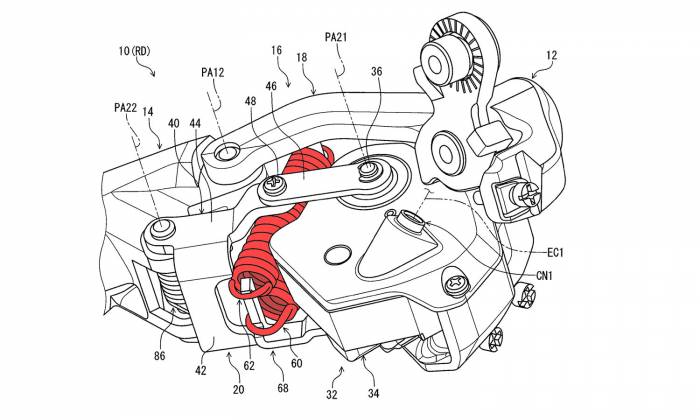 Shimano’s new system helps protect the most sensitive bits of the rear derailleur in an electronic shifting system. Springs protect the guts from the most damaging aspects of any impact in the ‘suspended’ structure.

Whether you kick up a rock on the trail or drop your bike at the wrong moment, Shimano aims to cover you with its new rear derailleur.

Once mounted on the bike, you’d be hard-pressed to spot the functional differences tucked inside. But by employing a second return spring and a couple of lever arms that tuck inside its parallelogram, this prototype Di2 derailleur can handle direct external strikes and impacts without damaging the sensitive motor and gearbox inside.

Let me start by saying that the 42 pages of vaguely descriptive, conceptual legalese in this patent filing are dense. And its 31 diagrammatic illustrations are undoubtedly helpful but by no means clear in their own right. If you could read through it and come away understanding it all on a first pass, you’d be much better than I.

But I popped a current Ultegra Di2 drivetrain beside my monitor and waded deep into the weeds to figure out what’s different and why it matters.

From the patent’s basic description, the key to this new Shimano Di2 derailleur concept is its ability to shift electronically just like you’ve come to expect but to use two springs within its linkage system that allow the derailleur to move out of the way whenever it’s hit from either side.

Doing so protects the most expensive and precise bits of the Di2 system — its motorized actuator and internal gearbox — while allowing it to return to center and shift accurately after impact.

The current Di2 design achieves somewhat similar impact protection and automatic return from an outer impact by driving shift via an inboard link and exposed spring that can slip past a small stop. But if you get something caught between the cassette/wheel and your derailleur, it requires a manual reset.

The new dynamic is more automatic and compact, enabling Shimano to tuck the mechanics inside the shifting parallelogram.

Upshift, and a new lever pulls the derailleur linkage outboard to align with a smaller cog via the first spring. Downshift, and that lever pushes the second “saver” lever to pull the opposite side of the derailleur linkage inboard via a second spring. Since the spring forces are much stronger than the force required to actuate the shift, everything should move quickly and precisely.

But since the parallelogram linkage is floating between the two springs, any more brutal force from either side will move the derailleur without damaging the gearbox or motor.

Interestingly, the same solution works for the front derailleur too.

Why Does It Matter?

We all know that you don’t want to replace an expensive electronic derailleur, so it’s always been nice that they all disengage when they suffer a significant impact.

This seems to make that disengaging mechanism more fluid while adding automatic recentering in both directions. We scratched our heads wondering why you need impact protection from both sides. But it’s certainly conceivable that a rock flying up off the rear wheel could strike the inside of your derailleur, or something could get jammed between the cassette and derailleur body when riding on gravel or off road.

In any case, the inherent floating design allows for movement and impact protection in both directions.

Now, the question remains: When will production begin?

It’s only been a year and a half since DURA-ACE and ULTEGRA got their latest Di2 update (and just a half-year since 105 Di2), so we don’t expect a new road Di2 group anytime soon. It has been almost 4 years since gravel’s GRX Di2 debut, though.

We’ve been waiting anxiously for a new XTR Di2 group since XT got an e-bike-only Di2 last summer. And it’s been almost 9 years since the current XTR Di2 M9050 groupset was revealed. 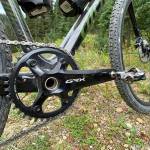 Whether evaluating a new bike or planning to upgrade one you already own, you'll need to understand the various component specs. Read more…