The latest staple outdoor company to announce massive layoffs: one of the U.S.’s biggest names in bicycles and bike gear. In a brief press release Wednesday, Specialized announced major cuts.

“Over the last three years, the industry has changed at an incredible pace and shown that cycling is more powerful than ever,” the release begins.

Then it states the company is releasing 8% of its workers worldwide.

The California-based bike, component, and clothing manufacturer employed 1,500 people as of 2016, according to the most recently-available unofficial statistics.

Specialized said in the release that the layoffs amounted to an effort to adapt to the shifting — and growing — cycling industry landscape. They occurred a month after the brand terminated its entire ambassador program, a move that blindsided many athletes under the Specialized umbrella. 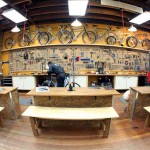