The Submerge submersible wallet and cardholder have generated a big wave of support. What’s the fuss about?

Meet the wallet (and cardholder) that’s built to withstand the ocean. Surfer Ronan Finnegan developed the Submerge wallet, which is waterproof up to 3 m, to solve his own problem. Sick of soggy wallets and sandy credit cards, Finnegan painstakingly designed a two-part waterproof organizer over the course of a year.

The project hit the ground running on Kickstarter, where it has accrued more than $50K in funding with 15 days to go in the campaign. The project’s initial target was $5K.

All that, and it’s not even big enough to carry most smartphones. So, what’s the secret to its success? 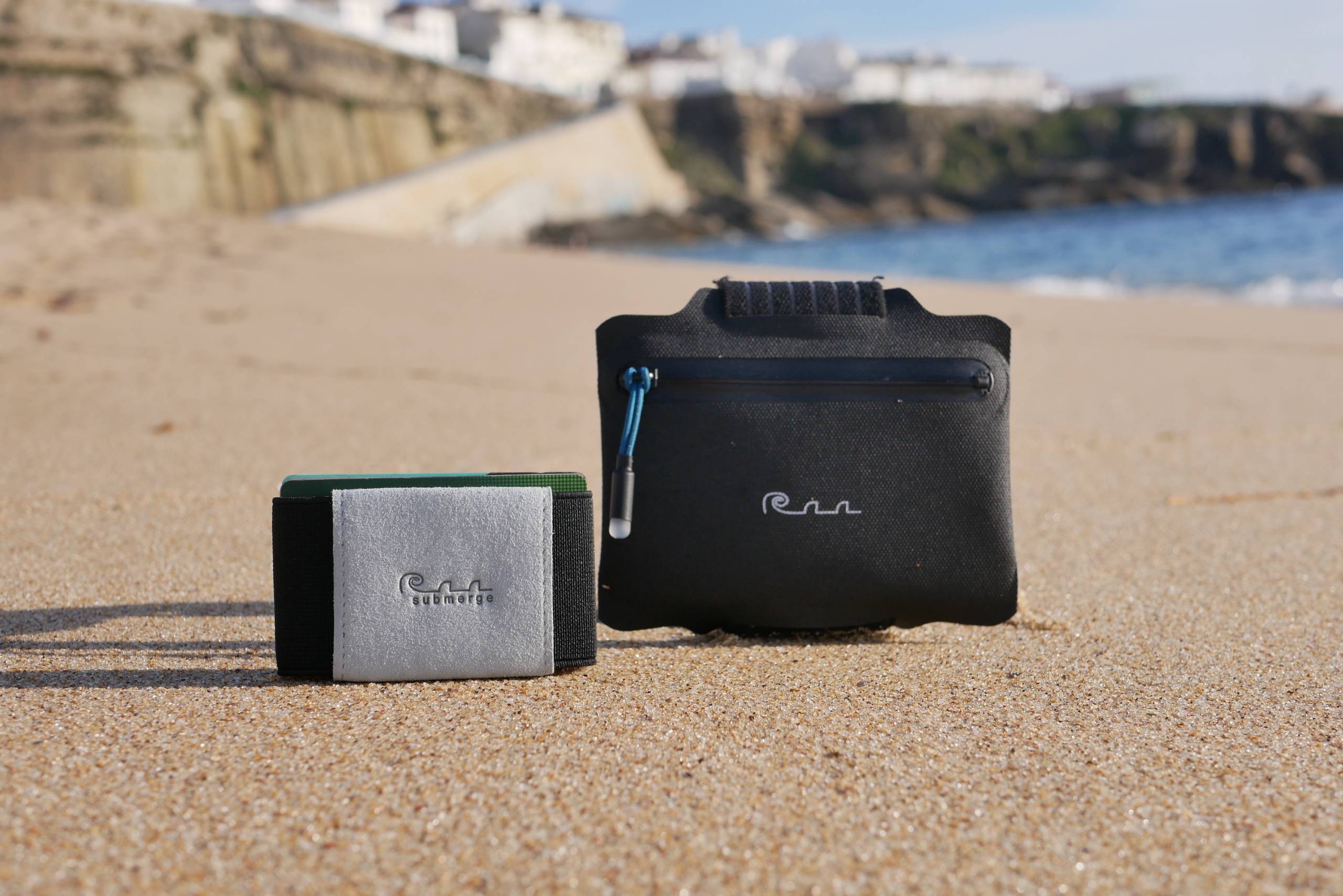 Why the Submerge Wallet?

Securing valuables is always an issue at the beach. Either you stash your cards and keys in some awkward place, like under a hat or a shirt, or you go the surf rat route and bury them in the sand.

According to Finnegan, he developed the Submerge project once he got tired of the sandy runaround. “Traditional wallets aren’t designed to be carried in the ocean or exposed to the elements,” he explained in a promo video. “[And] I was fed up with leaving my valuables buried in the sand.”

Enter the Submerge. After a year of design scrutiny, the waterproof wallet will now become a reality. 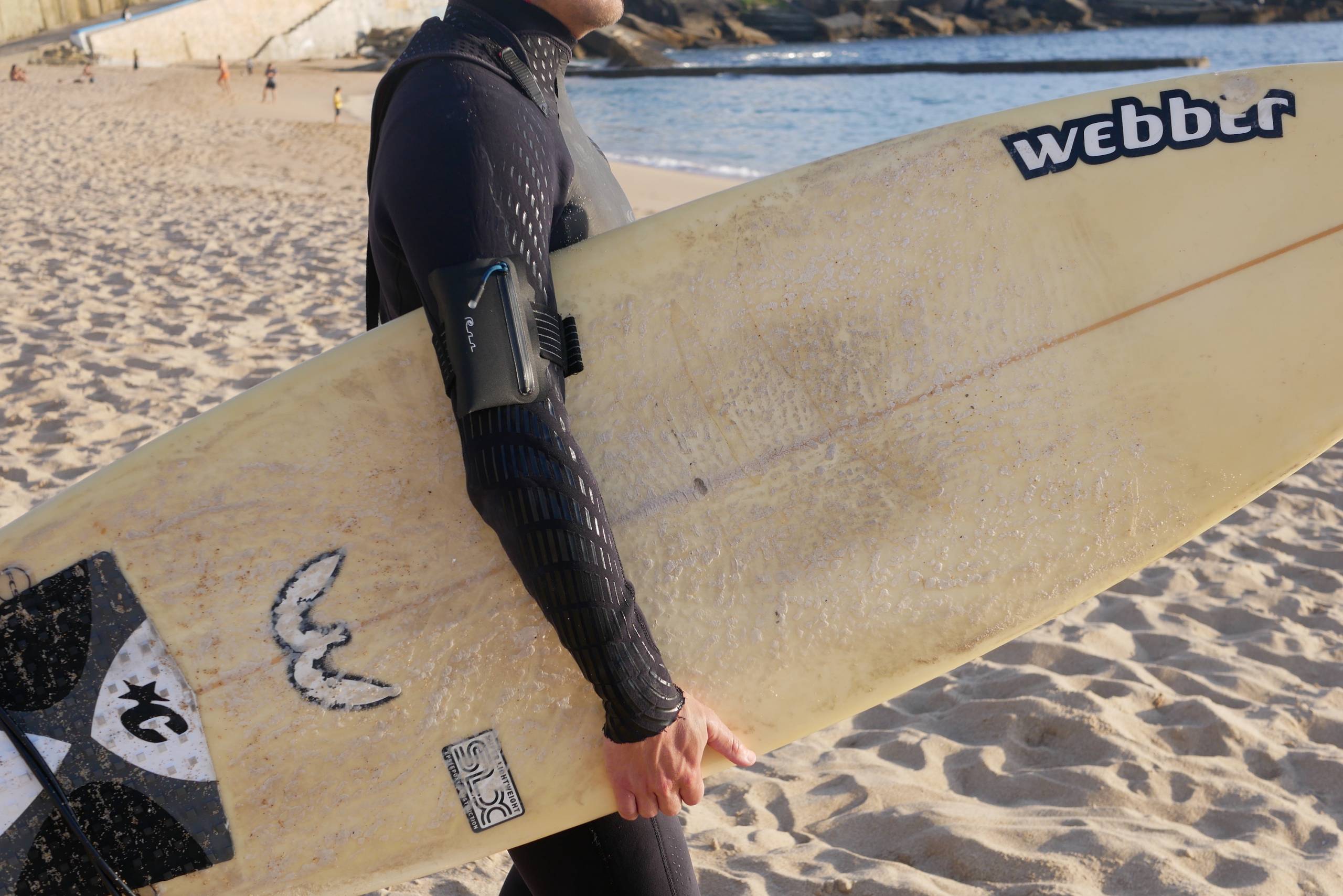 The Clark family set out to create a board that would allow others to create and share memories with friends and family on the water. As a result, TANDM Surf was born. Read more…

The Submerge is, in many ways, a simple concept. The inner component is the three-pocket organizer, which holds up to 10 cards. It has sleeves on each side to secure cash, coins, or keys and displays a popular minimalist design you’ve probably seen a lot of lately.

The wallet’s differentiating factor is its external shell. It’s a compact TPU pouch (measuring 4″ x 5″), with an airtight, waterproof zipper and heat-sealed seams.

There are two options for securing it: either a carabiner or an elastic Velcro strap. The strap keeps it tight to the user’s body for any activity. Worn on the arm or thigh over a wetsuit, it looks discreet and low-profile.

Submerge specifies IPX8 status, claiming waterproof capability to 3 m. Certified testing labs rate products IPX8 if they can be submerged at 3 m for 30 minutes without significant damage to the interior components.

Finnegan says the TPU in Submerge wallets is biodegradable. Most modern TPU materials can, in fact, biodegrade within 3 to 5 years. Yes, TPU is a petroleum product, but keep in mind that the things you use become more planet-friendly each time you reuse them.

In some ways, the Submerge wallet’s story arc is aspirational — it’s a genuine passion project with a high ceiling for long-term utility. Funded to 1,000%, estimated delivery starts this month.

Surfers, kayakers, canoeists, swimmers, paddleboarders, lazy river enthusiasts, and more can all still get in on the funding fun at the Kickstarter page through July 26. The wallet and cardholder bundle retail for $85, but early-bird backers could get the kit for $54.

Get ready to rep your home team at the Olympics with The North Face's International Collection athlete-inspired apparel. Read more…

Up Next: Bear Spray Recall: SABRE Warns Frontiersman Canister May Not Discharge