Remember the Chinook? The badass sunset-themed Hilux popup fueled adventure addicts back when van life was young. Now, Toyota re-introduces the concept at the Las Vegas SEMA trade show with the Tacoma-based ‘Tacozilla.’

“The build we’re doing right now freaks me out.” That’s what Marty Schwerter, the team manager for Toyota’s new “Tacozilla” project, had to say about the concept.

Based on the famous 1970s camper collab between Toyota and Chinook, the new Tacoma-based iteration will debut at this year’s SEMA auto aftermarket trade show in Las Vegas. Marketing whizzes at Yota dreamed it up, then tasked Schwerter’s team to pull it off. The build is based on a 2021 Tacoma TRD Sport — true to ’70s form, the truck has a stick shift.

From the color splashes to the form factor, the Tacozilla will ape the Chinook in appearance and intent. But it also updates the old platform for the needs of evolved van lifers — rounded edges and a shortened rear approach angle help it compete with current designs. 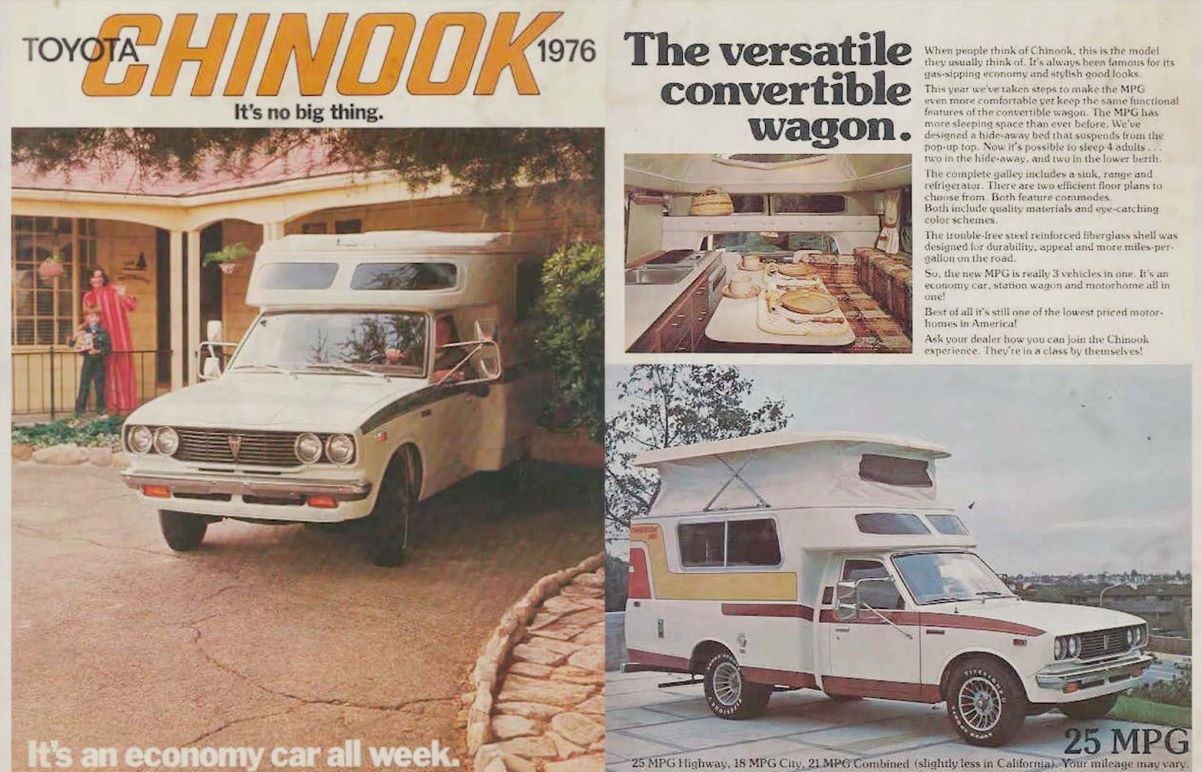 Due to the project’s retro roots, the Taco that Schwerter’s team will use is significantly smaller than most modern campers.

“Some of the big challenges are going to [involve downsizing] everything,” he said. “Motorhomes are built to [let] someone 6’2″ walk nose to tail, be able to cook, and have a couch. We’re so space-limited that finding things we can package inside is going to be a challenge on its own.”

The vast majority (or all?) of the campers marketed today might be bigger than the Tacozilla, but that doesn’t mean it won’t turn heads. The graphics and shapes alone should set it apart. And unlike the Chinook, it won’t feature a popup. Instead, it’s a uniform-height hardshell that should, at least according to early renderings, stand tall among most rooftop lines.

Speaking of renderings, they’re about the only parts of the Tacozilla that currently exist (at least according to the brand). Less than 2 weeks out from SEMA, at the Las Vegas Convention Center from Nov. 2 to 5, Toyota’s only shown us the ‘Zilla’s stripped-down Taco platform.

What can we look forward to from the build? Tease yourself with the YouTube video all you want for now; you’ll have to road-trip it to Vegas to know for sure.

Saving…
Harvey Lewis Breaks ‘Backyard Ultra’ World Record, Runs 354 Miles in 3.5 Days
Dug Up in the Desert: Buy This Ancient Mountain Bike and You’ll Own Its Patent Too
×