Public lands continue to face serious hurdles, especially when it comes to federal leadership, the necessity for public input, and protecting certain landscapes from resource extraction.

It certainly looks like creeping incrementalism towards chaos for our 640 million acres. Here’s a breakdown of the three most recent threats our federal lands currently face.

“The Founding Fathers intended all lands owned by the federal government to be sold,” wrote Pendley in a 2016 op-ed in the National Review. The article is a detailed broad swath statement of how “Westerners” agree that our federal land holdings be liquidated to the highest bidder. For the record, this Westerner disagrees with his take on our founders’ vision. But this same man who doesn’t believe in public lands is now leading the largest public land agency in the nation.

Bereau of Land Management (BLM) land is, from my take, our most extreme case of multiple-use land. If you can do it on public land, you can do it on BLM land. And these 245 million acres (not to mention the 700 million acres of publicly owned mineral rights) are a boon for economic profit on behalf of the American people.

BLM lands generated nearly $3 billion in oil and gas lease profits in 2018, and that’s just a small piece of the $88 billion that these lands generate in total. Recreation, grazing fees, timber, non-energy minerals, coal, and renewable energy not only generate substantial income on behalf of the American taxpayer, but they also provide 374,000 jobs for the American people.

This is not simply a wide swath of acreage that sits quietly; it’s a public powerhouse within the American economy. And its management and policy decisions are currently in the hands of an anti-public lands zealot who also happens to be involved in cases litigating against the federal government on behalf of oil and gas companies. It’s a little bit mind-blowing — and a lot alarming.

This one is a bit tricky, but hear me out. In June, the United States Forest Service announced that it would likely cut back on up to 93 percent of its public comment periods for infrastructure projects on public lands. This means that — where there typically is a period for public comment on, say, a new logging road or a potential pipeline — the public will no longer know that the project even exists.

The public will not be able to weigh in. This is an attempt to restructure our National Environmental Policy Act (NEPA), which acts as a public check-and-balance for federal projects and all private projects on public land that receive federal funding.

The goal is to streamline processes that can often get held up in bureaucratic red tape. But an awful lot rests just beneath the shiny veneer of a streamlined process. Not only is it eliminating a broad scope of public comment, but it’s also removing inventoried roadless areas and potential wilderness areas from NEPA’s purview. This could be disastrous to the few wild and undeveloped spaces left within our public lands.

The public comment period on this only goes until August 12. So give your input if you still can. If these changes do end up going through in August of 2020, we’ll lose much of our ability to comment of a wide swath of projects that involve not only our public lands but also our taxpayer dollars. 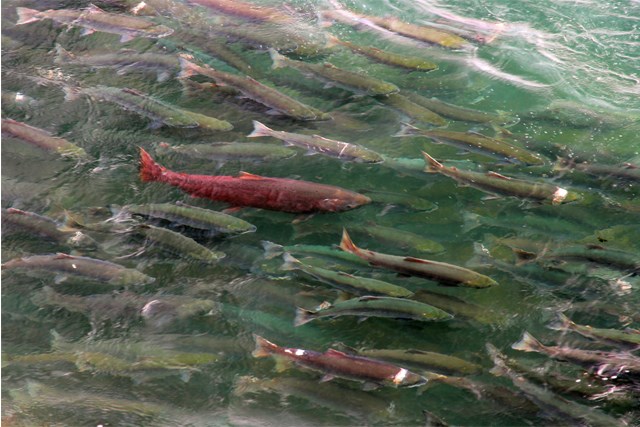 If you eat salmon, you’ve likely eaten salmon that comes from Bristol Bay. It’s a vital fishery not only to the Alaskan economy but to the Alaskan ecosystem. Just this past season, 42 million salmon came out of this fishery for consumption. It holds all five species of Pacific salmon, is responsible for 46 percent of the world’s sockeye harvest, creates $1.5 billion in revenue, and supports 20,000 jobs in Alaska.

Not surprisingly, this land is also fertile in minerals. And the proposed Pebble Mine seeks to dig in. Just the construction of the open-pit gold and copper mine would affect 94 miles of salmon streams and 5,350 acres of wetlands, lakes, and ponds. And that’s not even with the consideration of a potential environmental disaster.

Interestingly enough, as recently as January of 2018, EPA administrator Scott Pruitt stood up for Bristol Bay. “It is my judgment at this time that any mining projects in the region likely pose a risk to the abundant natural resources that exist there. Until we know the full extent of that risk, those natural resources and world-class fisheries deserve the utmost protection,” Pruitt said.

And yet, the administration is now singing a different tune. And that tune involves last week’s revocation of Obama-era protections and streamlining the process for permitting the mine through the Army Corps of Engineers. The thing is, we’ve already put considerable resources into researching the potentially disastrous effects of this mine for more than 3 years.

The research bears out inevitable negative consequences. Our government moved to protect Bristol Bay at the specific request of over 1 million people who commented publicly against the proposal. But they’ve now withdrawn that protection. The permitting process continues.

Final Thoughts: Dismantling the System From the Inside Out

It’s difficult to look at all these things and not have a rising sense of alarm that something larger and looming is going into effect.

These moves are a continued contrast to President Donald Trump’s stated advocacy for keeping public lands public. And that contrast includes stripping millions of acres of public land from protections, giving the finger to our public waters, putting the world’s largest salmon fishery at risk, opening up a pristine Alaskan refuge to drilling (with millions of Alaskan acres already available), restricting public comment, and putting an anti-public lands zealot into a deeply influential management position at the BLM, among other things.

It’s disconcerting, but public lands are always facing threats of one kind or another. And they likely will into perpetuity. It’s a clear sign that the resources are not only vital but deeply profitable. And keeping them in trust for the American people is a hell of a heritage to hold onto.

And as the landowners of both these lands and mineral rights as well as active citizens within a functioning democracy, I’d encourage you to keep in touch with your representatives — with every and any opinion you have on these matters.