In episode one of this series, legendary rider Danny MacAskill revisits a location from his epic San Francisco street edit.

Have you seen Danny MacAskill’s “Postcard From San Francisco” video? If not, stop what you’re doing and go watch it.

Once you’ve picked your jaw up off the floor, you might be interested in getting a glimpse of how that bicycle wizardry came together. That’s exactly what you’ll get with “Back of the Postcard’s” first episode, Redemption.

MacAskill’s “Postcard” video was set to begin shooting in 2017, but he fractured his kneecap on day two of filming. In this video, the Scot revisits the scene for a second shot at the trick that sidelined him. Does he nail it this time?

He’s Danny MacAskill. What do you think? 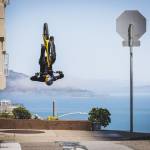 The day Danny MacAskill dropped his San Francisco video, he set aside some time to answer every question we could throw at him. Read more…