The North Star is located on the Colville Indian Reservation. It’s what is called a consolidated reservation and the tribes are known collectively as the Colville Consolidated Confederated Tribes.

I do this 90 percent for the money, 10 percent for the adventure, and zero for altruism. At 112 hours per week, it’s a lot of money, no matter your hourly rate. I go out as the guy responsible for gathering EMTs, paramedics and supplies; assigning them to crews that are actually fighting the fire; and establishing and running a base camp clinic.

Occasionally I go out with crews on the fire and stomp around, see flames, and throw dirt around. I enjoy that. But if I have multiple crews working in different directions, then I have to sit in one central location so I can be deployed to whoever needs help. 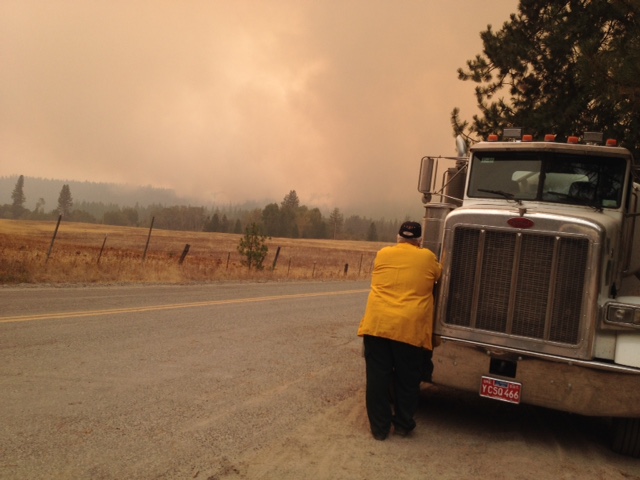 I guess these fires are making the news because I’m getting lots of queries and lots of reminders to “be safe.”

I’m safe. I’m mostly in base camp. We’re kind of expecting the fire to come right through camp, but we are on a huge dirt patch with a cinder block community center building. The media is probably making it a lot more exciting and dangerous than it is.

A couple days ago when I was with a crew, I did get kind of concerned. We were surrounded by fire — several miles away — but there was a strong wind blowing it directly toward us.

I expressed my concern several times, as did a few others, and to their credit, we stayed in a safe area until we really knew what was going on with the weather and the fire. Disengaging is always an option. The fire never needs to get extinguished.

Refusing an assignment over concerns of safety is not only allowed, but encouraged at every morning briefing. There’s even a protocol for it. Anyway, I feel that I am very safe and I’m impressed with management.

So far, nine days or so into this fire, not one structure has been lost and we haven’t had one injury. On this fire at least. That’s a damned good record. 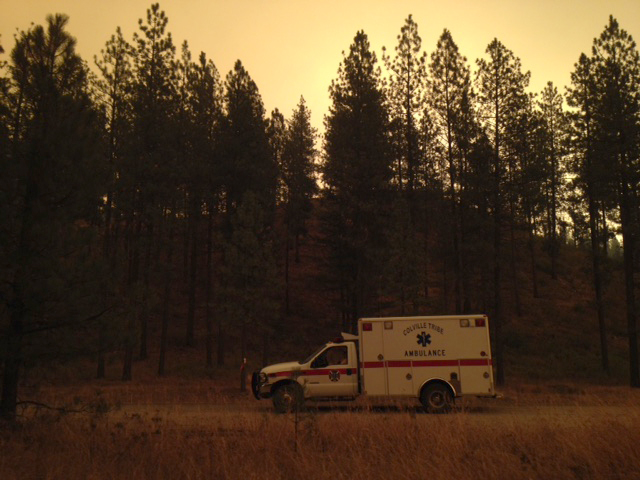 This is a really dangerous fire because of the terrain and the bone-dry fuel in abundance. In this case they are digging, bulldozing, and burning lines far from the flames so when the fire gets to the fireline, hopefully the lines will hold and the fire will just stop.

They’ve spent a ton of time digging and bulldozing a line around every home that is out there in the woods.

Just hot, hard, grimy, unglamorous work. Doesn’t make for good media, especially since no homes have been lost. And if we do lose some homes, given that they are not very photogenic starter castles, I doubt if North Star will make the news.

My house got caught in a fire in Old Snowmass, Colorado, on my birthday in 2003.

But to be honest, I typically don’t really care if a forest burns down or if some soulless subdivision burns up. If somebody builds themselves a cabin in the woods and it goes up…oh well.

I was on a fire in Idaho in 2012, and some senator or congressman or something was trying hard to push the fire bosses to work harder to save his cabin. The Halstead was a super dangerous fire — lots of beetle kill in extremely rough terrain, and mostly firefighters were digging line a long way from the actual flames so as to not kill any firefighters.

But this guy seemed to feel that risking lives to save his cabin was warranted. He literally cared more about his cabin than he cared about lives. Anyway, the fire bosses didn’t respond to his request. I never followed up to see if his cabin got toasted. 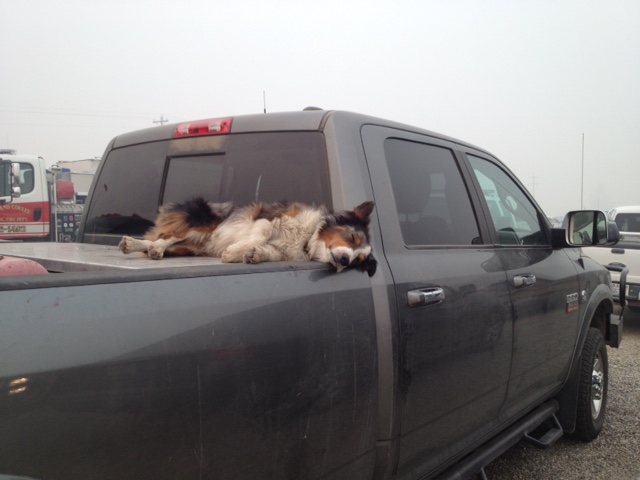 But I have to say, this fire is different for me. Part of it is the three firefighters that got killed in the next fire over, the Twisp Fire. That kind of put things in perspective. How unnecessary is that? It’s just trees and houses. The media is reporting that the winds changed unexpectedly. Winds always change on a fire. How could a firefighter not expect that?

But more than that it’s the people here. By appearances, this is an impoverished area. But these folks have been here for generations, and this is their homeland. Their homes are single- and double-wides; there are HUD homes, junk cars everywhere and family cemeteries out back. They live in the same house that they used to visit their grandparents in. 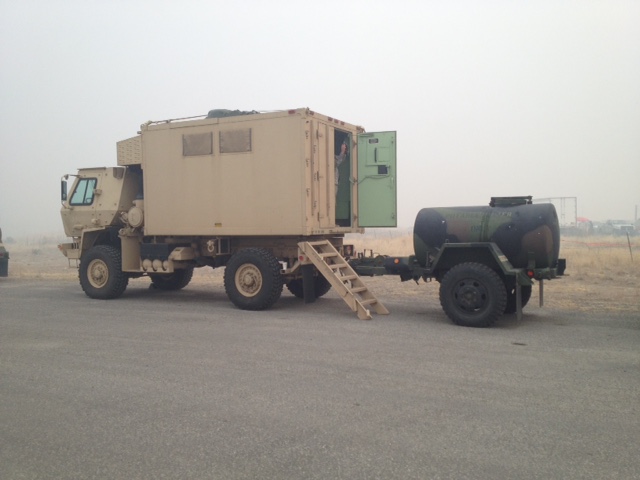 But in addition, these are hands-down the nicest people I have ever met. They keep thanking those of us in base camp and God-blessing us as though we’re the ones actually saving their homes. Some are local Natives Americans. Some are whites from the much better-appointed town of Coulee Dam, 15 miles back down the road.

It’s not uncommon on a fire to have locals drop off cookies and socks and a few other things that, honestly, we never need.  But this has been over the top. 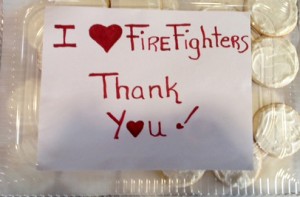 They’ve netted wild salmon out of the Columbia, cooked it up, and served it to us. They’ve made many pounds of plain fry bread and fry bread stuffed with meat. They drove six hours to Spokane and back to buy pounds and pounds of lemons, and are out front as I write this, making and serving lemonade.

They have coffee ready to go when I get in at 5:30 a.m. They have hundreds of brand-new undershirts, underpants, towels, wash clothes, more socks, homemade cookies of every kind you can think of, hot spaghetti and meatballs, fresh fruit, watermelon from their gardens, bottles of water, more socks, handkerchiefs, tampons, skin cream, chapstick, even tents.

Hell, I don’t even know what else. Honestly, we don’t need any of this stuff.

But they did bring us some stuff the firefighters actually need. I came in this morning and wondered out loud who made the coffee so early and this voice answered, “I did.” Glo introduced herself as one of the volunteers from Coulee Dam. She asked if there was anything I needed, as she had collected over $2,000 in donated money and had more coming in today.

So yeah, I need a shit load, but she’d have to go all the way to Moses Lake or Spokane to get it. She said, “No problem. Make me a list.”

So I made her a list. A long and expensive one. This morning. This afternoon, she and several other volunteers showed up with almost everything I asked for, in quantities larger then I asked. Turns out I’m not the only fire guy trying to get stuff and she told me that the Walmarts and Walgreens had been cleaned out of several supplies that I really wanted. But no problem. They had gone online to Amazon and were having the missing items delivered tomorrow. Tomorrow! I love it! Citizens getting done what the government can’t.

No Relief From Smoke

There’s no relief at all from the smoke. To get here, I drove in smoke, sometimes quite thick, for 12 hours or so. I haven’t had many respiratory issues yet with firefighters or base campers, but I’m anticipating them and I’m stocked up on Albuterol inhalers. And as always, I’m maintaining my certification as a world-class blister guy.

It’s been an extraordinarily light fire year nationwide, but crazy in Alaska early on and lately in Northern California and the Pacific Northwest. It probably sounds like the entire Northwest is in flames, but it isn’t. There’s a lot of forest up here. The fire season is something like 75 days longer than it was 20 years ago. Something like that anyway. This fire and the fire just west of us — the Tunk Block — may merge within the next day or two.

Anyway, that’s the North Star from my perspective. Probably not as exciting as what is displayed in the media. If you’re interested in following fires, how much they’ve grown, how much has been spent, what’s going on in the rest of the country, here are the two definitive sites: National Interagency Coordination Center and InciWeb.

Now we are the No. 1 priority fire. That means we are finally getting resources. We are getting lots of Army and Air Force medics that are not trained to actually be on a fire. We have a couple huge military trucks that do nothing at all except haul around these 100-gallons tanks of potable water. We have absolutely zero need for potable water. Every fire, including this one, has bazillions of pallets of bottled water and Gatorade.

Now there are also federal staffers in place who can go out and buy me the stuff I need to run a medical unit. Except these awesome civilians already bought me enough supplies for about 10 years. We also now have qualified civilian firefighters and aircraft. So life is good. We do now have boots on the ground, as they say. I think we’re going to get out of this one without burning down a single home. That would be good.

–Wayne Hare is a member of the High Country News board of directors. He lives in Grand Junction, Colorado, and is a part-time contract firefighter. This article originally appeared in High Country News, HCN.org.

Up Next: Cannondale Recalls 23,000 Mountain Bikes