The Tour Divide is an epic race covering the length of Great Divide Mountain Bike Route from Banff to New Mexico — about 2,745 miles. So keeping track of goings-on is tricky. But according to a few Facebook and Twitter posts from racers, the late-season snow has made this Tour Divide one of the most difficult on record.

After a very fast start with both men’s and women’s records at risk, the leaders encountered waist-deep snow and blizzard conditions going over the early mountain passes in Colorado. Following dangerous overnight bivys and sketchy descents, men’s leader Sofiane Sehili has dropped from the race, and Mike Hall’s record is most likely safe. But Lael Wilcox is still hunting down her own individual time trial record set in 2015. It should be an interesting week as unseasonable weather continues to roll in. Keep track of the race here. 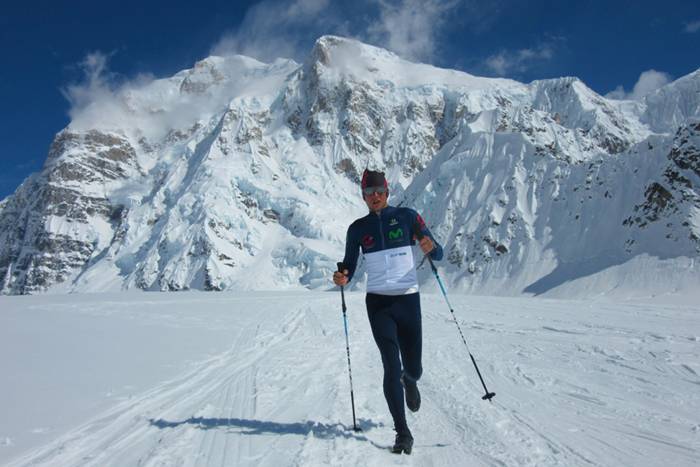 It’s time to add the name Karl Egloff to your lexicon. The Ecuadorian-Swiss alpinist just bested Kilian Jornet’s 2014 record up and down Denali (formerly known as Mount McKinley) by 2 minutes. Egloff climbed up and down North America’s highest peak (20,310 feet) in 11 hours and 44 minutes.

Incredibly, Egloff broke Jornet’s record while descending without skis; Jornet used skis for a much faster descent. Jornet congratulated Egloff for his accomplishment on Twitter. And while he may not be well-known in North America, it’s time for the world to take note. Egloff holds speed climbing records on Mount Elbrus in Russia, Aconcagua in Argentina, Kilimanjaro in Tanzania, and a lot more. Read the full account of this incredible climb.

Everyone knows the oceans are heavily polluted with plastic. But last week, a group of divers in Florida showed that action can make an impact, even if it’s small. More than 600 divers swarmed the waters of Deerfield Beach International Fishing Pier on June 15 to remove as much as 3,200 pounds of marine trash. Let’s all tip our hat to the effort and take 10 minutes to pick up trash in our own neighborhoods today in their honor! See the full details here.

Why did the bear cross the road? To halt the Leadville Trail Marathon, obviously. At least last week, when this scenario actually played out in Colorado. A black bear crossing the road temporarily halted the race between miles 12 and 13. Runners on the course captured an awesome picture of the moment. Check it out on Runner’s World.

Paul Tierney broke the record time for running all 214 of Alfred Wainwright’s Lake District peaks in one go. Tierney, a runner for inov-8, completed the 318-mile challenge with 118,000 feet (36,000 m) of elevation gain — the equivalent of four times up and down Mount Everest — in 6 days, 6 hours, and 5 minutes. He beat the previous record, set by Steve Birkinshaw in 2014, by almost 7 hours. “The hardest bit was definitely the lack of sleep. I think I averaged just 2 hours of sleep in every 24 hours,” he said.

Colorado is having an epic whitewater season. And while that’s music to the ears of paddlers across the state, the huge runoff has also taken five lives already this year. Two women died on Friday on the Gunnison River in separate accidents, highlighting the significant danger the big spring runoff brings. Forecasters warn that peak runoff could continue into July. The Colorado Sun has more details.