The Nepalese airline helped remove more than 2,500 pounds of garbage off Everest on the first day of this year-long effort. 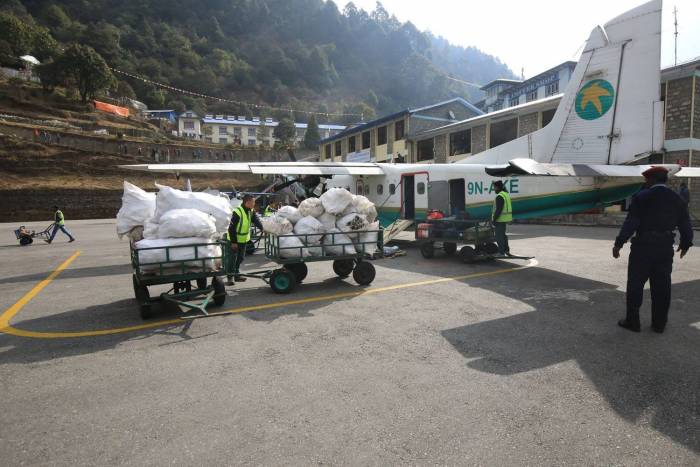 Despite its iconic stature, Mount Everest is covered with trash. Thousands of people have summited its mighty slopes, and even more have attempted but failed. And despite mountaineers’ reverence for that place, they’ve left behind their own small mountains of garbage.

So over the weekend, Yeti Airlines – one of the preeminent carriers in the Everest region – announced an ambitious initiative to haul out 200,000 pounds of trash by the end of 2018.

It takes a lot to get up Everest’s 29,029-foot peak: a lot of stamina and a lot of gear. Climbers leave things like spent O2 tanks, overpacked rations, and tattered tents in their wakes.

In fact, the volume of refuse is so great, Yeti’s “Everest Clean-Up Campaign” – and its 200,000-pound goal – will primarily focus on hauling out recyclable items. According to the New York Times, since its launch on March 17, the effort has removed about 12 tons of rubbish from Everest.

Garbage will be collected by porters using yaks to pack it out. The refuse will then go to Lukla Airport, and Yeti will then fly it to Kahtmandu for recycling, according to Al Jazeera. For context, it’s about 40 miles between Everest Base Camp and Lukla Airport. That requires days of hiking and hauling trash.

Yeti’s massive clean-up effort represents a partnership of several agencies in the region. The United Nations Development Program (UNDP) Nepal chapter, the Sagarmatha Pollution Control Committee, Blue Waste to Value, the Himalaya Club, and the Khumbu Pasanglhamu Rural Municipality, and local governments are all pitching in with workers and support.

Sherpas have long borne the responsibility of collecting waste from the world’s tallest mountain. We love seeing this joint effort to reach the monumental goal of making Everest clean again!

Up Next: Man Sets Vertical Record by Skiing Up 61K Feet in 24 Hours