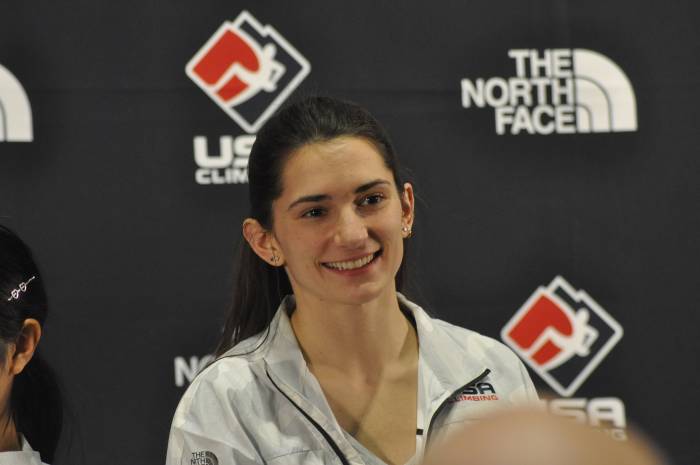 This weekend, young stars in the competition scene lit up the front range at the YETI Climbing National Championships. One shined brighter than all the rest.

The three-discipline, USA Climbing-sanctioned slate fostered some surprise winners and some podium finishes by favorites. However, nobody stood out from the pack as strongly as 15-year-old Anastasia Sanders.

The Fort Worth, Texas, native captured both the Boulder and Lead women’s titles, racking up more tops and zones than anyone else in the Boulder field and eking out a narrow win in points on the Lead route.

On the men’s side, Bailey enjoyed a similarly solid performance. The Seattleite proved to be the only climber who could top the men’s Lead route, winning the event over Jesse Grupper in second place. Bailey also scored well in the Boulder competition but succumbed to Dillon “Bob” Countryman. The 16-year-old matched Bailey with three zones and two tops on the day but needed fewer attempts to do it.

The drama at the top of the women’s Lead pile put a decisive exclamation point on the weekend’s events. The huge 50-foot, 45-point route made for a stiff challenge as woman after woman in the 26-climber field got stuck in the 30-point range. (Scoring at the event followed International Federation of Sport Climbing rules and the time limit was 6 minutes.)

Nineteen-year-old Quinn Mason held her ground at the top of the table with 38 points and one climber left to go: Sanders. According to Gripped, Sanders started to pick her way up the route in her “typical slow and methodical style.”

But her supporters knew she needed to cover ground fast, and they started urging her on as the clock ran down. With 15 seconds left, Gripped said, she tagged the 38th hold on the route to match Mason, and then fell.

Because Sanders had edged out Mason in the previous Lead semi-final, the effort won her the championship (the same reason Cloe Coscoy took second place from Mira Capicchioni in women’s Boulder, despite an identical finals score).

In Speed climbing, Callie Close distanced herself from Piper Kelly in the women’s final to win by almost a second and a half. And Samuel Watson beat Merritt Ernsberger on the men’s side by an even wider margin of over two and a half seconds. 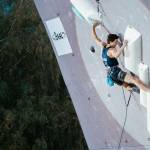 The fourth entry in the IFSC Lead World Cup series went off with a bang in Briançon, France, over the weekend. Read more…