At camp, 11-year-old Memory makes breakfast. And Dove, 16, makes dinner for the entire family. On the trail, Filia, 7, carries all of the family’s trash. Meet the Crawfords: An eclectic and determined family trekking the Appalachian Trail. 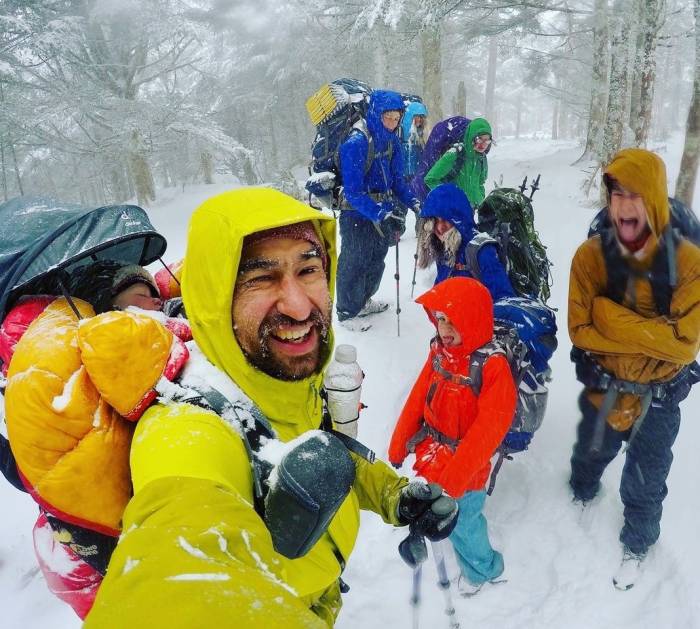 On March 1, 2018, Ben and Kami Crawford from northern Kentucky stood on top of Springer Mountain in Georgia with their six children, ages 2 to 16. They set their eyes on a destination 2,190 miles away.

They were determined to trek from northern Georgia to Mount Katahdin in Baxter State Park, Maine, the northern terminus of the Appalachian Trail. As far as anyone knows, they are the largest family to ever attempt this feat together.

Now, they are less than 150 miles from the terminus with a goal to finish before August 9.

Crawfords on the Trail

When I heard of their trek, I couldn’t help but reach out to offer encouragement, praise, and what many thru-hikers love most: showers, rides, and food. A few weeks ago, I had the opportunity to “trail magic” the Crawfords near my hometown in Central Vermont.

Over the course of two days, we shared a steak dinner in a parking lot for Ben’s birthday, a formal dinner at a local pub, two nights together in a trail hostel, and 25 miles of hiking across the start of New Hampshire’s rugged White Mountains.

While there was no time for a formal sit-down interview, there was plenty of conversation about what drives them to work toward their lofty goal. 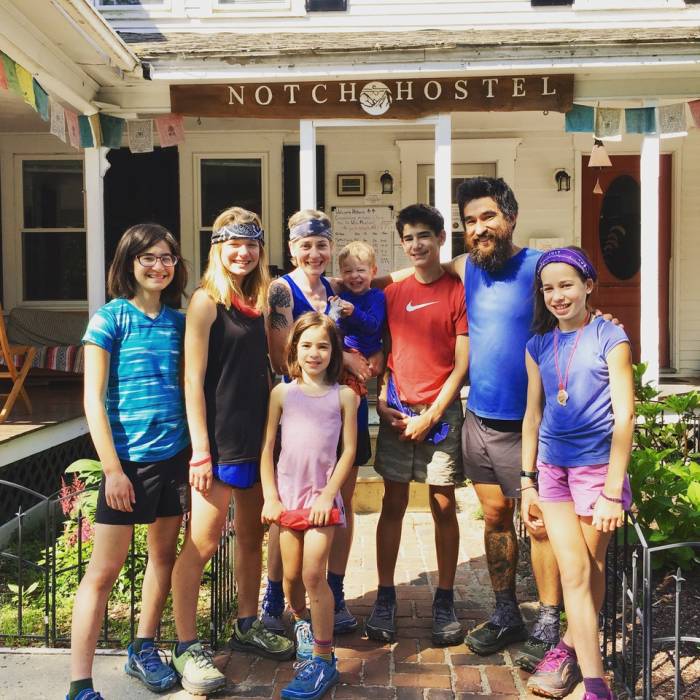 Family Thru-Hike: Why Hike the AT?

During our hike together, I learned where this family’s interest in hiking the AT originated.

While most families think of trips to Disney World with their 1-year-old, the Crawfords felt that a cross-country bike trip with their first born was the perfect way to live their family ethos. The family sought to include their children as active participants in everything they did.

On their first bike trip, they serendipitously shared a night in a Damascus, Va., hostel with some thru-hikers. There, they first learned of the Appalachian Trail. The seed was planted.

The family then returned to their hometown of Seattle, Wash., and focused on growing their family and Ben’s business. They succeeded on both counts, with five more children and a business from which Ben retired at age 30.

Their lifestyle, which included homeschooling, provided them with free time to hike the Wonderland Trail, a 93-mile loop around Mt. Rainier.

On multiple trips around Rainier, they gained experience in hiking, backpacking, and working together as a family. Thankfully, the family lived close to Rainier. Ben honed his backcountry skills and confidence as a leader, with multiple summits of the mountain. 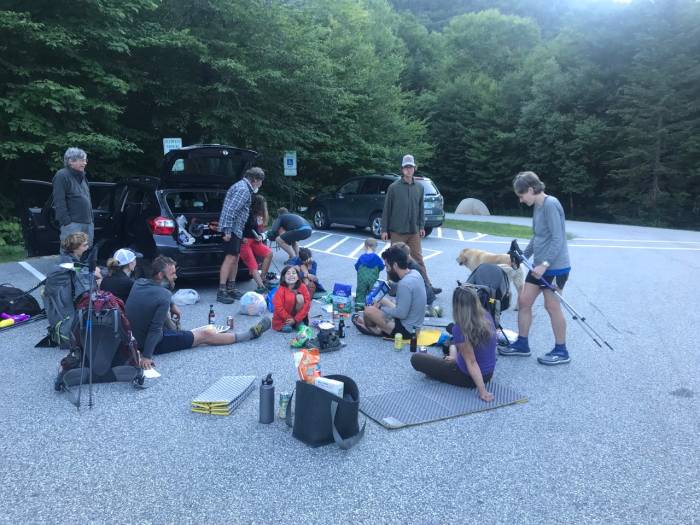 They had all but forgotten about hiking the Appalachian Trail until 2017, when Kami mentioned hiking it as a family. At that time, they determined there was nothing holding them back. All of the children were old enough and healthy, their finances were in order, and a family discussion led to a unanimous decision to do it.

On the Appalachian Trail With the Crawfords

I first met the Crawfords in the woods on the Appalachian Trail in Vermont. With a stocked YETI backpack, I brought adult- and kid-friendly cold beverages, including chocolate milk.

I hiked in with my “mid-trail magic,” and after an hour, I heard the thumping of feet and giggling voices of children. First up was 16-year-old Dove running down the trail with 2-year-old Rainier on her back.

My offer of a cold drink was greeted as she ran by with a polite, “No thank you. We are late meeting people at the road crossing.” Similar responses came from 15-year-old Seven with his sister, 13-year-old Eden, in tow. Ouch, bummer.

Then came 7-year-old Filia — surely she’d want a soda. With a huge, devious grin, she gave me another, “No, thank you.” These kids were on a mission!

A few moments later, 11-year-old Memory with parents Ben and Kami came bounding down the trail. I explained I was the person that had been “pestering” them online. They were in shock I found them, and also very excited about the cold drinks I brought along. 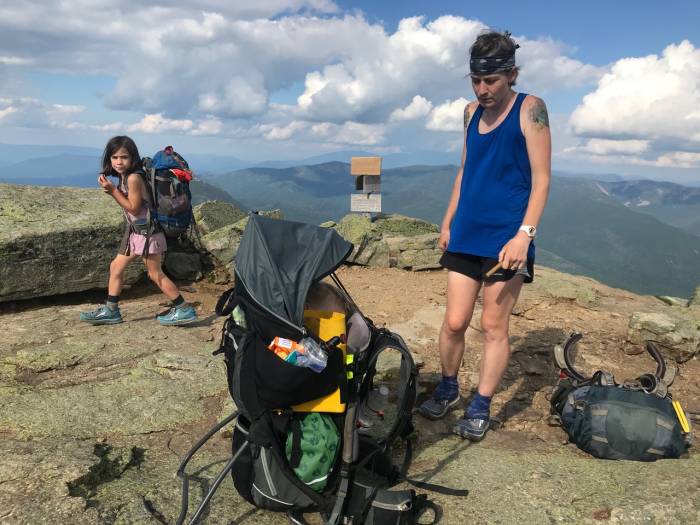 With four children ahead, and two others exploring patches of moss and berries, Ben, Kami, and I spent the last 3 miles of the day discussing family, life, and their trail experience.

Hiking With the Crawford Family

Our time together during this first meeting was shortlived, so I was elated when they accepted my offer to help them for a few days. I joined them on their trek into New Hampshire’s famed White Mountains.

I welcomed them into a hostel stay and would help them with a slackpack during the hike. (They would carry daypacks while I shuttled their packs ahead.)

A few nights later, I met them with all of Ben’s favorite food and beverages. We had a party in a parking lot with a handful of their hiking pals to celebrate his 39th birthday.

I hiked 16 miles with the family the next day and learned all about why they chose to hike, how they had made it this far, and what challenges they encountered.

Starting in March, thru-hikers always have cold and snow to contend with. In addition to sore legs, blisters, and gear adjustments, this year was unseasonably cold and snowy.

The Crawfords overcame obstacles by setting short-term goals. They discussed the goals in the morning or during evening family meetings.

What I found most impressive about the Crawford family was how they worked together as a team. I learned this the following day during a 10-mile section over Franconia Ridge. They had their full overnight packs, weighing from 27 to 44 pounds. 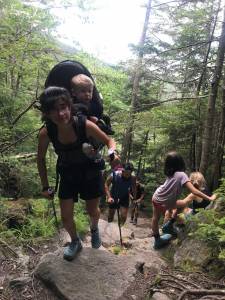 First, they designated jobs for each family member. Ben was responsible for carrying Rainier and his gear while Kami carried the 85-liter pack hauling the couple’s gear.

Each of the other children was in charge of their own gear and had an assigned task.

Individual Tasks: Backpacking With a Family

Even more impressive was the rotation they created for carrying Rainier after mile 900 when they decided to take some of the load off of Ben. The three eldest stepped in, and soon they had a four-person rotation switching Rainier and packs every 30 minutes no matter the terrain.

There were also off-trail tasks. The kids in charge of meals bought the groceries. And Ben, Kami, Rainier, and Seven started laundry and edited videos. 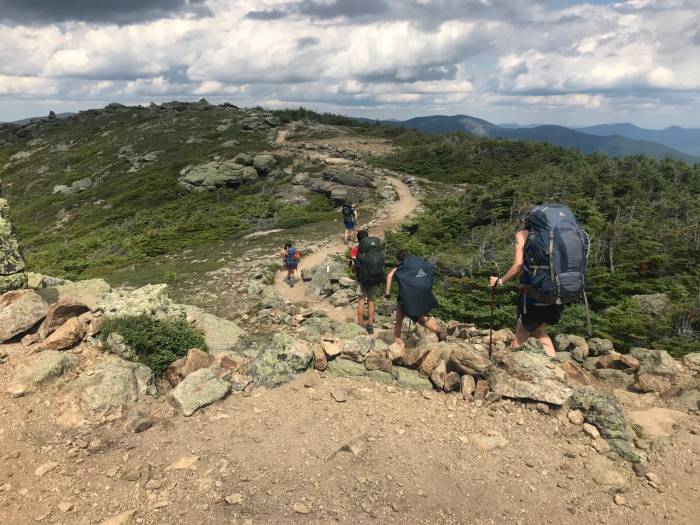 The family hiked mostly in single file, with Ben and Kami always taking up the rear. There were frequent breaks and check-ins, so they were always in touch with each other.

At camp, the kids set up Ben and Kami’s tent as well as their own. Dove worked on the huge one-pot family meal, and the parents discussed the day and plans for the trail ahead.

A Family Together on the Trail

In my time with the Crawfords, I observed while Ben assumed the leadership role. There wasn’t a goal or hardship that wasn’t discussed as a team.

Multiple times during our hike (often with Jolly Ranchers and Goldfish crackers being passed around), Ben called a family meeting to discuss tired legs and the miles ahead. Forthcoming challenges were calmly discussed, with input sought from all family members.

Being 150 miles from completing the Appalachian Trail is a considerable accomplishment. But what impressed me the most was the camaraderie, positivity, and determination of all eight family members no matter the circumstances. The Crawfords are a seemingly ordinary group of folks doing a very inspiring and extraordinary thing.