The world’s largest sporting goods retailer has remained largely unknown to U.S. consumers, but that will soon change. I toured Decathlon Sports headquarters in France for a peek at why — and how — this mega-bargain chain could alter Americans’ outdoor buying habits.

One minute, I’m walking past hiking packs, running vests, and waterproof boots, the next I’m browsing snorkels, pool toys, and lacrosse sticks. Another aisle to the left is loaded with basketballs and baseball bats, while the aisle to the right offers up puffy jackets and cycling gear.

A 10L daypack catches my eye. It has a basic yet sturdy and stylish construction. But it’s not the design that draws me in, it’s the price: $4.

Farther down the aisle, I spot a 400-lumen headlamp — waterproof, multifunctional, and rechargeable: $45. I see the same thing everywhere — $40 bib shorts, $60 trail-running shoes, even a $65 puffy. 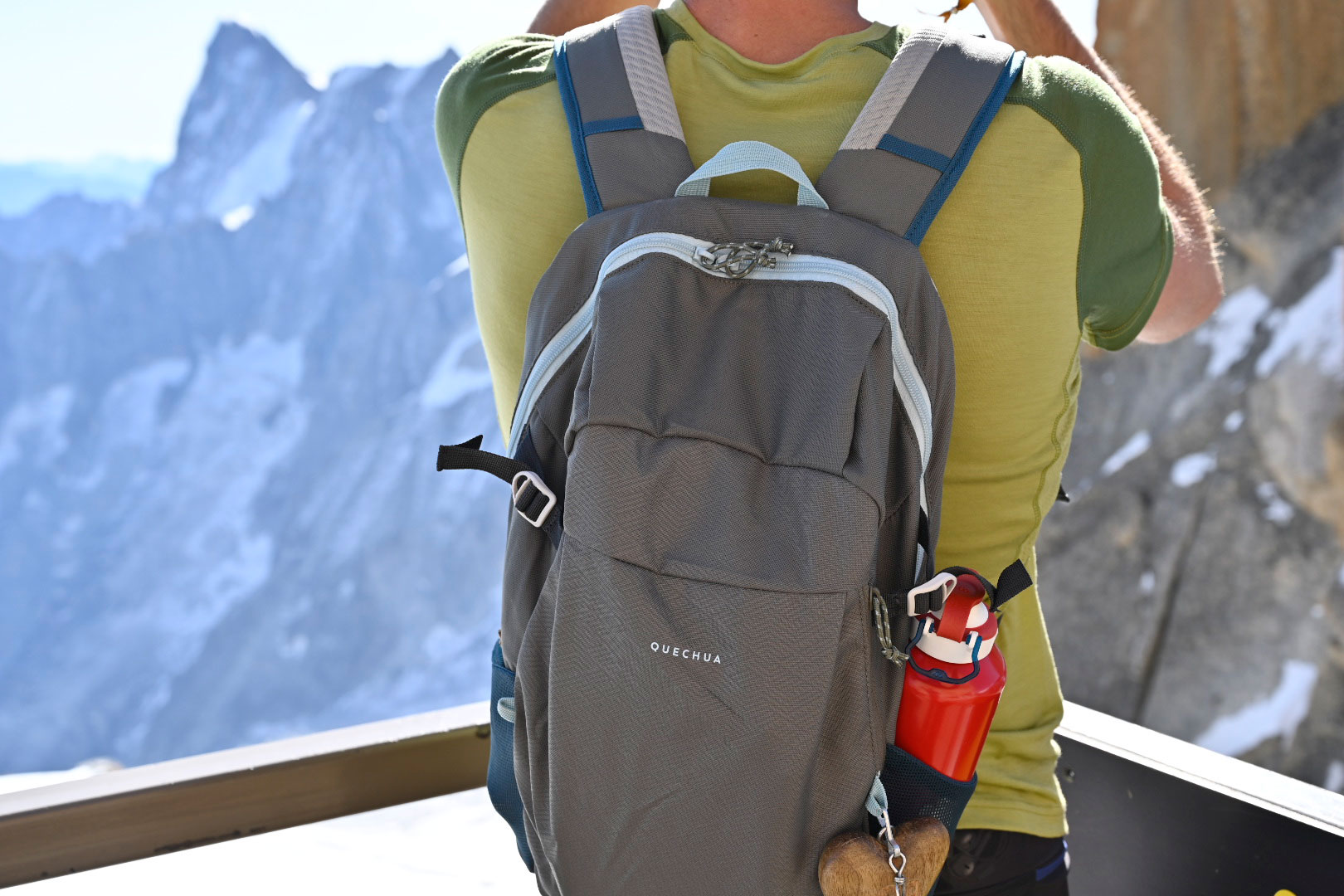 This menagerie of low-cost sporting goods is typical of all Decathlon stores. And you’d be forgiven for thinking it means the French retailer peddled cheap, poorly made wares. But there’s more to the story. Decathlon is less like a Walmart and more like an Aldi grocery store.

That’s because Decathlon is a vertically integrated company, meaning it doesn’t just own the retail stores, it owns its research and development and manufacturing as well. So almost everything Decathlon sells comes from a brand it owns. And like Aldi, they’re brands most of us have never heard of.

And this year marks the first that U.S. consumers can explore the aisles themselves. Despite a fleet of nearly 1,600 retail stores across more than 50 countries, Decathlon only just launched three stores this year in America (in San Francisco). And the $13-billion-a-year company intends to keep spreading across American soil.

One more thing sets Decathlon apart: Its shoppers are passionate and loyal to the brand. Even walking through the airport in Paris, I took note of all the squiggly line badges on travel bags — more than half by my count. It’s the logo for Quechua, a Decathlon brand that covers, among other activities, trekking, camping, and travel.

But we Yanks are a difficult bunch, and there’s no guarantee we’ll share the same fervor consumers in Europe and Asia have for the brand. Here are seven reasons Decathlon could shake up the outdoor gear industry in the U.S. — and a few reasons it may not work in it.

What Makes Decathlon So Great? 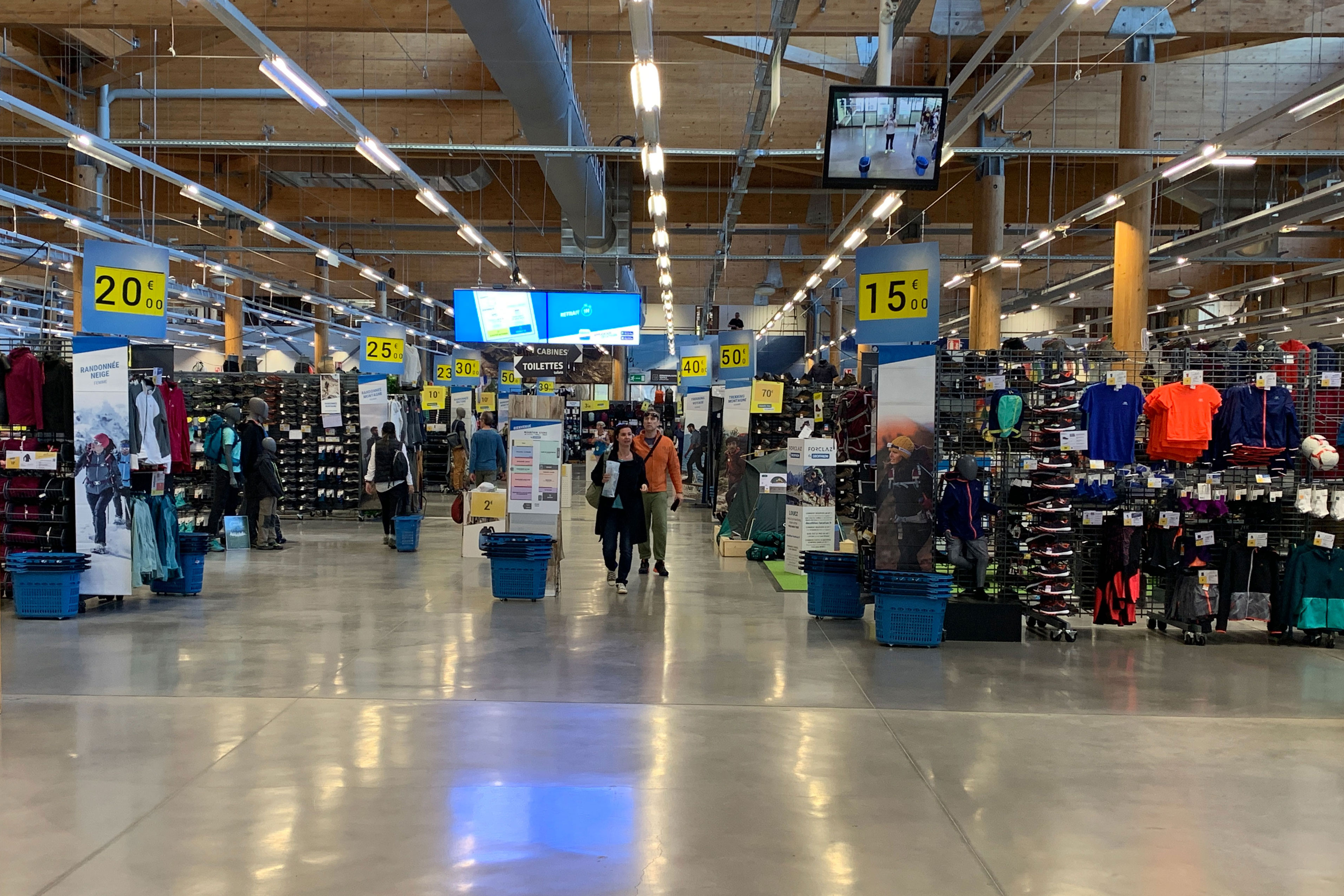 Just like the $4 hiking pack that made me double-take, a vast majority of products inside Decathlon cost markedly less than comparable name-brand products in the U.S. And that includes second-tier products, not just the biggies like Patagonia or Arc’teryx. Other ridiculous prices include two- and three-person tents for $30-40, $179 skis, and $40-45 down jackets.

Again, this is the result of Decathlon’s ability to control development, manufacturing, distribution, and retail. So it claims it cuts out middleman markups. Of course, that doesn’t mean a thing if the gear doesn’t perform well above its price point (more on that in a sec).

Decathlon’s brand mission states, “We make sports accessible for all.”

And admittedly, the brand does a great job in that realm. Not only do the prices open the door to more people, but Decathlon markets to average athletes and campers. Many of its products target the occasional camper, runner, or even cricket player.

Its bike line, for example, tiers into two brands: Van Rysel, for serious, performance-minded road cyclists; and Triban, for riders concerned with safety and comfort. In this way, Decathlon speaks to a variety of consumers and steers them toward brands and products they’re comfortable with.

Further reassuring buyers, Decathlon warranties all of its products for at least 2 years — its hiking backpacks are guaranteed for a decade — and offers free returns within the first year of purchase. 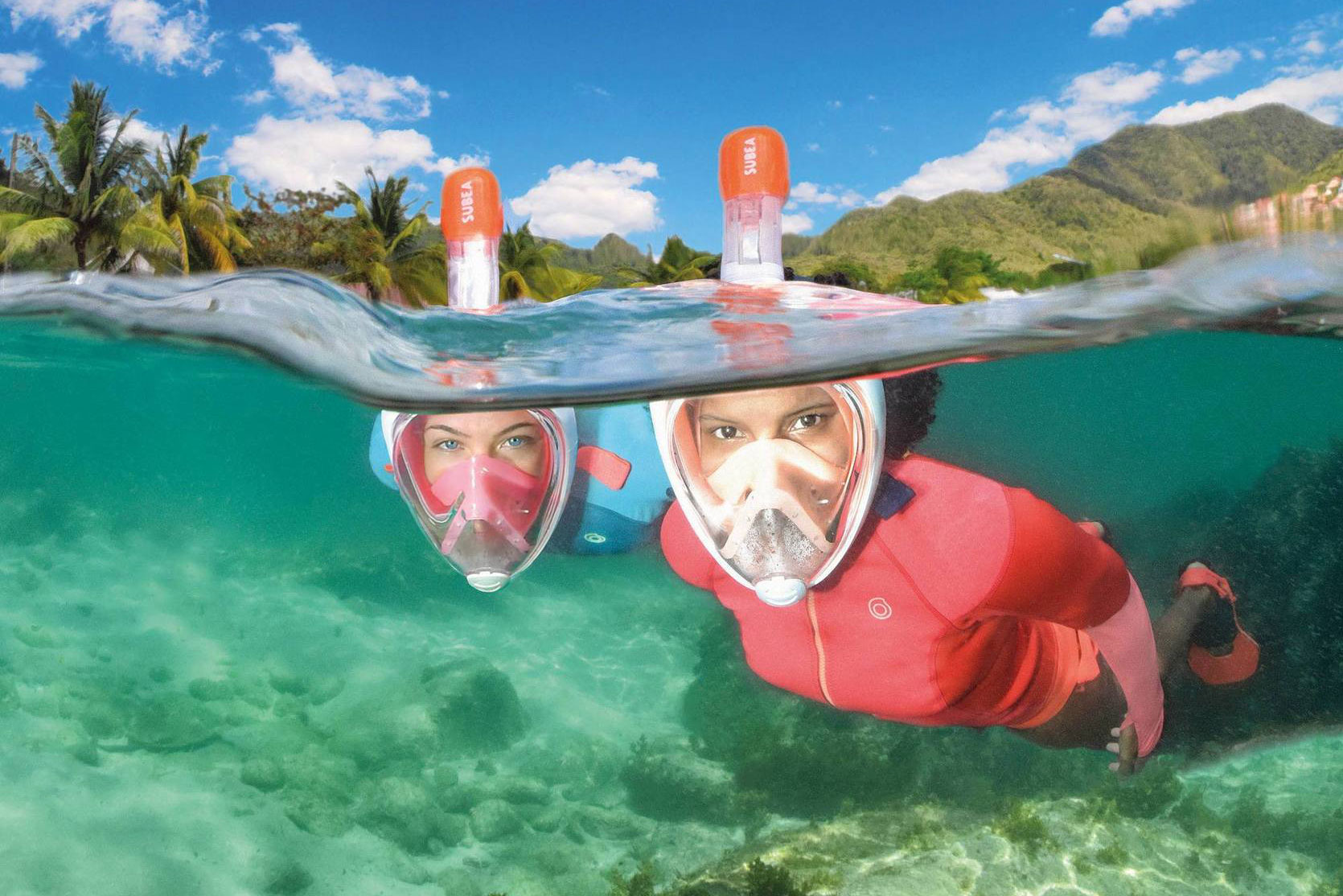 Despite its bargain-tag prices and breadth of gear, two specific products put Decathlon on the map.

A few years ago, Decathlon’s watersport brand, Subea, literally changed the face of snorkeling. The $30 Easybreath mask did away with boxy goggles and the age-old snorkel tube. In its place, Subea introduced an astronaut-like full-face mask with built-in breathing tube at the top.

The brand claims it addressed a key issue that prevented people from trying snorkeling — namely, putting a dirty, spit-riddled snorkel in their mouth.

More recently, Decathlon’s Quechua brand won over festival-goers and casual campers with its 2-second tent. Just like it sounds, the coil-sprung tent deploys into a freestanding, single-wall shelter within seconds of being opened.

To be sure, neither of these products cater to demanding elite athletes. But they may draw some dyed-in-the-wool co-op members into the store for a look at something they won’t find elsewhere. 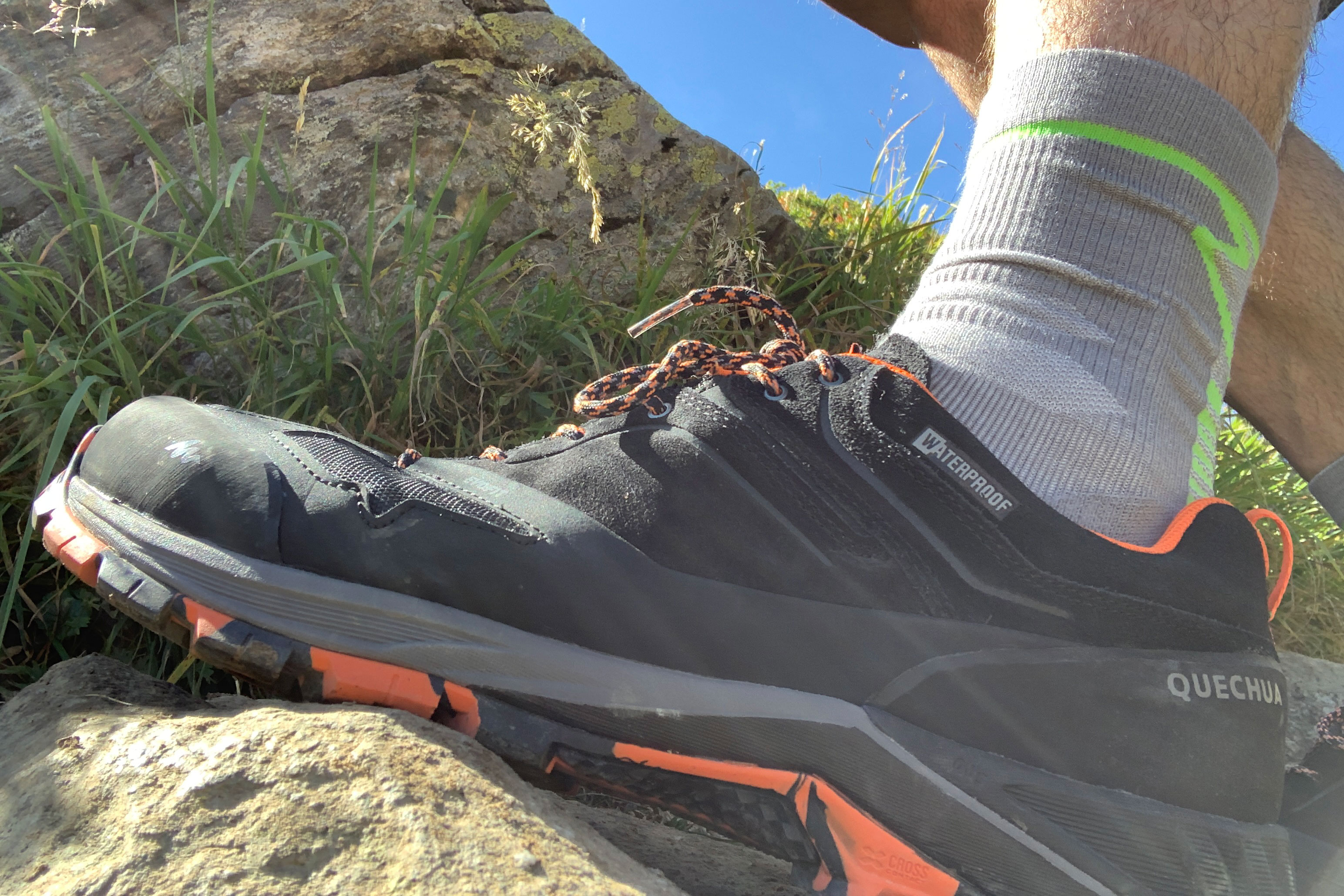 That’s in addition to sitting a stone’s throw away from the famed Paris-Roubaix cobbles. There’s also a Water Sports Center for testing swim gear, Kipstadium for team sports testing, and Decathlon’s Domyos gym, which offers a full workout facility and fitness classes where customers can try and use gear (or just work out).

While those facilities are unique to Europe, Decathlon stores globally provide in-store testing areas as well. This includes golf swing and putting zones, scooter and bike riding areas, basketball hoops, and more. And the brand told me it’s working to build more “test and buy” programs in the U.S.

The other thing Decathlon might have going for it in the USA is novelty. Decathlon may work in the U.S. in the same way and for many of the same reasons as IKEA, Trader Joe’s, and Aldi.

In addition to slashing prices and offering an alternative to the products and offerings consumers see every day, they each cornered the market for their unique shopping experience. Stepping into Decathlon and meandering the seemingly endless shelves of unheard-of brands could be the new twist on outdoor gear Americans didn’t know they were missing.

Not So Fast: Why Americans Might Not Love Decathlon

For all the reasons above, there’s a flip side to each. As popular and established as Decathlon is across Europe and Asia, it’s a newcomer to American shores.

Too Good to Be True 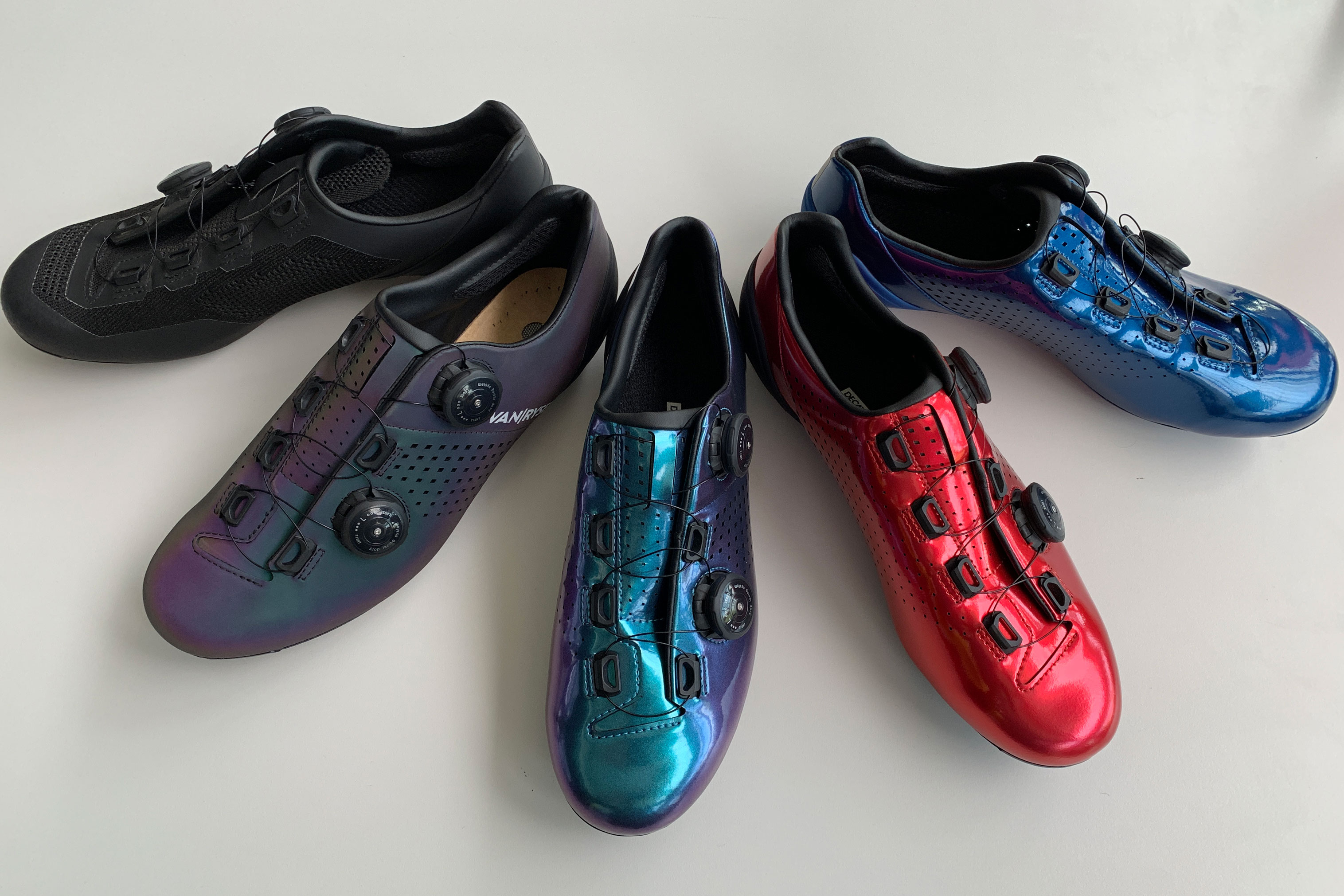 Americans love a bargain. But they hate cheap products — and that’s especially true among outdoor enthusiasts, who often depend on their gear. At this point, Decathlon and its constituent brands are unproven.

And while the low prices are attractive on their face, they may also signal alarms among U.S. shoppers, who are all too aware that “you get what you pay for.”

With tents, hiking shoes, puffy jackets, and backpacking packs, it’d be easy to say Decathlon will take on REI. But aisles of heavy bags, golf clubs, billiard balls, and badminton rackets make it a little less clear what kind of store you’re in.

It could be difficult for Decathlon to siphon customers away from REI, Cabela’s, or even Walmart if it doesn’t offer a clearcut alternative to any of them. 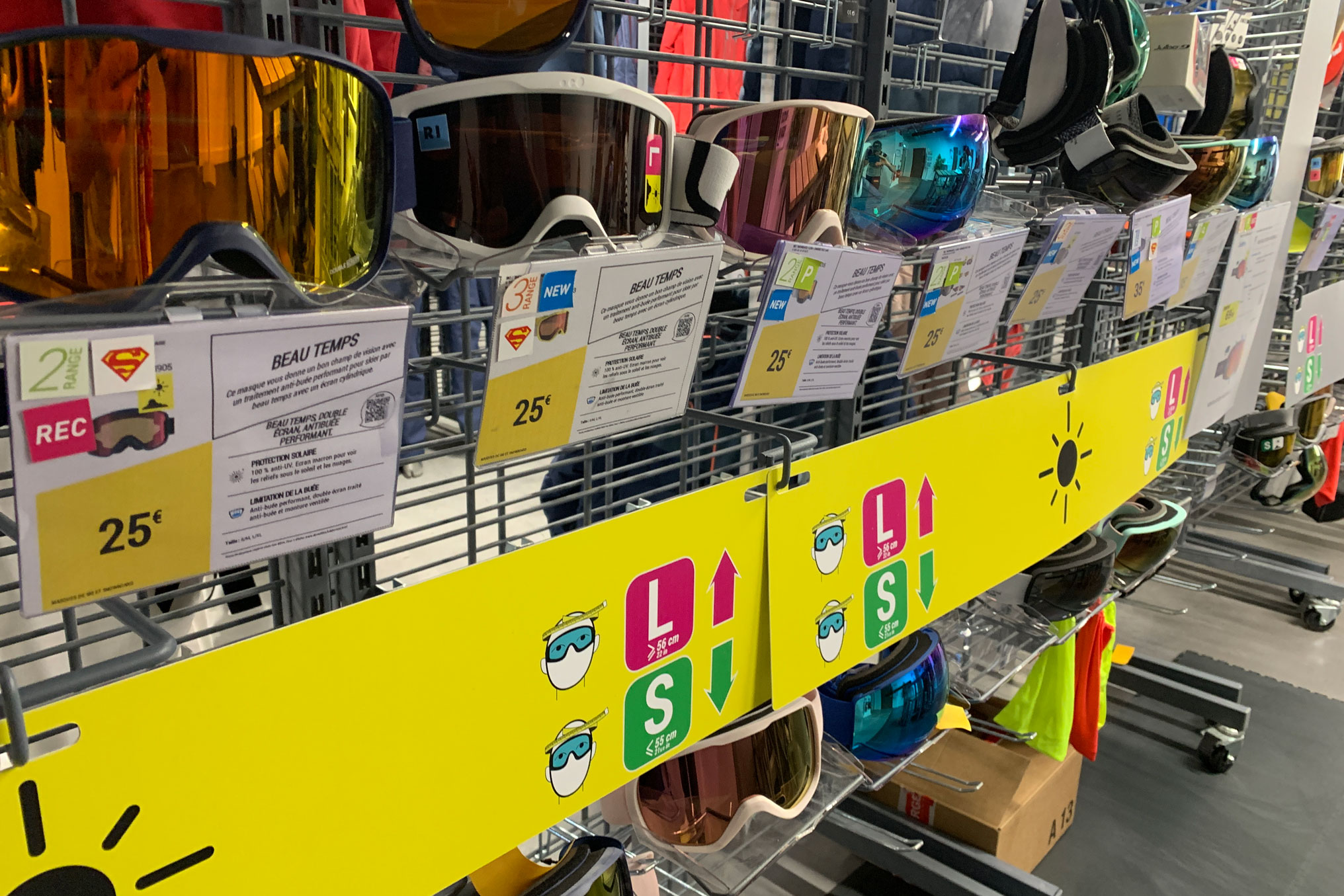 I love shopping at REI. Most people do — it’s not only a welcoming atmosphere, but it also offers an inviting and attractive space to peruse gear. Large fireplaces, open floor plans, and short, meandering aisles offer a stark contrast to the box-store vibe.

Many of the Decathlon stores I visited maintain a boxy feel with high aisles, white tile floors, and fluorescent lighting. It’s not bad on its own, but it conjures feelings of being in a Walmart — not the experience most outdoor gear shoppers are looking for.

That said, I did visit a “hybrid” store in France that provided a much different feel — darker lighting, more intimate displays, and a non-boxy layout. A representative for the brand told me the store aesthetic is something it’s monitoring as it eyes more U.S. stores.

If it ain’t broke, don’t fix it. Americans love Patagonia, The North Face, Columbia, and other household names. They know what to expect, and the brands provide.

Oftentimes, that trumps the sticker shock those brands carry. While impossible-to-pronounce Swedish names didn’t stop IKEA from winning over American furniture shoppers, how many furniture brands were household names to begin with?

Quechua, Forclaz, Triban, and the rest of the Decathlon family are mainstays in Europe. But it remains to be seen if they can win the trust and recognition necessary to succeed in the already-crowded American outdoor gear market. 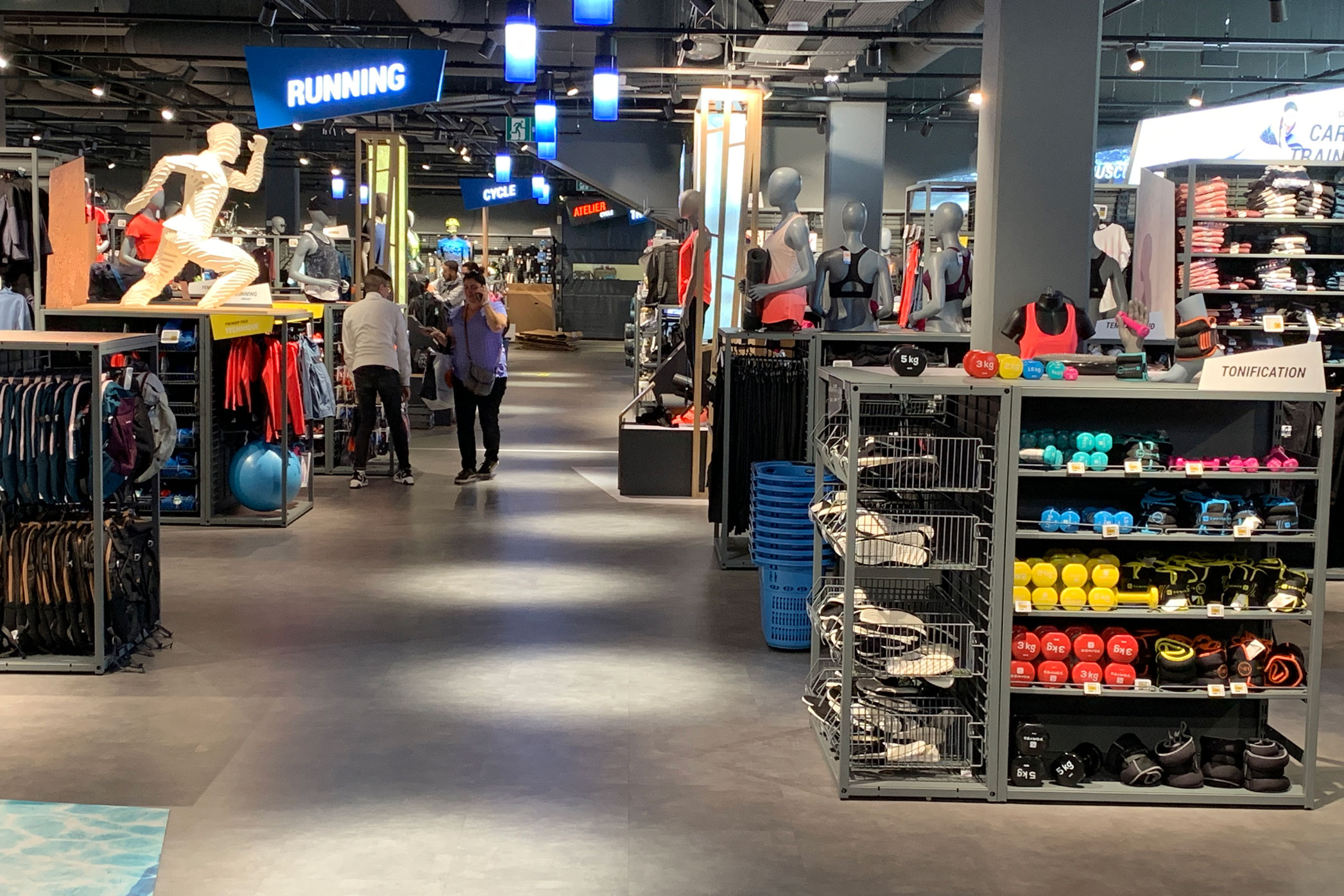 Ultimately, Decathlon’s success will hinge on its quality — a factor we will suss out in the months and years to come. As brands like YETI showed in years past, Americans won’t think twice to pay top dollar and become fiercely loyal to a brand if that brand kicks ass in the field.

If you live in the Bay Area, Decathlon has two stores in operation and a third on track to open in November. The brand told me it’s very interested in expanding throughout the U.S. but offered no specifics. It’s closely watching how the San Francisco stores perform before making any further announcements.

So until then, you can wander the virtual aisles at decathlon.com. And skip all the pool toys.

Up Next: Editors’ Take: Behind This Week’s Biggest Headlines