The world’s longest unbroken network of land and water trails will open next year in Canada, spanning the entire country. 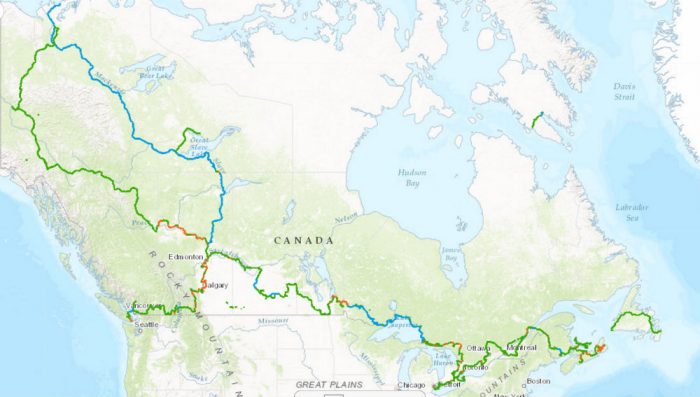 While impressive, we use quotes around trail because upon completion the route will consist of forested paths, canoe routes, urban walkways, streets, logging roads, and secondary highways.

It’s all linked by a huge map, available online. Signage across the country on segments of the trail will connect it all in the real world.

No small feat; if you were to hike, bike, and paddle the route it would eclipse a thru-hike on the Pacific Crest Trail by more than five times.

Human Power Across Canada In 2017

Now about 90 percent complete, the TCT (also dubbed “The Great Trail”) will connect the east, west, and north coasts of Canada.

All manner of human power and some horsepower (snowmobiles) and actual horses, can literally travel from the Pacific Ocean, up to the rim of the Arctic, and down across to the Atlantic. Follow the signs to make your way across the country.

When finished, the TCT will cross 13 provinces and territories. It will reach north from the Yukon and connect with British Columbia to the west and as far east as Newfoundland.

Next year marks 150 years since Canada’s confederation. The connected network of land and water trails is touted as “a gift from Canadians to Canadians.”

The vision for the Great Trail began in 1992. Since then, the non-profit Trans Canada Trail has worked with national and municipal government bodies, sponsoring corporations, and grant foundations to fund the massive undertaking.

Last month, we reported on the half-completed 3,000-mile East Coast Greenway. That on- and off-road trail connects Maine to Florida.

America’s Triple Crown of trails — Pacific Crest, Appalachian, and Continental Divide — are hallmark domestic routes. The PCT stretches 2,700 miles from Mexico to Canada. The AT worms 2,200 miles from Maine to Georgia. And the CDT extends 3,100 miles from New Mexico to Montana.

The Great Trail in Canada will dwarf all of those trails combined. It’s a noble push and an exciting addition to the world of ultra-long human routes.

What are you up to in 2017? We’re eager to get our boots, skis, bikes, boats, and wheels on this trail to explore Canada coast to coast (to coast).