Of course you’ve seen dogs on the trail. But have you ever spotted a cat? Meet Tuxie, the cat that loves to hike. 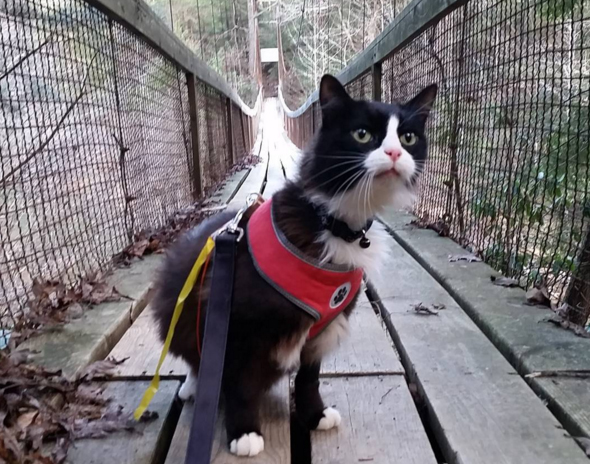 Tuxie is the hiking companion of “L.A.,” also known as HikingDiva on Instagram. The duo hits the trails in the Southeast U.S., from Georgia to Tennessee, Alabama, North Carolina, and South Carolina. They live in Atlanta.

After we noticed a comment that “cats hike too!” on a GearJunkie Facebook post, we decided to investigate the hiking cat a little more. Turns out, he’s the real deal, pawing out up to eight miles a day and has completed about 80 hikes with L.A.

We asked L.A. some questions to learn more about this remarkable hiking cat known as Tuxie. 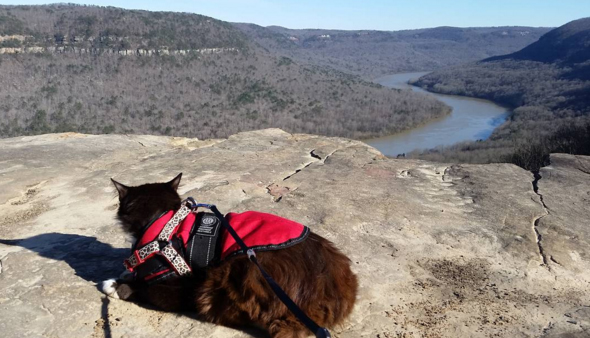 What on Earth ever possessed you to take your cat hiking?

I had major hip surgery and couldn’t backpack. Had heard about a woman out west who had gotten lost hiking with her cat for two or three weeks, so I thought I would bring him car camping with me for company.

I really had no expectation of Tuxie actually hiking, I put a harness/leash on him in case he got loose. For a while, I carried him along in a daypack with his head poking out. Then, I put him down and he started walking, and he stayed on the trail.

How many hikes have you done so far?

We have been hiking for three years, but we only hike late October – March because of snakes, skunks, and more people on the trails. We’ve probably done over 80 hikes so far.

How far will your cat hike in a day?

Most hikes are in the five-mile range, but he has done eight miles.

Do you have any say in where you go, or is the cat entirely in charge?

We stay on the trail, but I will let him explore rock overhangs and creeks with supervision. I’m in charge, plus I carry the treats and brush. We are all about a mid-hike fluff! 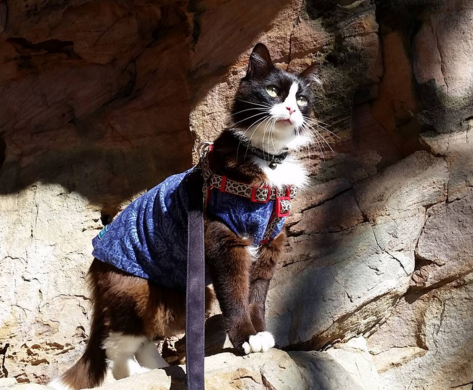 If you go hiking, and don’t take Tuxie, does he get jealous or spiteful?

When he sees me packing up the gear, he usually goes and sits on top of it. Our season is wrapping up, and I’m sure he will be bummed. But he is a cat, so he’s pretty chill regardless.

If he wants to go somewhere other than where I want, I say “let’s go this way” and he usually obeys. I try not to yell commands because it just startles him. Lots of “good boys” encourages him as we hike. We have arguments at times, he is not vocal at home, but on the trail, he voices his opinion and talks a lot, and his tail says a lot too. (#DatTail on Instagram says it all).

Can you let him off leash?

I can, but the trails we are on require animals to be leashed. Plus, I worry about him getting into a cave or jumping up higher than I can climb (I have vertigo).

Have you had any scary encounters with dogs or other animals in the outdoors?

I’m fast to scoop him up when dogs are on the trail. Tuxie was unimpressed with bear and coyote scat. He was fascinated (at a distance) with deer. We came upon a spot where some feral hog had dug up and Tuxie started making howls I had never heard before…then he pooped in the middle of it. That cracked me up. 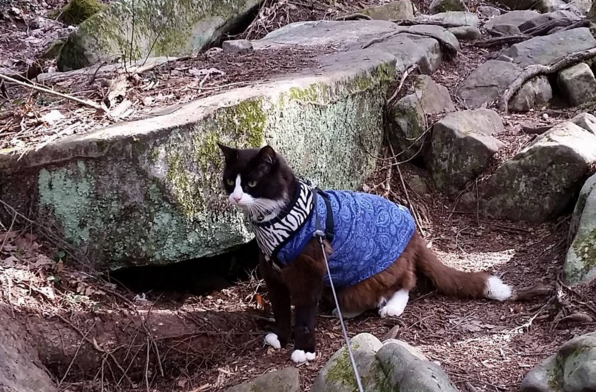 In our first year of hiking, I tripped/stumbled and dropped the leash and he took off. I then spent two hours looking for him–other hikers were looking for him as well, and we found his leash/harness nearby. I kept saying Tuxie never goes off the trail… sure enough, we found him under a small rock overhang on the trail. That is why I keep a bright colored shirt/jacket on him (with my contact info), it makes him more visible and helps keep the harness on. Thankfully, we’ve never had another incident like that.

That’s also, why we only hike in cooler months: Tuxie laid down two years ago on the trail, indicating he was done for a while. I got him in the pack and not 20 feet ahead there was a four-foot rattlesnake that I almost stepped on.

How does Tuxie behave in a tent?

He is great at pre-warming the sleeping bag. My backpacking tent doesn’t have a lot of mesh at eye level for him to look out, so he prefers sleeping in the hammock. The swinging after a long hike knocks him out. The only downside—he snores.

Tuxie sometimes can’t wait to get in his tent!

You don’t carry a litter box I’m guessing. Do you bring a “kitty bag?”

I bring a litter box for the car, and if car camping, I put it in the tent. He is a morning pooper, so we take care of “business” before hitting the trail.

Does Tuxie ever just quit on the trail and make you carry him?

If dogs approach, I scoop him up. He isn’t great if there is a group approaching, he pancakes (lays flat on ground – which can be problematic if it is muddy). 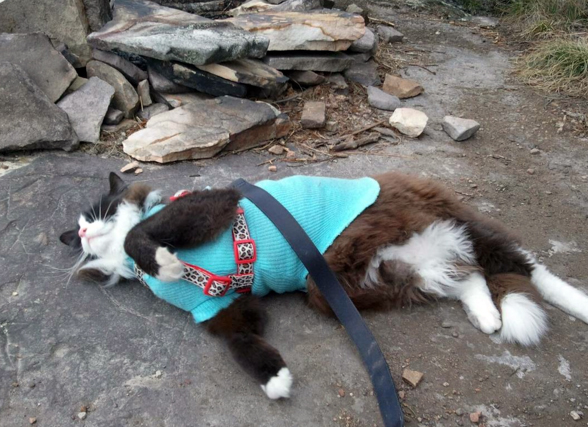 If he is tired or not in the mood to hike, he sits and I usually carry him about 30 seconds before he wants to get down. If he doesn’t want to hike anymore, he lies down (which is his way of saying he wants to get in his catpack) or crawls over my shoulder into his “catpack.”

What is the first piece of advice you’d give to others who want to hike with a cat?

You cannot train a cat to hike, your cat will teach you what it will tolerate. And have tons of patience.

Have you ever seen other hikers with a cat?

Amusingly, yes. Both Tuxie and the other cat were shocked. There are LOTS of hiking cats… adventurecats.org will blow your mind (there is a skiing cat – Tuxie needs to step up his game!)

Does Tuxie enrich your hiking experience?

Hiking with Tuxie is a slower pace. My choice in trails is different because I take him on less busy trails, usually midweek, early morning starts, and ones with lots of rocks for him to climb. Seeing how excited he gets as we get to the trailhead says it all.

You mention that you have other cats that don’t hike; how did you know Tuxie would be a fit for the trail?

Tuxie is more curious, but I had no idea it would work. His sister is not adventurous, but a snuggler. Our third cat doesn’t even like to go outdoors. All three are feral rescues.

How old is Tuxie? How long has he hiked with you?

Tuxie is seven, we have been hiking for three years. 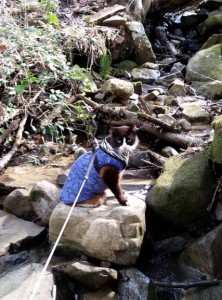 What’s the funniest comment you’ve ever gotten on the trail?

A park ranger said he thought Tuxie was a skunk at first, but it wasn’t the strangest thing he had seen on the trail—he saw a monkey hiking once.

Any other advice for folks who would like to take cats hiking?

Lots of people want to start their cats hiking. I always caution them that it takes a while to get a cat to hike. The cat’s safety and enjoyment is most important. I’m super vigilant about his safety. The website adventurecats.org has a lot of helpful info to get started (I go further than their recommendations).

And, in December, Tuxie had a mass taken off his shoulder; the vets said it was most likely malignant, but, thankfully, it came back benign. He is on the lookout for a Tuna Sponsorship as a pro-athlete!