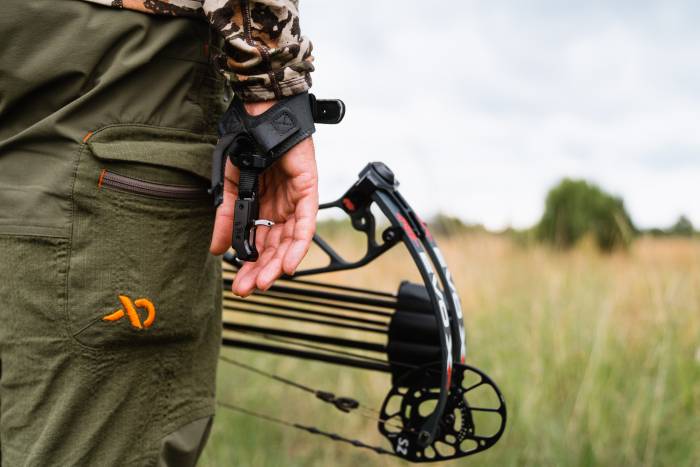 A simple design that delivers exceptional results. The Carter Like Mike II is a workhorse of an archery release aid.

There are just some pieces of gear that seem to always pop up in conversation, be it a certain tent, a jacket, or a pair of boots. And sooner or later, you’ve just got to try out that piece of gear for yourself. This is exactly how I felt about the Carter Like Mike II index-style release aid.

After hearing so many good things from other diehard bowhunters, I didn’t have a choice but to try this archery release out for myself.

In short: The Carter Like Mike II checks all of the boxes hardcore bowhunters are looking for in a release. For the casual bowhunter, though, the price may be a little steep.

The Like Mike II is an upgraded version of Carter’s extremely popular Like Mike. Some of the improvements are an updated tension adjustment and their new Controlled Engagement System.

This wrist strap index style release has an open hook design for fast D-loop acquisition, as well as an easily adjustable web connection from strap to trigger. The trigger locks into place by simply pressing a button on the belly of the release.

Its Flex Connector wrist strap is fully adjustable as well, made to fit a wide variety of hand sizes and reduce torque at full draw.

Along with the release inside the packaging, you’ll find an appropriately sized Allen key, directions, and an extra steel ball to vastly increase the trigger tension if desired.

These are a few useful features that stood out to me with the Carter Like Mike II.

Most trigger positions on index-style releases sit more forward. This is fine, but if you’re someone that prefers to fully wrap your index finger around the trigger, it makes doing so quite difficult.

The Like Mike II, however, has a deep trigger position, meaning the trigger is located farther back. This feature promotes achieving that full hook, which just plain leads to better shooting with an index release and less trigger punching.

Trigger tension is the amount of force it takes to engage the trigger. The Like Mike II has adjustable trigger tension. All you need is a small Allen key, which is provided in the package if you don’t happen to already have your own.

Adjustable trigger tension is quite standard, but what’s beautiful is the wide range of tension this release offers. From the factory, you’ll have a range between 10 ounces and 3.5 pounds.

And if an even heavier trigger is desired, just install the supplied steel ball. That will raise the tension up to 11 pounds.

Trigger travel is the distance between a trigger at rest and when the sear breaks to engage the shot. The absence of trigger travel is something that is quite important to seasoned shooters. Usually, there is an adjustment on releases to adjust this trigger travel.

With the Like Mike II and its Controlled Engagement System, there is no need. The sear engagement is controlled internally and is based on tolerance. This creates a no-movement type of trigger and no need at all for a trigger travel adjustment screw.

There are a few mandatory items I require when it comes to an index release. They are a web connection, the ability to set the trigger heavy, and a deep trigger position.

These things allow me to shoot an index the way I prefer in a way that works best for me. The Like Mike II answered all of it.

One of the first things I noticed was how simple of a design this release is. It’s far from a confusing layout, and per the very short instructions, I was able to get everything adjusted to my liking in a few minutes.

This is something I’ve struggled with a bit when it comes to other releases in the past. Features and adjustments are great, but too many make it somewhat overwhelming. Sometimes simpler is better.

Shooting with the Like Mike II is a pleasure. The crisp no-travel trigger feels fantastic, as does the release in my hand.

It did take me a second to figure out how to actually lock the hook, which is done via a small button on the belly of the release. It just blends in so well that I didn’t realize it was a button. After that, though, it was all systems go and time to go hunting.

I’ve taken the Like Mike II on a few different hunts now in a wide variety of weather conditions. As of right now, I haven’t had any malfunctions, which sounds par for the course from what I’ve heard from others.

It’s just a solid dependable release all the way around. And I even got to operate it in the heat of the moment arrowing a mule deer buck in Utah. Made a perfect shot and had a nice heavy backpack because of it.

I know it sounds perfect and it is … almost.

Web Gets in the Way

The first downside that stuck out to me was the excess material of the web connection. There is a crazy excessive amount of it, and I’m sure it’s there to ensure that you can set it as long or short as you want. However, once that’s done, you’ll for sure need to cut the excess off and burn the ends so they don’t fray.

After doing this, I noticed that sometimes this excess gets in the way when I’m at full draw. It tends to cover a certain anchor point on the body of the release that I use — a thing that is more annoying than anything but worth mentioning. I suppose I could just cut it even shorter.

Not Easy on the Wallet

I am a person that will confidently say, “you get what you pay for.” However, everyone has a budget, and that needs to be addressed.

The Like Mike II sits just south of $200, which for the hardcore bowhunter is much easier to swallow than the casual weekend-warrior type. Those folks will likely be pushed more toward the sea of more affordable options. That’s a real bummer because they’re missing out on the undeniable performance this release offers.

The Like Mike II is roughly double the price of most higher-end index releases, which makes it one of the most, if not the most, expensive index-style on the market.

When the time clock is punched, the Like Mike II from Carter lands in the pool of exceptional. It’s the best of the best in terms of index-style releases, from the simple design to the durable construction and seamless functionality and effectiveness.

Yes, the price may be steep, but we only get so many bowhunting opportunities. We need gear that we can depend on when it counts the most. The Carter Like Mike II is a piece of gear you can take to the bank.