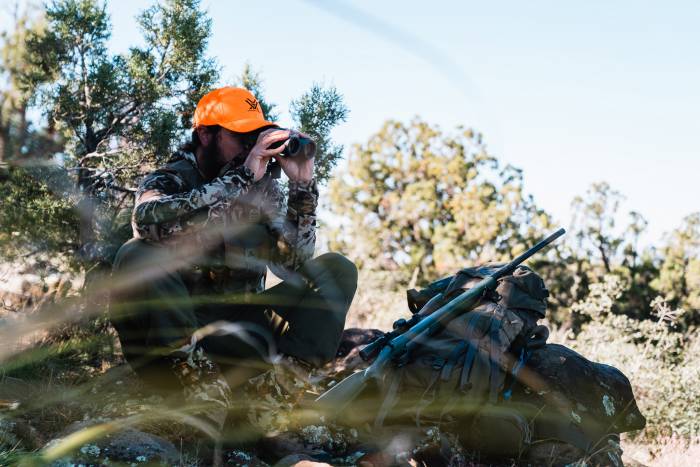 Opportunities to hunt fall bears in the West are vast, but it’s no easy feat.

If you asked 10 hunters what season comes to mind when you say bear hunting, I’m betting nine of those hunters would say spring. Rightfully so. Spring is a fantastic time to be out in the mountains. You get to watch the flowers start to bloom and be the first to see bears waking up after a long winter’s nap.

Not to mention, there are no other major big game seasons going on besides turkey. With that being said, I’m certainly the one out of 10 who would say fall.

Fall holds some incredible bear-hunting opportunities that not many take advantage of. Those who try and find struggle seem to do so because they’re trying to hunt bear the same way they do in the spring. It’s the same animal, yes, but a different time of year calls for a different approach.

Not to mention, those scraggly, hungry spring bears are now thick after their summer feasting; a chase worth making.

Finding these fall bears is the hardest part of finding success. I’m going to break down some proven tactics that have helped me fill my freezer with fall bears year after year.

Bear Locations in Spring vs. Fall

In order to better understand how to hunt bears in the fall, we need to look at their motivations given the time of year.

Bears can be found beneath snowlines and pretty close to denning sights in the springtime, especially early spring. This occurs mainly at low to mid-elevations (2k-5k).

They don’t move around a lot right when they wake up and will gradually increase the distance they travel from their den as the spring progresses. They are trying to get their systems back up and properly running during this time.

They do this by eating fresh, colorful vegetation. Grass, flowers, and leaves are all on the menu. It’s easy on their tummies and helps “get things moving” again.

Once fall comes, bears are now in a full-on feeding frenzy. They’ll gorge themselves on whatever the available food sources are as they put on as much fat as possible before the coming winter. This constant pursuit of food can push them upward of 100 miles from where they came from in the spring.

During this time, we typically find bears in mid-to-high elevations (5k-11k). They move up higher than you’d find them in the spring because that’s where the majority of their fall food is. Edible plants are rocking and rolling up there, and a ton of wildlife sticks to high ground before snow flies.

Bears feed throughout the day, with a significant emphasis on the first and last hours of daylight.

The first thing I do after picking a unit to hunt is get my maps out and start narrowing in on the drainages said country offers. Drainages, more times than not, offer a bear everything it needs for survival. Those things are havens of food, water, and security.

What I’m looking for in a drainage is one with water running in the bottom and secondary drainages (fingers) coming off of those main ridges. Drainages, canyons, cuts, whatever you want to call them, are typically great locations to start looking for bears. And the steeper, the better.

The hard part is finding the right drainage to hunt. This is a question that can only be answered through hard work and a lot of trial and error.

The hunter that takes the time to do their research on fall bear food sources ahead of time is the one that will usually come out on top. This is relatively easy via a quick Google search or by scanning local hunting forums for info on the topic.

Search for common food sources that black bears consume in the fall based on the locality of your hunt. An example would be searching for “Colorado fall bear food sources.”

Make a list of those main foods and learn what they look like when they ripen. Also, take note of what elevations those food sources occur most prevalently.

You’ll likely learn more about plants on your quest to become a successful fall bear hunter than anything else.

Popular Fall Bear Foods Include but Are Not Limited To:

Once you’ve done your research on food sources, now it’s time to get out there and start looking. I call this “proofing the food,” and it’s crucial. You can’t just bank on a certain species of plant fruiting every single year, in the same spot, at the same time. Mother Nature doesn’t work like that.

Rainfall totals fluctuate and significantly impact fall crop yields from year to year. Because of that, you will have to put boots on the ground and physically look for that grub. If it’s there, great. If it’s not, move on. The bears will not be where the food is not.

Throughout your endeavors, knowing what a bear sign looks like is essential. Some of it is pretty subtle and can go unnoticed by the untrained eye. Of course, there are the obvious markers, like tracks and scat. However, there are also busted-up logs, flipped rocks, and trees stripped of bark, just to name a few.

Be on the lookout for these subtleties, as they could pave a path to success you might otherwise step right over.

During the springtime, it’s a fairly popular practice not to start hunting bears until mid-morning. Without getting too deep in the weeds on this falsity, I don’t recommend taking this tactic into the fall.

Fall, and especially early fall, can be pretty warm. The heat of the day typically pushes bear movement to just the first and last hour of light. Because of this, it’s imperative that you are in your spot before daylight and then again into the dark.

I don’t care if you’re glassing, sitting, or calling, be there early and late. You’ve got a headlamp for a reason. Use it.

Note: As fall progresses and the weather cools, bears will move more often throughout the day.

Water is a non-negotiable feature for me when looking for bears in the fall. Not only does it need to be present for the bears to be present, but it also offers an excellent hunting tactic. I’ve never met a bear that didn’t love water.

Sitting water is a tried-and-true method of bear hunting in the fall, particularly during drought years. The bears will lay in it, play in it, and of course, get a drink. When doing this, you must have the right wind. Bears have an uncanny sense of smell; if your wind is bad, you’re wasting your time.

I’ve had better luck sitting in natural brush blinds when doing this than the pop-up blinds sold in stores. They aren’t as off-putting and out of place to a bear. I’ve also found success sitting high above canyon bottoms and watching water sources from afar with a rifle.

More than any other time of year, I feel that predator calling in the fall is the most productive time to call in a bear. They are indeed a predator, and remember what I said about them being in a feeding frenzy?

I’ve had bears run straight toward me as I was predator-calling during the fall. As far as calls go, I love the Arizona Game Calls T Rex. It’s simple and it works.

You’ll want to call for at least 30 minutes at a time, but 45-60 minutes is ideal. Bears get sidetracked quite easily, and if you stop calling, they might just stop coming.

Try to set up against a tree or boulder to have something at your back. Also, being on a feature that will require the bear to show himself when coming in to investigate would be best.

For instance, put yourself at the mouth of a small rise. The bear would have to climb up that into your view, offering a shot. If a bear can see where the call is coming from a long way out, it may not close the distance all the way.

And don’t forget your wind. Never forget your wind. The bear will likely try and get upwind of you on their approach. For that reason, I like to call with the wind or with a crosswind. That will cause the bear to move somewhere in front of you for a shot.

If it can be glassed, then spot-and-stalking is an excellent method. In a thicker country, sitting in travel corridors, still hunting, and predator calling are all superb ways of finding success. 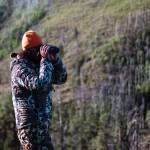 Warmer temps, flowers, and bears, oh my! Here is spot and stalk spring bear hunting in a nutshell. Read more…